A coalition of over 20 dissident organizations spanning 11 provinces in Cuba recently held a “Congress of the Cuban Nation” to address not just the eradication of communism, but the republic that should replace it, the Assembly for the Cuban Resistance confirmed to Breitbart News on Friday.

The Assembly of the Cuban Resistance is a coalition of pro-democracy, human rights groups both on the island and in the diaspora, many of which participated in the Congress of the Cuban Nation. Many of its member groups participated in the discussions. The events – 63 different meetings addressing topics from the reunification of the island population with the Cuban diaspora to the creation of “joint commissions for the transition and reconstruction” of the country following 62 years of communism – took place last week. They served as a vision of what a Congress representing all facets of a nation should be, the dissidents contended, in contrast to the Eighth Congress of the Cuban Communist Party, taking place this week.

The Communist Party is the only legal party in Cuba and, under the rule of the Castro dictators, has remained in power since President Fulgencio Batista fled the country in 1959. Prior to that date, Cuba functioned as a republic since its founding in 1902. The Party dictates all priorities and investments of the Cuban government and controls the nation’s entire economy, profiting the most from control of the nation’s lucrative tourism industry and its slave-doctor network, which the Organization of American States (OAS) has declared a form of human trafficking.

Tensions among the general population in Cuba have escalated in the past year as the island has experienced a particularly severe outbreak of Chinese coronavirus after the Communist Party initially welcomed tourists while the rest of the world shut down. Italian tourists were the first people to test positive for Chinese coronavirus on the island, according to government statistics. Exacerbating the problem are densely-populated food ration lines and the use of poorly administered prison camps to isolate suspected coronavirus patients.

The Congress of the Cuban Nation differed from prior dissident events in that it attempted to shift the focus of the pro-democracy community away from solely opposing the dictatorship in power and towards solving the mounting list of problems the Cuban people face – proving the Cuban people can govern themselves. The movement towards illicitly exercising the right to self-governance under communism, in addition to protesting the region, is the start of a shift towards liberation events planned for the 120th anniversary of the Republic of Cuba in 2022, according to Orlando Gutiérrez-Boronat, the director of the Assembly of the Cuban Resistance. 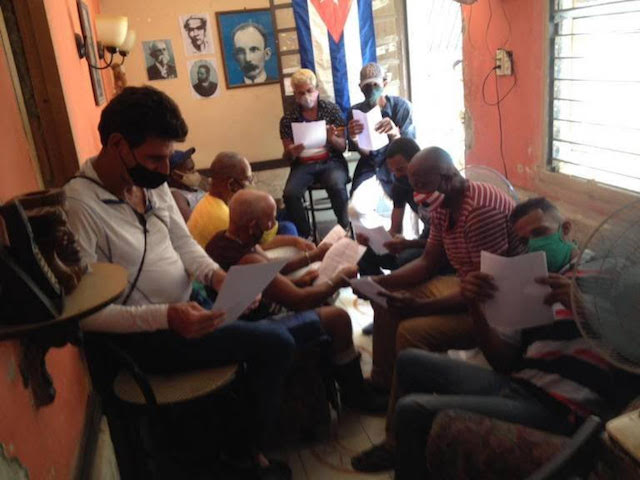 Congress of the Cuban Nation, May 2021. The Vicente Méndez Movement meeting in Havana. Courtesy the Cuban Democratic Directorate (Directorio).

The Congress also served to shift the movement towards a leaderless, more open structure making it more difficult for the Cuban state to imprison, torture, and silence dissidents, emulating a greater shift towards leaderless anti-authoritarian movements in other communist areas like Belarus and Hong Kong. Many of those in attendance at the dissident Congress also participated in nationwide protests in April calling for the freedom of 47 pro-democracy dissidents in Hong Kong, currently held under charges of violating China’s illegitimate “national security” law. Under the “one country, two systems” policy, Beijing has no power to implement laws in Hong Kong, and Hong Kong’s detention of dissidents under the national security law is itself illegal.

Among the issues on the agenda for the dissident Congress were the longtime repression of labor unions on the island – despite the Communist Party claiming to represent workers; violence against women, of which the state is a significant perpetrator; and a “national strike” to paralyze the Communist Party, a form of protest seen more often in Latin America undertaken by leftist labor groups.

“The different sectors active in the Congress made the decision that the only way to achieve social revindication and respect for human rights is taking to the streets to demand them civically,” documents distributed to all cells of the Congress read in part, urging members to “work tirelessly to achieve unity among the forces of the resistance organized by parties, movements, unions, professionals, and independent activists throughout the nation.”

The documents featured photos of the events and displayed both the flag of the Republic of Cuba and the first flag ever used, in 1868, to represent Cuba as a sovereign nation, at the start of the war of independence against Spain. 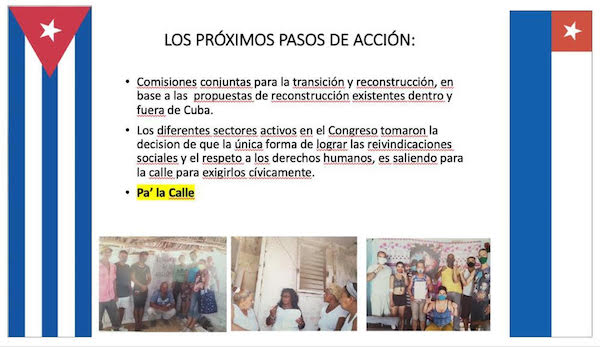 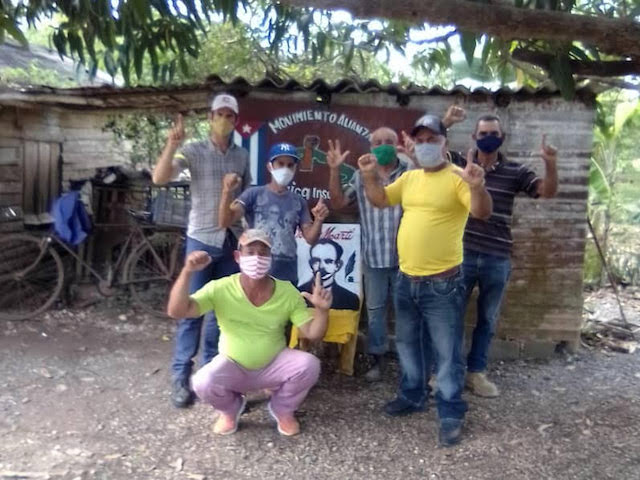 Congress of the Cuban Nation, May 2021. The Insurrectional Civic Alliance meeting in Havana. Courtesy the Cuban Democratic Directorate (Directorio).