Christian persecution in Cuba, a nation that was overwhelmingly Catholic before communism befell its population, has increased significantly in the past year due to the rising presence of Christian voices in the pro-democracy movement there, the Christian aid organization Open Doors found.

Open Doors published its annual World Watch List – a ranking of the worst places in the world to be a Christian – last week, documenting rising persecution as the stranglehold of jihadist movements tightens around places like Nigeria and Afghanistan and repressive leaders use the Chinese coronavirus pandemic as an excuse to limit the right of Christians to freely assembly. Open Doors reported that, as of the end of 2021, 360 million Christians live in places that discriminate heavily against them and that, in the past year, 5,898 Christians were killed as a result of their embrace of their faith.

Latin America, as one of the most heavily Christian-populated regions in the world, does not often see its nations rank highly on the World Watch List. Mexico – number 43 on the list this year – and Colombia, at number 30, have typically been the exceptions, appearing on the list due to violent campaigns against church groups at the hands of drug traffickers and other non-state actions. Cuba reemerged on the list of top 50 countries where Christians face the most persecution last year after two rounds of national protests – one on July 11 and one on November 15 – against communism attracted significant support from dissident clergy on the island. Many of the November protests were led by nuns and priests in major metropolitan centers.

“Mexico and Colombia, they make the list because of the cartels targeting Christians who stand up against them, against the drug trade, and they kill and hurt these pastors and priests,” David Curry, the CEO of Open Doors, explained to Breitbart News in an interview last week. “So this kind of violence is happening in those regions. What you have in Venezuela and particularly in Cuba is you have communist regimes who are trying to diminish the ability of the church to speak out.” 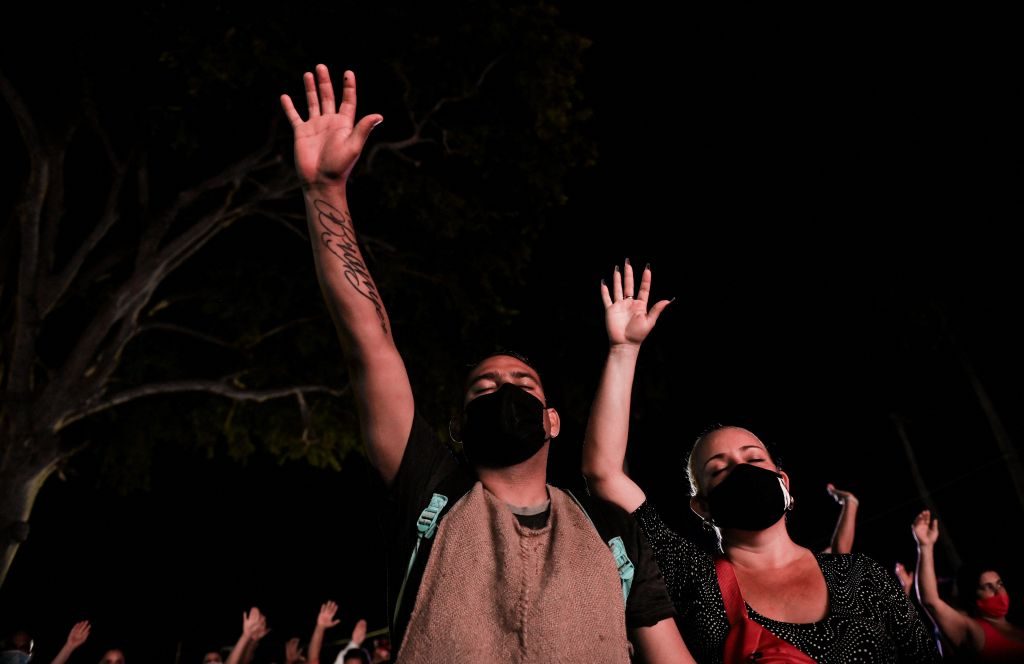 Pilgrims pray during the Saint Lazarus procession at El Rincon Church in Havana, on December 16, 2021. (YAMIL LAGE/AFP via Getty Images)

Venezuela did not make the top 50 on the World Watch List, but ranked just outside of it at number 65. Unlike Cuba, which is officially an atheist state, dictator Nicolás Maduro regularly proclaims his alleged Christianity and equates the Christian faith with socialism. Just as in Cuba, however, state-affiliated thugs have for years terrorized Christian leaders who support pro-democracy dissidents, in some occasions assaulting Catholic clergy mid-Mass.

“Cuba has jumped up now to number 37 on the WWL and while it’s not a huge country, they are beginning to get very serious about controlling the church,” Curry explained. “Christians for some years had some degree of freedom there and they dropped off our top 50, but now they’re back.”

Curry noted that Christian leaders in Cuba had found some “alignment” with the pro-democracy movement of the island. While true for decades – the Christian Liberation Movement (MCL) has been at the forefront of the push for freedom since the 1990s – the Cuban Communist Party’s courtship of the Vatican had for years added at least a veneer of tolerance towards Christians to the repressive Castro regime.

“What you see is that there’s some sense of alignment between pastors and priests around individual freedoms and things which would challenge the ideology of the communist regime of Cuba,” Curry explained. “They would like to see them sort of stay out of these discussions and let the government do what they want. I think all of these dictators have a similar belief around that.”

“So they’re beginning to say ‘Look, if you’re going to speak out against the cruelties of the government, we are going to crack down on you and make it difficult for you to get registered officially,'” Curry continued, “and those that are registered of course they have to toe the line. So that’s the game, a very dangerous game that’s being played in Cuba against the pastors and priests of that area.”

Thousands of Cubans in at least 16 cities took the streets peacefully on Sunday to demand an end to the 62-year-old communist regime. https://t.co/ZX9C1gOj9v

Protestant leaders have often borne the brunt of repression in Cuba due to the Vatican’s cooperation with Havana. In recent months, however, priests on the ground have begun to vocally dissent from the official line under Pope Francis of ignoring human rights abuses on the island – on at least one occasion, happening right before the pope’s eyes. Priests calling for an end to communism and respect for human dignity and universal values have become increasingly visible in Cuban society, at great personal risk. Christian leaders were prominent participants in the November protests on the island, the second wave of national assemblies against the regime after the historic July 11 movement. The clergy took the streets after the estimated arrests of thousands who participated in the July protests, including children, and the arrests of many simply in the vicinity of protests or those who use their mobile phones to record footage of the events.

“The continued rise is the result of highly restrictive measures against churches deemed to be opponents of the regime—especially non-registered Protestant churches,” Open Doors detailed in its World Watch List summary of Cuba. “The COVID-19 [Chinese coronavirus] crisis has been used as a pretext to hinder church and community activities, monitor church leaders, make arbitrary arrests, confiscate private property and impose extortion fees. Christian leaders from different denominations were among those arrested during anti-government demonstrations in July.”