SAN JOSE — A group of about 100 anti-Trump protesters tore up an American flag and chanted obscene slogans against the United States and presumptive Republican presidential nominee Donald Trump.

“America was never great! Fuck Donald Trump and his hate!” they chanted, interspersed with shouts of “Mexican power!” and obscene chants in Spanish.

One man held a sign declaring “This is Mexico! You are not welcome on Native/Mexican Soil” (original emphasis) and accusing Trump of white supremacy.

Later, as attendees left the venue, demonstrators attacked some of them, leaving one man bleeding.

Another woman was assaulted with eggs and bottles:

Protesters cornering Trump supporters as they leave. This woman taunted them. They cornered her & threw eggs at her pic.twitter.com/MiDGDBkKIo 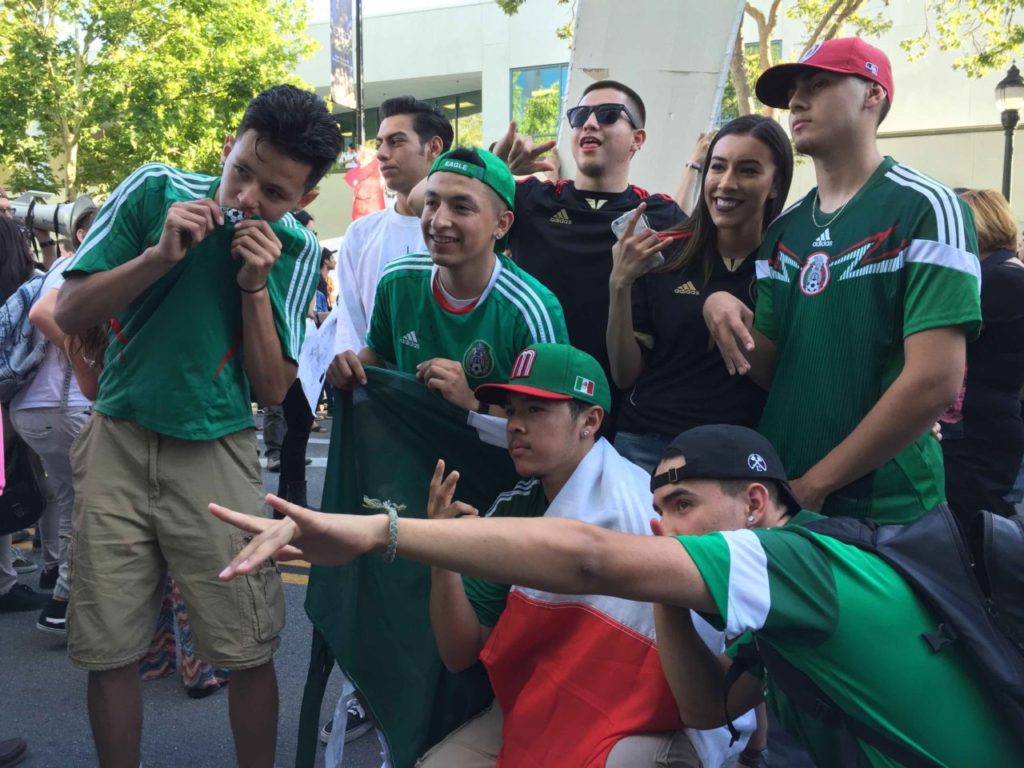 Breitbart News asked demonstrators why they were claiming America was not great — and whether they were afraid that doing so would cause more people to vote for Trump.

Most refused to answer. Some made threats. One woman said that the fact that Trump was the Republican nominee proved that America was not great.

Another demonstrator, holding a handmade “America was never great” sign and a communist T-shirt, said he was not interested in discussing his views.

A few Trump supporters waded into the crowd to debate. One young man observed the ruckus while wearing a “Make America Great Again” hat.

Another demonstrator arrived waving a “Feel the Bern” flag to show his support for Sen. Bernie Sanders (I-VT). 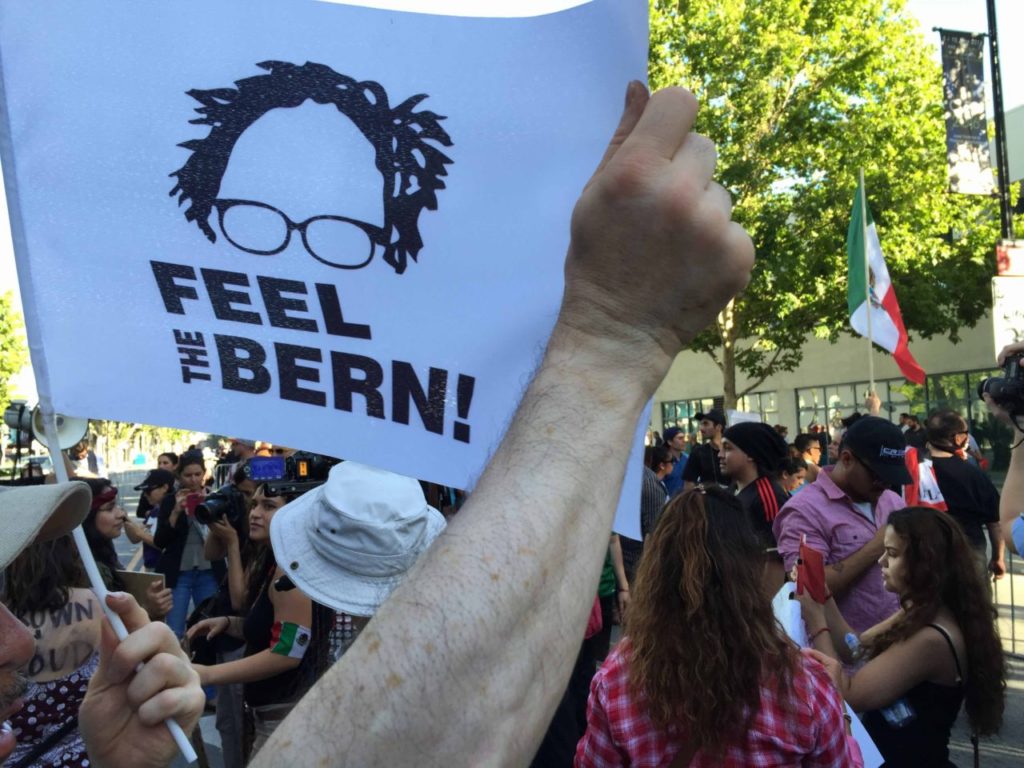 More sedate protesters, including a family of four, left before the rowdiness began. 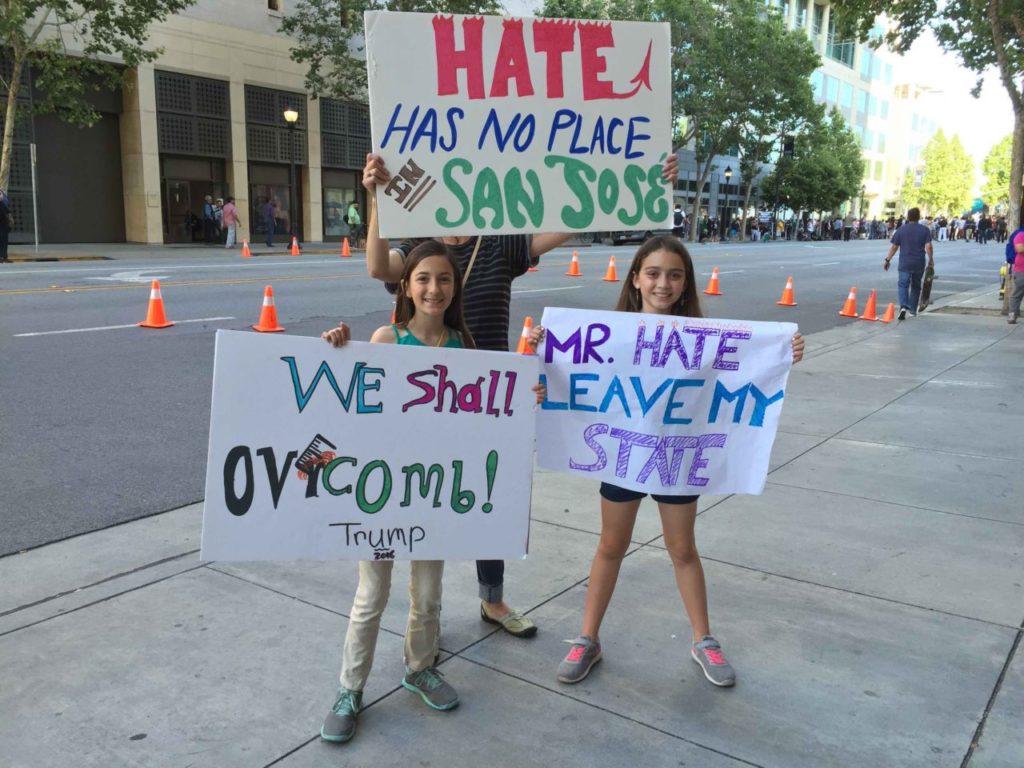 Some Trump supporters attempted to stage small counter-demonstrations, including a small Hindu group holding a sign reading “Indians for Trump.” One woman shouted at the anti-Trump protesters through a megaphone, and was asked by beleaguered police — who were standing between the two groups — to move a distance away.

Inside the San Jose Convention Center, several thousand Trump supporters cheered loudly in a cavernous tent with a deafening PA system as Trump took the stage.

“Is this more fun than the basketball game?” he asked, referring to Game 1 of the NBA Finals, featuring the local Golden State Warriors.

He noted that he expected victory in the June 7 California primary, but that it was important to maximize Republican turnout, to establish a “mandate.”

He added that his vision of making America great included Latinos — that it would be “inclusive.”

When a protester heckled him, Trump said: “Now, leave him alone. We’ve gotta be nice.”

Trump also took the opportunity to respond to his likely Democratic rival, who attacked him in a speech in San Diego this morning that was billed as a foreign policy address.

He reminded the audience that the Clintons had once “hated” Barack Obama, but were doing his bidding on the Iran deal and other topics because they feared prosecution.

Later, he repeated: “Hillary Clinton has to go to jail. She’s guilty.”

He complemented Sen. Sanders, “Crazy Bernie,” for having the “second-biggest” audiences at his rallies.

Trump added that he intended to put traditional Democratic states, such as California and New York, in play in November. “I think we can win California,” he said, to loud cheers.

Trump also made an appeal to party unity against Clinton.

Interspersed with somewhat new attacks — such as listing price increases in Obamacare premiums — Trump also repeated familiar themes, such as his pledge to build a border wall and make Mexico pay for it.

He closed with his signature line — and with the crowd chanting along: “Make America Great Again!”

Update: The clashes between pro- and anti-Trump people continued as attendees exited the rally, including assaults by anti-Trump activists against Trump supporters:

I called 911 but no one answered. Donald trump protest in San Jose, CA pic.twitter.com/LwaWyeYZfq

Police soon moved anti-Trump protesters a block away from the rally. 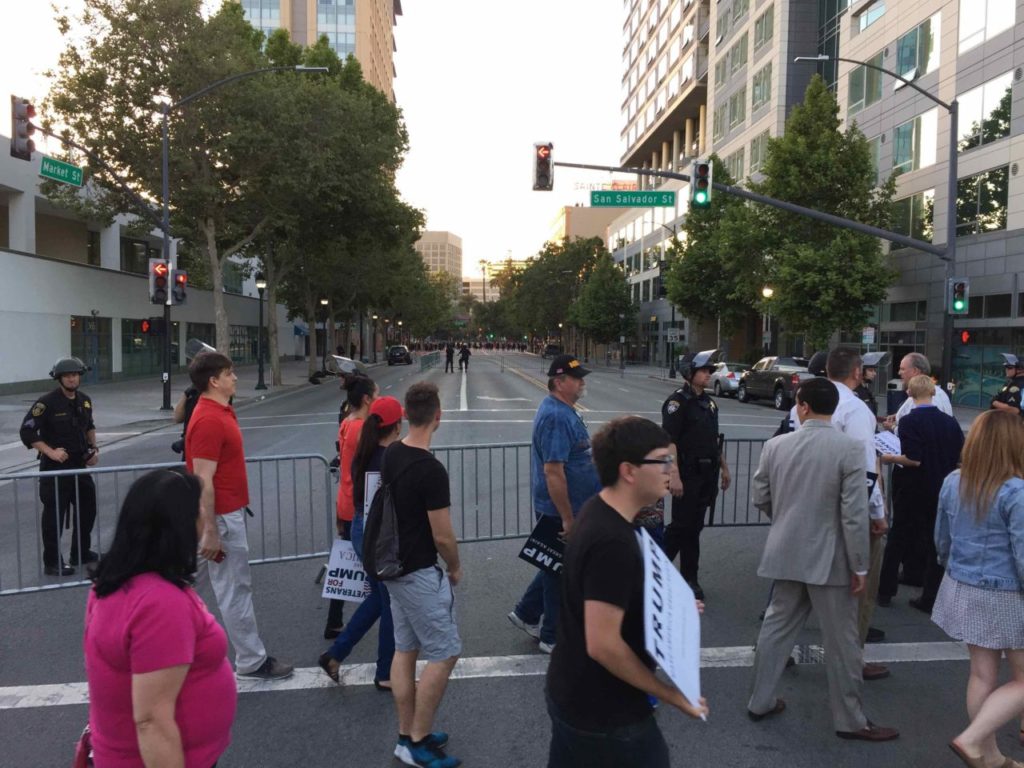 A wall of cops keeps the protest away in #SanJose. Sign says: “We are not paying 4 a fucken [sic] wall FDT” pic.twitter.com/Ad1Gyh1J4b

Other protesters milled about, including some from the Service Employees International Union (SEIU): 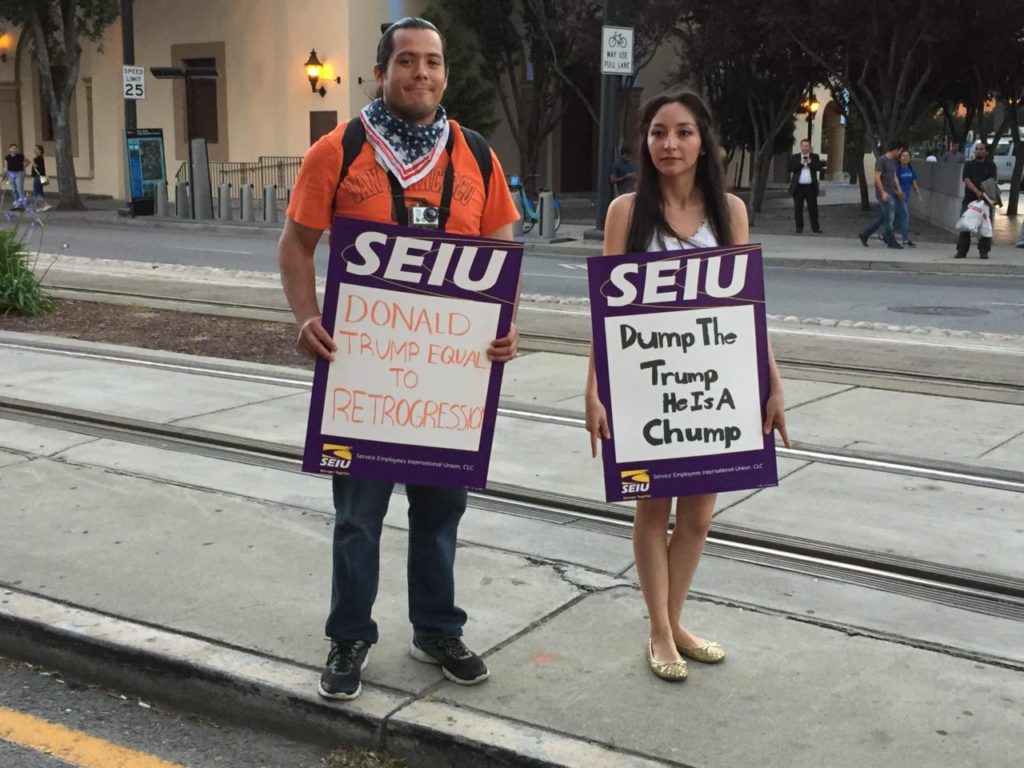 One man, shouting “Latinos for Trump!” confronted an anti-Trump protester, together with a group of women who had driven in from rural Tracy, California to attend the event.

Meanwhile, pickup trucks drove around and around, waving Mexican flags and blaring a viral anti-Trump rap song, “Fuck Donald Trump.” One man drove a pickup truck with an American flag mounted on the flatbed in response.