The New York Police Department (NYPD) is searching for two suspects believed to be involved in a pattern of armed robberies throughout the Bronx borough.

In one of the attacks, police say the two thieves stole jewelry worth up to $180,000 from one victim.

The first attack occurred on July 30 around 5:49 p.m. on 1395 Nelson Avenue when a 39-year-old man was approached by two suspects who displayed a firearm and demanded that he hand over cash.

The thieves then pushed the man to the ground while holding a firearm to his back and stole $800, two cellphones, jewelry, and AirPods. Police say the total amount stolen from the 39-year-old is worth approximately $12,710.

Three days later, on August 2, the thieves robbed a 25-year-old man sitting outside his home near Gun Hill Road and Lurting Avenue around 7:15 p.m.

When the two suspects approached the victim, they forcibly removed his necklace, bracelet, and wallet, containing roughly $540, along with his credit cards. Approximately $12,710 was stolen from the 25-year-old victim, police say.

In the third incident that occurred on August 13, police received a report at approximately 10:50 a.m. that a 37-year-old man was the victim of a robbery near 3327 Conner Street.

The victim was approached by two men who assaulted the man while displaying a firearm.

The suspects then stole approximately $180,000 worth of jewelry off the 37-year-old, including the victim’s gold necklace, watch, and rings.

No injuries were reported in all three robberies, and the suspects escaped on foot each time.

The male suspects identified by the NYPD are believed to be in their 20s. 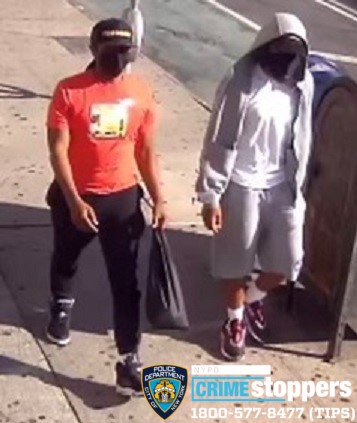 The two suspects police believe to be involved in the string of robberies. (NYPD Handout)

Police are asking anyone with information regarding the incidences to contact the NYPD’s Crime Stoppers Hotline at 1-800-577-TIPS (8477) or visit the Crime Stoppers website or their Twitter page.

The robberies are a part of a crime wave that is currently gripping Democrat-run New York City. Crime in the Bronx has increased by 30.9 percent since last year, with robberies rising by a whopping 43 percent, according to NYPD crime statistics.