The Community Security Trust (CST) said 577 incidents targeting Jews were reported to the charity from January to June. This was up from 473 in the same period last year, a trend the charity’s chief executive, David Delew, said was “worrying”.

The CST, which has compiled data on anti-Semitic hate incidents in the UK since 1984, said there was no “obvious single cause” for the high number.

The total of 557 incidents is the second-highest CST has ever recorded in the January-June period of any year. The highest total for the first half of any year came in 2009, when 629 anti-Semitic incidents were recorded due to anti-Semitic reactions to the conflict in Israel and Gaza in January 2009.

A further 364 reports were received by CST between January and June 2016, but were not deemed to be anti-Semitic and are not included in this total.

Mr. Delew said: “This rise in reported anti-Semitism comes at a time when division, intolerance and prejudice appear to be deepening within our society. Reversing this worrying trend requires real leadership from all political parties, and for the social media companies to take their share of the responsibility.” 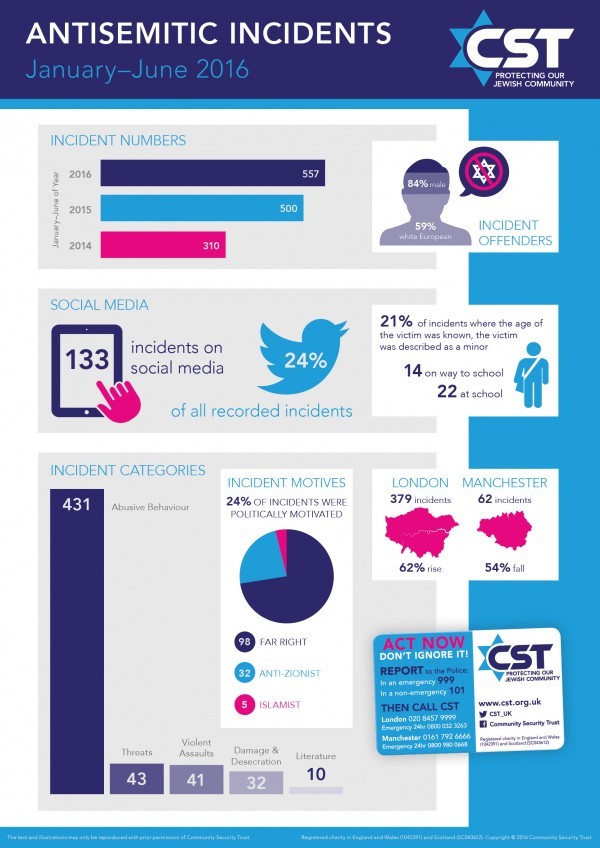 The statistics were released on the same day Breitbart Jerusalem revealed that anti-Semitic sentiments did occur within Oxford Union Labour Club (OULC) after a special report was leaked three months after the Labour Party took measures to suppress its publication.

The report, by Baroness Royall, investigated allegations made earlier this year that students within the OULC were engaging in anti-Semitic behaviour often times, but not exclusively, dressed up as anti-Zionism.

“There have been some incidents of anti-Semitic behaviour,” Baroness Royall confirmed in the report.

“Some Jewish members do not feel comfortable attending the [OULC] meetings, let alone participating,” she added.

Last month Breitbart Jerusalem reported that the UK Home Affairs Committee was carrying out a short inquiry into anti-Semitism, looking at whether prejudice against the Jewish community has increased and the particular dangers facing Jewish people arising from terrorism.

The video above gives an insight into some of the evidence taken as those called to appear spoke to MPs about hatred towards Jews in the UK.