An Iran commercial airliner with 135 passengers plus crew onboard overshot a runway as it landed Monday in the southwestern city of Bandar-e Mahshahr, continuing through the airport areas before coming to rest on a public street. State TV reported no casualties aboard the McDonnell Douglas MD-83 aircraft.

“Arriving at Mahshahr airport, the pilot landed the aircraft too late and this caused him to miss the runway,” the broadcaster quoted the head of Khuzestan province’s aviation authority as saying.

This “caused the aircraft to overshoot the runway and stop in a boulevard” next to the airport, Mohammadreza Rezaeia said.

After the hard landing passengers could be seen calmly disembarking from the Caspian Airlines plane, collecting their baggage and moving on. 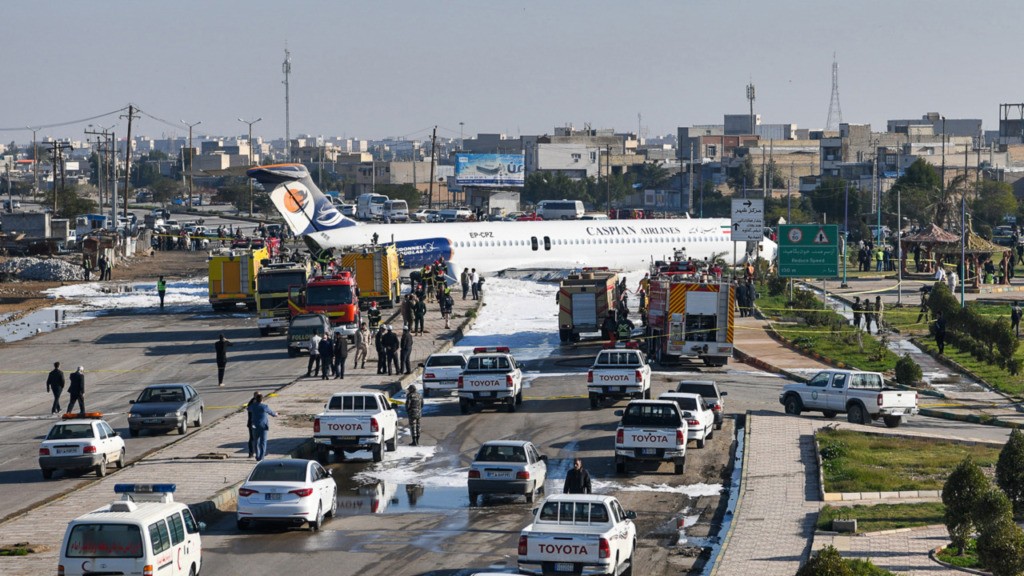 This picture taken on January 27, 2020 in Iran’s southwestern city of Bandar-e Mahshahr shows a Caspian Airlines McDonnell Douglas MD-83 aircraft which landed on a highway after it overshot the highway during its approach. (MOSTAFA GHOLAMNEZAD/ISNA/AFP via Getty Images)

Tragedy was only narrowly avoided, as images from the scene showed the plane had ground to a halt on a busy public street not far from a populated area.

A state TV reporter travelling on the plane told the broadcaster that the aircraft’s “back wheel had broken off, as we saw it was left on the runway” and said the plane had been moving with no wheels before it ground to a halt.

Dramatic footage of a passenger plane belonging to #Iran’s Caspian airline landing in the middle of the street in Mahshahr (same city that many were killed in Nov. protest) this happened in the last hour. Witness who got the footage didn’t know if there were any casualties. pic.twitter.com/oa6ghmT8bu

Witnesses filmed the dramatic event, capturing footage of the commercial aircraft on a highway as well as passengers disembarking in an orderly fashion after the accident.

Iran’s aviation authority said “the cause of the incident is being investigated.”

The MD-80 series was introduced into commercial service on October 10, 1980 by Swissair. It was lengthened and updated from the DC-9. This series can seat from 130 to 172 passengers depending on variant and seating configuration.