The Iranian news agency Mehr published an article Wednesday speculating that the deadly explosion that destroyed large parts of Beirut, Lebanon, the day before was the product of U.S. “sabotage.”

Mehr, the propaganda arm of Iran’s Islamic Ideology Dissemination Organization (IIDO), also gave space on its English-language website to a speculative column asserting, “Even if we accept that the Israelis and the United States were not involved in the Beirut bombing and put aside the possibility of any sabotage plan, they will certainly not ignore this opportunity to seek their political exploitation.”

A giant blast near Beirut’s port incinerated much of the city on Tuesday, leaving a large cloud of red, orange, and purple smoke and resulting in at least 100 deaths, according to the Lebanese Red Cross. Thousands were injured, though tallying a precise number has proved difficult for authorities as several of the city’s clinics and hospitals were damaged in the blast, resulting in bleeding civilians running through town seeking medical help anywhere. Seismologists reported that the blast emulated the power of a 3.5 magnitude earthquake and could be felt nearly 200 miles away.

Lebanese authorities announced that preliminary investigations suggested the explosion was the result of the detonation of a cache of nearly 3,000 tons of ammonium nitrate stored with few safety precautions at a warehouse near the port. The color of the smoke plumes appears to corroborate that nitrates were involved. Prime Minister Hassan Diab told reporters the material had been stored there for six years after being confiscated and that the government had no explanation for why no one had bothered to move highly dangerous material from a highly trafficked area.

Despite Lebanese officials denying that they had any evidence of terrorism or intentional detonation — and no evidence of an airstrike or any aerial activity triggering the blast — Mehr News proposed that U.S. warplanes may have bombed the harbor.

Mehr’s article, “Possibility of U.S. Sabotage in Beirut Explosion,” used unsourced images that appeared to be from a radar system showing various planes in flight near the harbor to make the cases that “unusual” American Navy patrols had occurred on the Lebanon-Syrian coastline at the time of the explosion. The low-resolution alleged radar images do not appear to have any timestamp on them, so it is impossible to tell when these planes were in the sky, and appear to have been taken from a Russian satellite system. The planes also never appear to fly over the explosion site. 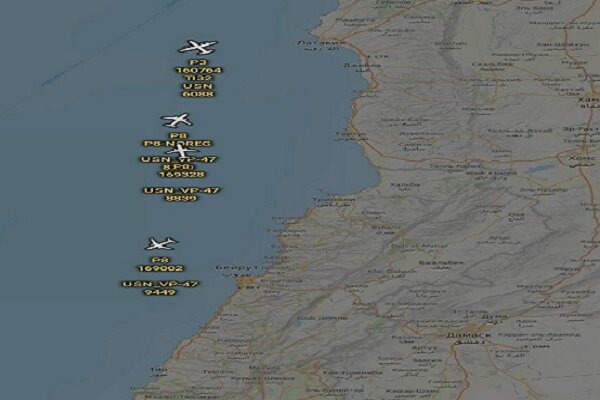 “Some radar images of unusual patrols and reconnaissance operations of four US Navy spy planes on the Lebanon-Syria coastline were released after the powerful explosion in the port of Beirut,” Mehr breathlessly relayed. “In this regard, some security experts said that there is possibility of US sabotage, adding that US forces may have planned a sabotage operation in recent days.”

“The importance of this point and the release of these radar images is that the American intelligence sources were aware of the existence of 50 tons of nitrate that had been stored in this port for about nine years,” the article claimed.

Diab said that the nitrate at the port had been there for six years, not nine, and that it totaled 2,750 tons, not 50 tons.

In another article, titled “Who benefiting from blast in Beirut? [sic],” Mehr suggested that the “odds are high about the possibility of a sabotage plan,” blaming the United States and Israel.

“It is in the interest of the opponents of the Resistance and could help them put maximum pressure on the Resistance Movement [pro-Iranian and Hezbollah elements], or at least to moderate or neutralize its measures against to [sic] the Zionist regime,” Mehr claimed.

Lebanese officials have vocally denied any evidence that the explosion was the result of deliberate measures, including speculation from President Donald Trump that the blast “looks like a terrible attack.”

“As far as the Lebanese government is concerned, we have no indication thus far that this was in any way caused by a deliberate attack or bombing of any kind,” Lebanese Ambassador to the United States Gabriel Issa said in a statement to Newsweek published by Mehr itself. “Initial indications are of a chemical storage massive explosion and investigations are ongoing to determine the cause.”

The Saudi news agency al-Arabiya quoted an unnamed “security source” claiming that the explosion “started by welding work being carried out on a hole in the warehouse,” but Lebanese officials have not gone on the record with any particular cause at press time.

The governor of Beirut, Marwan Abboud, estimated on Wednesday that the city suffered as much as $5 billion in damages, leaving hundreds of thousands homeless.