The number of Jews living in Europe today is just a tenth of what it was just 140 years ago, a new study reveals, as France leads a surge in emigration due to antisemitism.

The staggering drop is shown in a study compiled by Jewish demographers Prof Sergio Della Pergola and Dr Daniel Staetsky and is detailed in their newly published report for the London-based Institute for Jewish Policy Research (JPR).

The study, published on Wednesday, found 1.3 million people living in continental Europe, the United Kingdom and Turkey who describe themselves as Jewish – 60 percent lower than in 1970 when there were 3.2 million in the same area. 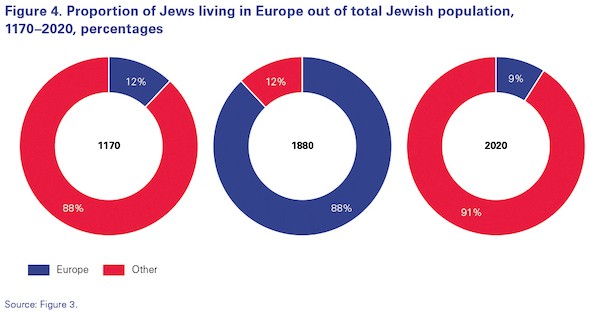 “The proportion of Jews residing in Europe [in 2020] is about the same as it was at the time of the first Jewish global population account conducted by Benjamin of Tudela, a Jewish medieval traveller, in 1170,” they say.

Titled Jews in Europe at the turn of the Millennium, their report charts population trends and shows how Europe first began losing out to America, one in ten immigrants to the U.S. in the first quarter of the 20th century having been Jewish.

What began at the end of the 19th century sped up significantly since the late 1960s, with Europe having lost 60 percent of its remaining Jewish population in the past 50 years alone, but in 1880 life could not have been more different, with 13 percent of world Jewry living in Western Europe and 75 percent in Eastern Europe.

France was specifically noted in the study as being responsible for much of the decline in Western Europe, although the problem neither starts nor ends there.

At the current rate of decline, France will be overtaken by Canada which according to the World Jewish Congress currently has around 391,000 Jews, said Sergio DellaPergola, one of the report’s authors.

The most well-documented reasons for the exodus of French Jews included antisemitism and economic opportunity, as Breitbart News previously reported.

“France today is a place where a history teacher can get beheaded on the street,” DellaPergola said, noting a suspected Islamist’s alleged actions last week. “Of course many Jews, including French ones, find Canada more hospitable.”

The decline follows the death of about six million European Jews in the Holocaust between 1941 and 1945 in Nazi Germany and German-occupied Europe.