ROME — The Chaldean Archbishop of Erbil, Bashar Warda, said Sunday evening that Pope Francis’s visit to Iraq and the message he offered were a great gift to the entire nation.

“We thank you for your courage in coming to this troubled land of ours, a land so filled with violence, this place of endless disputes, displacement, and suffering among the people and for having done so in this time of pandemic and global crisis,” Archbishop Warda told the pope following the closing Mass of his visit. “This makes Christ’s words — ‘Be not afraid’ — come alive for us.”

“We thank you for your prayers for the persecuted and marginalized, here in Iraq and throughout the world,” the archbishop said in Erbil’s Hariri stadium where the Mass was celebrated. 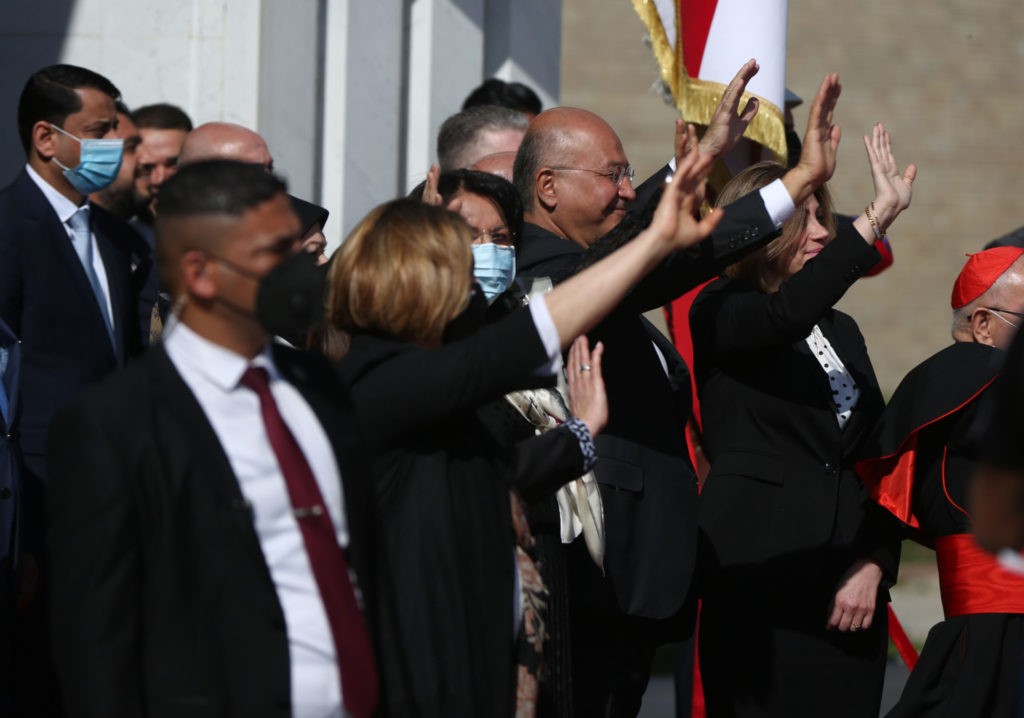 Iraqi president Barham Saleh and ranking Catholic clergymen wave to Pope Francis during his Farewell Ceremony at Baghdad International Airport on March 8, 2021. Pope Francis departed Iraq after his historic visit, the first papal visit to the country. In his first foreign trip since the start of the pandemic, Pope Francis visited Baghdad, Najaf, and the cities of Qaraqosh and Mosul, which were heavily destroyed by ISIS. He concluded his trip with a large mass in Erbil. (Taha Hussein Ali/Getty Images)

“We thank you for the message of peace that you have brought to Erbil and all of Iraq,” Warda concluded. “Your powerful message of brotherhood and forgiveness is now a gift for all the people of Iraq, which leaves us —everyone of us in this country — an ongoing responsibility to continuously bring your message to life in our daily lives, from now on.”

On Monday morning the pontiff boarded the papal plane to return to Italy at the conclusion of his event-packed, three-day visit.

In his speeches, the pope highlighted the deep suffering to which the Iraqi people have been subjected, while also urging them to overcome sectarian differences to rebuild the country in a spirit of brotherhood and solidarity.

In his farewell telegram to Iraqi President Barham Salih, the pope expressed his “deep gratitude to your Excellency and the beloved people of Iraq for the warm welcome and generous hospitality extended to me during my stay.”

“With fervent good wishes and prayers for the peace, unity and prosperity of the nation, I invoke upon all the copious blessings of the Most High God,” he concluded.