Turkish Foreign Minister Mevlut Cavusoglu is currently in Jerusalem meeting his Israeli counterpart, Yair Lapid, in the first visit in a decade and a half by Ankara’s top diplomat.

The two discussed reviving Israel-Turkish cooperation after years of frosty relations, which would include restoring ambassadors and signing a series of agreements.

In a humiliating scene that was filmed, Turkey expelled Israel’s envoy in 2018 in response to fatal clashes by Palestinian rioters on the Gaza-Israel border. Jerusalem responded by likewise dismissing Ankara’s envoy.

Çavuşoğlu on Wednesday said a Turkish-Israel rapprochement will also help advance a resolution to the Israeli-Palestinian conflict, in light of Ankara’s history of playing a diplomatic role in the peace process.

“We agreed to relaunch our Joint Economic Commission,” Lapid said in English-language remarks, “and to begin working on a new civil aviation agreement between our countries.” 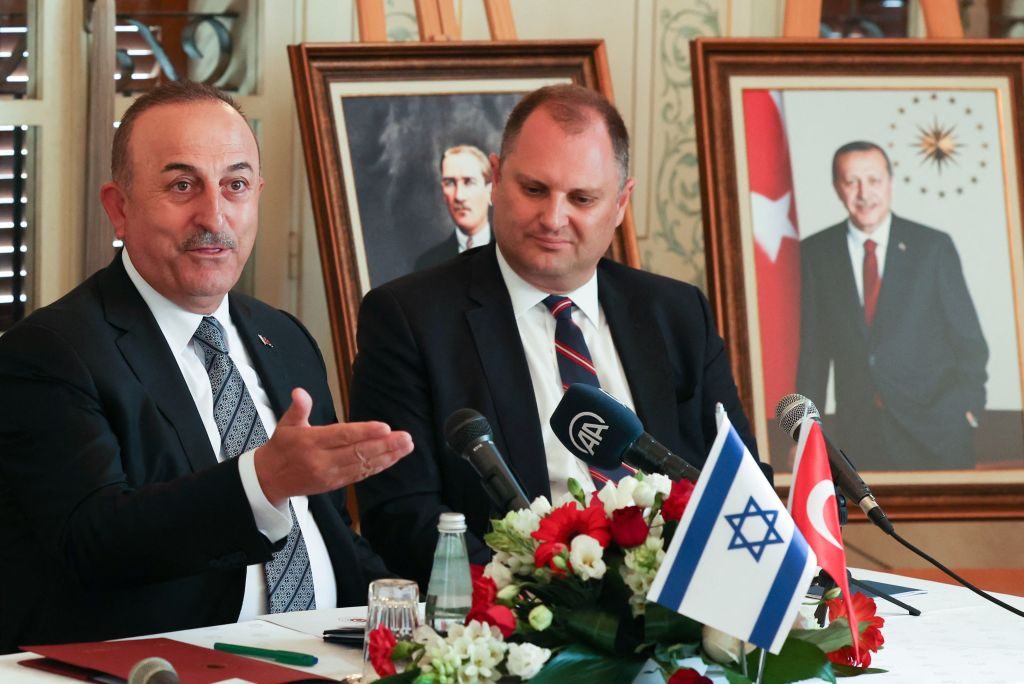 Turkish Foreign Minister Mevlut Cavusoglu (L) gives an opening statement before meeting with Israeli and Turkish businessmen, in the coastal city of Tel Aviv, on May 25, 2022. (JACK GUEZ/AFP via Getty Images)

Despite the measures discussed, restoring full diplomatic ties was not planned for the immediate future, with the countries preferring a gradual approach, the Times of Israel reported citing unnamed sources.

“The goal is to form and expand economic and civil cooperation between our countries,” said Lapid, “to create business-to-business and people-to-people ties, and to leverage our two countries’ comparative advantages regionally and globally.”

“We won’t pretend that our relationship has not seen its ups and downs,” Lapid acknowledged, “but we remember that Turkey was the first Muslim nation to recognize Israel, back in 1949. And we have always known how to return to dialogue and cooperation.”

Addressing the recent spate of terror attacks in Israel that have taken the lives of 19 people, Lapid said that “we expect our friends to cooperate with us in this battle.” 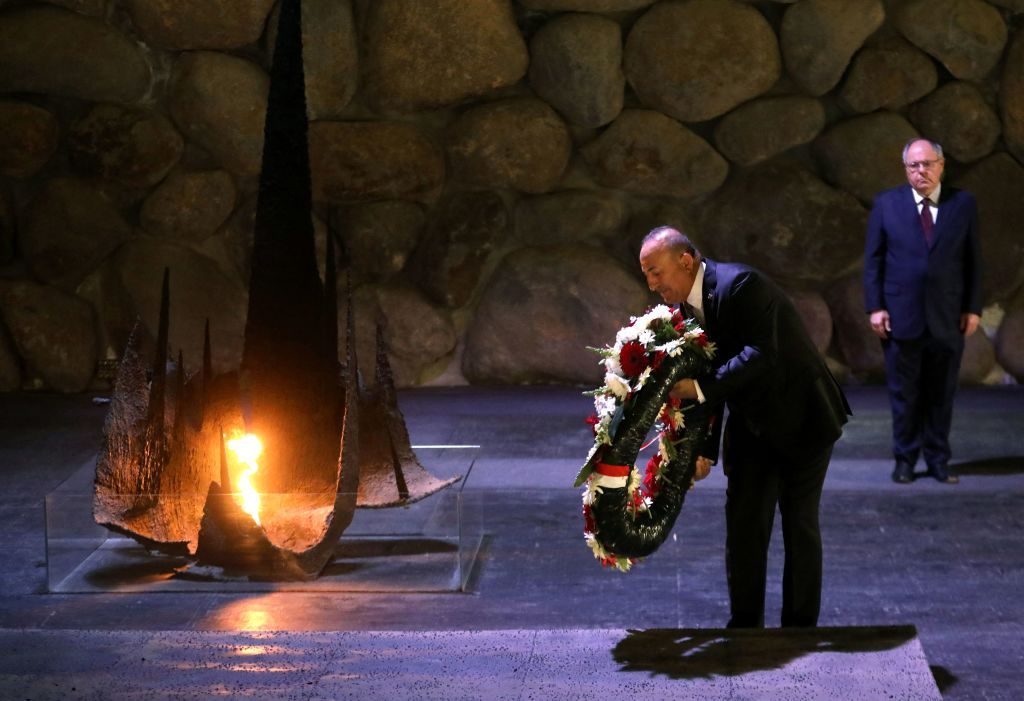 Turkish Foreign Minister Mevlut Cavusoglu (2nd-R) lays a wreath by the eternal flame, commemorating the six million Jews killed by the Nazis in the Holocaust, at the Hall of Remembrance at the Yad Vashem Centre in Jerusalem on May 25, 2022. (GIL COHEN-MAGEN/AFP via Getty)

“Today, we are initiating a new framework for improving our relations that not only we, but our children, will benefit from for years to come,” said Lapid.

Israel has also demanded Turkey work to prevent Hamas’ terror activities. Ankara has in the past expressed support of Hamas, the terror group that rules the Gaza Strip.

Çavuşoğlu expressed his appreciation for Lapid’s “candid and frank” remarks in closed-door meetings.

“We agreed that despite our differences, the continuation of a sustainable dialogue will be beneficial,” he said, “and this will be based on mutual respect to one another’s sensitivities.”

“I also, of course, shared our sensitivity regarding Jerusalem, and the sanctity of Haram al-Sharif,” he said, referring to the Temple Mount complex in Jerusalem by its Muslim name. 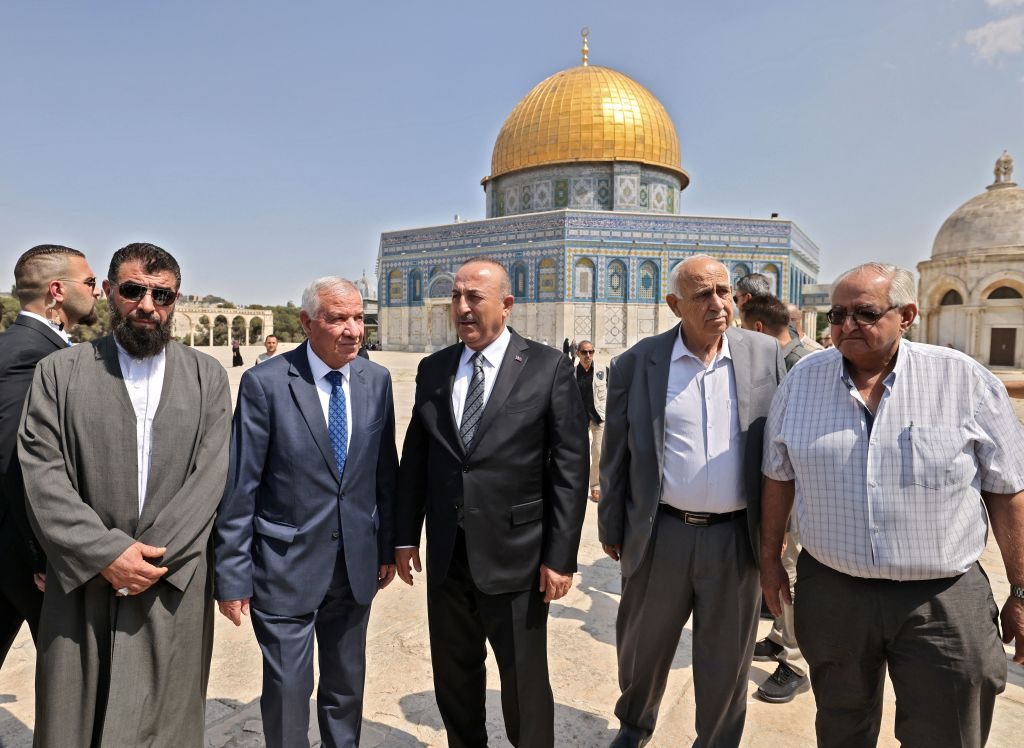 Turkish Foreign Minister Mevlut Cavusoglu (C) poses for a picture with general director of the Islamic Waqf (Endowment) Azzam al-Khatib (Center-L) and other officials in front of the Dome of the Rock mosque during his visit to the Aqsa compound in the Old City of Jerusalem, on May 25, 2022. (AHMAD GHARABLI/AFP via Getty Images)

“We believe that normalization of our ties will also have a positive impact on the peaceful resolution of the conflict,” he said.

According to the report, Turkey’s efforts to bridge ties with Israel are part of a bid to boost ties with European and Middle Eastern countries, in particular Israel’s new allies in the Arab world. The UAE and Saudi Arabia have regarded Turkey as a geopolitical and ideological adversary over the last decade, the Times of Israel said.