A U.S. Navy warship fired a warning flare early Tuesday to repel a speedboat from Iran’s Islamic Revolutionary Guard Corps (IRGC) during a tense encounter in the strategic Strait of Hormuz.

The exchange came as IRGC Commander Major General Hossein Salami boasted his country is out of reach to all enemies even as they “waged big psychological warfare targeting the people’s minds.”

The Cyclone-class patrol ship USS Sirocco and Spearhead-class expeditionary fast transport USNS Choctaw County found themselves in the close encounter with three Iranian speedboats while transiting the Strait of Hormuz to enter the Persian Gulf, the Navy said.

In a video released by the Navy’s Bahrain-based 5th Fleet, a high-speed IRGC Boghammar is seen turning head-on toward the Sirocco. 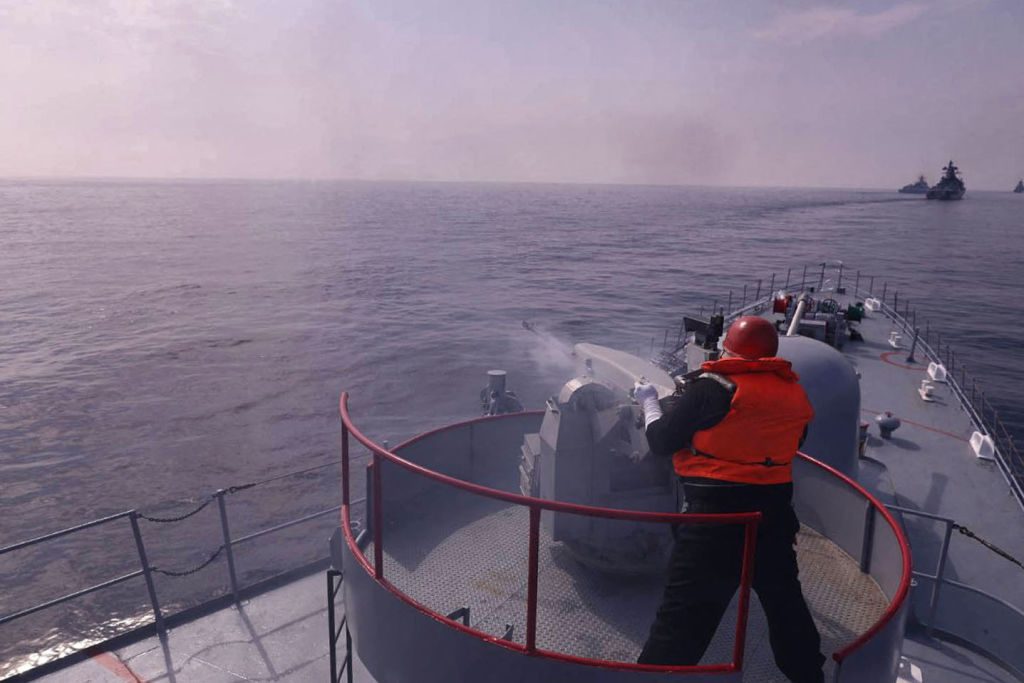 A handout from the Iranian Army official website on January, 21 2022 shows a sailor firing atop a warship during a joint military drill with Russia in the Indian ocean. (Iranian Army office/AFP via Getty)

The Sirocco repeatedly sounds its horn at the Boghammar, which turns away as it closes in. The flare shot can be heard, but not seen, as the Boghammar passes the Sirocco with the Iranian flag flying above it.

The full interaction among all vessels lasted one hour and ended when the IRGC craft departed the area. U.S. Navy ships continued their transit without further incident.

Iran did not immediately acknowledge the encounter in the strategic waterway — a fifth of all traded oil passes through the strait.

The Navy separately told AP this exchange marked the second so-called “unsafe and unprofessional” incident it had with Iran in recent months.

On March 4, three Guard ships had a tense encounter for over two hours with Navy and U.S. Coast Guard vessels as they traveled out of the Persian Gulf through the strait, the Navy said.

“I have instructed the United States Navy to shoot down and destroy any and all Iranian gunboats if they harass our ships at sea,” Trump wrote on Twitter. https://t.co/SLIYbUKKaA

In that incident, the Guard’s catamaran Shahid Nazeri came within 25 yards of the USCGC Robert Goldman.

Iran has previously warned the U.S. its vessels must be prepared to be attacked, with IRGC commander Hossein Salami making dire threats of retribution against warships that defy his speedboats, as Breitbart News reported.

The practise is known as “swarming” and depends upon multiple Iran speedboats attacking a single target in the hope of overwhelming the defenses.

Iran General Hossein Salami said he seeks revenge against the U.S. that "will be hard, firm, regrettable, decisive and complete." https://t.co/9xWXPX0JEW

Hours after Monday’s clash in the Strait of Hormuz, a boastful Salami declared Iran’s borders are secure against intruders.

Salami also noted “the enemy tries to turn the people against the government in Iran and has waged big psychological warfare targeting the people’s minds.”