Syria Foreign Minister Fayssal Mekdad’s address to the U.N. General Assembly on Monday was a funhouse-mirror view of the world from the vantage point of a brutal dictatorship.

In Mekdad’s long view, all of Syria’s problems have been caused by Israel and its hegemonic Western allies, Russia was merely trying to “defend itself” when it invaded Ukraine, and China was taking “necessary measures to defend its sovereignty” when it menaced Taiwan with provocative military exercises.

Mekdad’s thesis was that Syria’s grueling 11-year civil war and humanitarian disaster were entirely the fault of Western nations seeking to “impose their hegemony over other countries, to hoard the resources and wealth, and to implement their straitjacketed agenda by investing in terrorism, and by importing lethal weapons, and putting a stranglehold on economies.”

Mekdad blamed “terrorism, and the coercive measures imposed by Western states, and the plundering of the wealth of the Syrian people” for Syria’s massive human rights crisis, blaming the West for an estimated $107 billion in losses to the oil and gas industry, as though the Syrian dictatorship would have used every nickel of that lost revenue for humanitarian aid.

Mekdad claimed Syria, and other outlaw regimes, have faced “occupation and war” under the pretext of “spreading democracy and supporting human rights.”

In Syria, Mekdad accused the West and Israel of supporting “terrorists” masquerading as “moderates who are seeking freedom,” while cynically using those terrorist forces to undermine the supposedly noble and compassionate regime of dictator Bashar al-Assad.

“The war against Syria was ultimately an attempt by the West to maintain control over the world, but this war, which aimed at breaking the will of Syria and isolate it from the world, has failed,” he declared.

Much of Mekdad’s speech was an extended rant against Israel, which he accused of endless “human rights violations” and support for terrorism. In his view, Israel’s strikes against the Iran-backed terrorists Syria harbors were wanton attacks against innocent civilians.

“These Israeli practices are crimes and it is unacceptable for these crimes to go unanswered. Those responsible should be held accountable. We stand by the brotherly Palestinian people as they fight to free their occupied territories, and to establish their sovereign independent state throughout their territory, with Jerusalem as capital, but also to guarantee the right of Palestinian refugees to return home,” he said, laying out a string of non-starter demands.

“We also support the Palestinian effort to become a full-fledged member in the United Nations. This is something we have looked forward to for a long time. We hope that some members of the Security Council will not undermine these efforts,” he added, alluding to the likelihood that the U.S. and its allies would veto such a move. 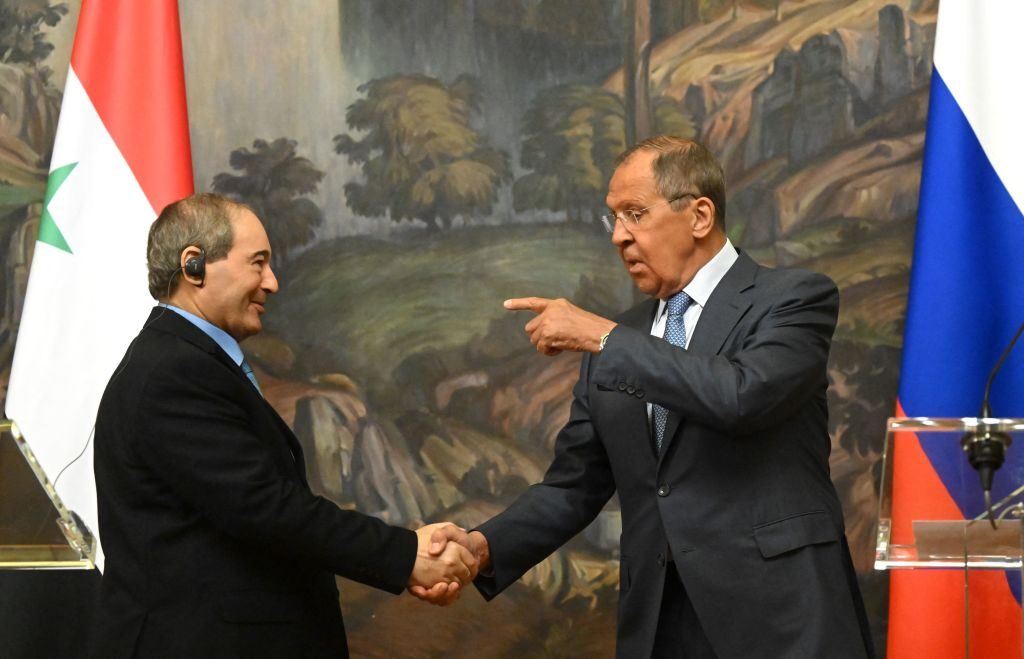 Mekdad accused Israel of committing “the worst systemic violations of human rights and international humanitarian law,” including alleged support for al-Qaeda and the Islamic State in Syria, and “plundering of natural resources in the Golan Heights, where Israel ahs buried nuclear waste and taken over land to set up wind farms.”

Israel has long dismissed accusations from Syria that it buried nuclear waste in the Golan Heights as “nonsense.” Israel did build wind farms in the Golan and is currently debating plans to expand them. Mekdad may have delivered the only speech during the U.N. General Assembly during which windmills were criticized.

“The Golan Heights is in the heart of every Syrian. Our right to recover the entire Golan territory up to the 1967 border is an undying right, guaranteed in accordance with international law and relevant U.N. resolutions,” Mekdad declared.

The Syrian foreign minister demanded that all “illegal military presence” in his country must “cease immediately.” He was primarily referring to Israel and the Golan Heights, although later he got around to briefly criticizing Turkey for invading Syrian territory to fight Kurdish militants.

Mekdad warned “separatist militias” in Syria must abandon all hope of receiving “aid and support” from foreign powers.

“Those who do not work with their homeland have no homeland,” he declared.

Mekdad strongly supported Russia, Iran, and China, fellow members of the rising axis of ugly dictatorships that are rejecting the post-World War II international consensus on human rights in favor of a China-led “multipolar world order” that recognizes the legitimacy of governments that bomb their own cities into oblivion and herd citizens into concentration camps, if such measures are deemed necessary to preserve order by the ruling party.

According to Mekdad, the Syrian dictatorship strongly supports Russia’s “special military operation” in Ukraine, to “defend itself and secure its national territory.”

We found the best bizarre meme propaganda for Bashar Assad. You're welcome. https://t.co/EaPRUP05zM by @mchastain81 pic.twitter.com/mo1VCtsUi5

Russian military intervention was the major reason Assad was able to remain on his throne in Damascus, so the regime’s support for Russia, after most U.N. member nations condemned the invasion of Ukraine, soared to delirious heights.

“We are convinced that the Russian Federation is defending not only itself, but justice and the rights of humanity, the right of everyone to reject unipolar hegemony,” he said.

Mekdad was only slightly less obsequious toward China, wholeheartedly supporting its “position with regard to foreign interference in its domestic affairs in Taiwan and Hong Kong.”

He said China should take all “necessary measures to defend its sovereignty, in particular with regard to the unprecedented escalation and provocation carried out by the United States of America,” by which he was presumably referring to House Speaker Nancy Pelosi visiting Taiwan in August.

Mekdad also demanded the United States submit to all of Iran’s extreme demands and restore the Barack Obama nuclear deal, which he incorrectly stated the U.S. withdrew from “illegally,” demanded “the end of American military maneuvers on the Korean peninsula,” condemned sanctions against Cuba and various other countries, and demanded “the lifting of all unilateral coercive measures imposed by the West everywhere in the world.”