Throughout the race, Masters has remained within striking distance of Kelly despite Tuesday’s outlier polling that showed the incumbent up 7 points (49-42 percent). A closer look at the poll revealed 7 percent of the electorate are undecided. The number of undecideds are an important metric in a state where the incumbent has not sealed a majority of support from the electorate.

Newt Gingrich, the former GOP House speaker, wrote an op-ed in Newsweek this month predicting Masters “will defeat” Kelly by a “surprising margin” because Kelly has not convinced a large portion of the undecided voters to vote for him.

“When an incumbent senator is only two points ahead of a challenger who just came out of a tough primary, it is clear the incumbent is vulnerable,” Gingrich analyzed in reference to a Trafalgar Group poll showing Masters just 1.2 percentage points behind Kelly.

“Furthermore, an incumbent who cannot get above 50% is even more vulnerable. James Carville once said a well-known incumbent gets whatever their final poll number is—they don’t get any of the undecideds,” Gingrich continued. “If that is true, Kelly will likely lose 53% to 47%.”

To make matters worse for Kelly, the state of Arizona has an outsized number of independent voters who are not completely sold on Kelly’s alliance with the Biden administration’s open southern border. August was the fifth month in a row in which migrant apprehensions exceeded 180,000 migrants. Nearly 2 million illegal migrants crossed the southern border this fiscal year.

Independent voters, who amount to 1.4 million in Arizona, “have helped push the state from reliably red to tossup, and now make up about a third of the voting population,” the New York Times reported Wednesday.

Independents are breaking for Kelly over Masters by nine percentage points (46-37 percent), according to a recent Emerson College poll. But Kelly’s overall slim lead against Masters shows that Kelly remains vulnerable with 41 more days until election day. 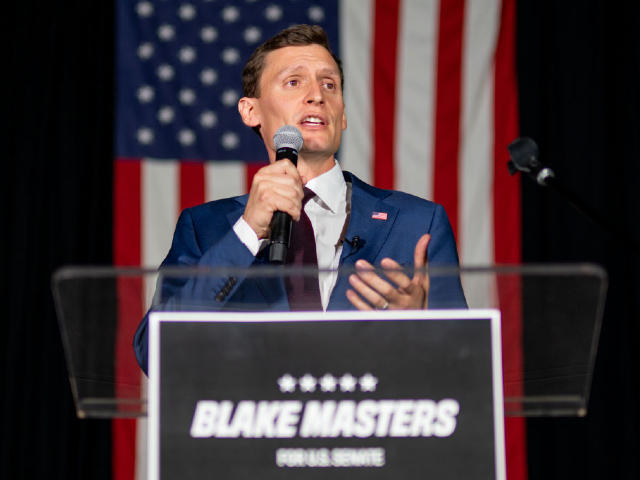 In the world of politics, six weeks is a long time before an election. It appears Kelly is relying on the Supreme Court’s decision on Roe v. Wade to remain in the minds of many voters to offset the Kelly’s open border invasion policies.

Kelly is a co-sponsor of a an unpopular pro-abortion bill that would force every state to adopt a new federal abortion standard that would permit abortions without limits.

According to recent polling on the issue, the bill is not very popular with independents.

Fifty-three percent of Arizona voters oppose legislation permitting abortion until birth. Fifty-six percent of independents and 27 percent of Democrats revealed Kelly is less likely to win their vote after learning of Kelly’s radical record on abortion.

On Tuesday, Breitbart News reported Kelly will be exposed by the Women Speak Out PAC for his pro-abortion position with a $1 million ad blitz in Phoenix from September 25 to October 5.