After centuries of warfare in which secrecy and espionage often made the difference between winning and losing, we should be grateful that our current enemy has published–and then repeatedly called attention to–his battle plan.

The only problem? Our senior leadership refuses to read it. 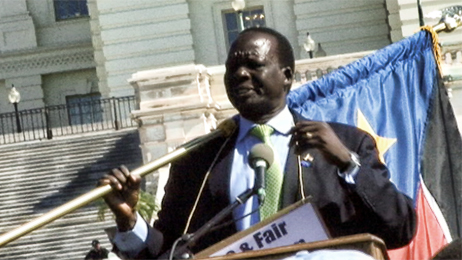 That’s the primary takeaway from the briefing Big Peace attended by the Strategic Engagement Group (SEG). Whether it is through violence or deceit and subversion, Islamic law provides both the strategic blueprint and the justification for war against the West. And the West’s refusal to read the Quranic literature and accept the religious motivation behind Islamic terrorism, instead opting for a politically correct view that they cannot accurately interpret Islam, has resulted in a “complete epistemic collapse,” according to SEG’s vice president of strategic communication initiatives, Stephen Coughlin.

The enemy “is who he says he is,” Coughlin said, adding that everyone–including Islamic terrorists themselves–refer to such fighters as jihadis. “There’s no question that the enemy we are fighting considers himself a jihadi.”

And jihad, as explained by 14th century Islamic scholar Ahmad ibn Naqib al-Misri, “means to wage war against non-Muslims, and is etymologically derived from the word mujahada, signifying warfare to establish the religion.”

He asked if someone could be both politically correct and threat-focused? The answer seems to be a clear no.

As explained by Mohammad Hashim Kamali in Principles of Islamic Jurisprudence:

“Sovereignty in Islam is the prerogative of Almighty Allah alone… . It is neither the will of the ruler nor of any assembly of men, nor even the community as a whole, that determines the values and the laws which uphold those values.”

Such principles make Islamic law incompatible with democracy, Coughlin explained, or even recognizing the sovereign power of the law of the land, the way Christian law and Jewish halakha do.

When Coughlin speaks about Islam, he often puts the word moderate in quotes. That’s because even those considered moderate, such as Imam Faisal Abdul Rauf–spiritual leader of the “Ground Zero” mosque–believe in the primacy of shariah law. Rauf himself wrote that since “Shariah is understood as a law with God at its center, it is not possible in principle to limit the Shariah to some aspects of human life and leave out others.”

Coughlin noted that some of our Arab allies, such as Saudi Arabia and Egypt, have constitutions based on Islamic law. And pointing to The Quranic Concept of War, by Pakistani Gen. S. K. Malik, Coughlin said the enemy’s threat doctrine is based on Islamic law, and there is no way to defeat an enemy without explicitly understanding its threat doctrine.

The other element to the threat doctrine is the Quranic concept of taqiya, or misleading the enemy. Coughlin showed a letter signed by about 40 Muslim leaders disapproving of an Islamic “day of violence” in response to comments made by the pope criticizing religious violence. The letter was intended for Western ears, and its audience happily accepted it, despite the fact that when Islamic leaders speak to Muslim audiences, they encourage the Quranic concept of war.

“That’s the gold standard,” Coughlin said, holding up the Pakistani text on jihad. Then he held up the open letter to the West: “This is the you’re-going-to-lose-the-war standard.”

The reason Muslim leaders can denounce “terrorism” while still supporting it, Coughlin explained, is that terrorism is not defined in Muslim parlance the same way it is in the Western lexicon. Again quoting al-Misri: “The following are not subject to retaliation: … (2) a Muslim for killing a non-Muslim.” Leaders of the Muslim world will condemn “terrorism”–meaning the killing of a Muslim, or in some cases a tourist, which is why they often say they condemn “terrorism and the killing of innocents.”

Coughlin then introduced the Islamic concept of abrogation (progressive revelation), which holds that the latest version of Islamic law supersedes all others. He quoted from Islamic Jurisprudence, by Imran Ahsan Khan Nyazee:

“The law was laid down in the period of the Prophet (peace be unto him) gradually and in stages. The aim was to bring a society steeped in immorality to observe the highest standards of morality. This could not be done abruptly. It was done in stages, and doing so necessitated repeal and abrogation of certain laws.”

When put in order, the Medinan period is the latest period in which the Quran is ordered. And the last part of the Medinan Quran that talks about jihad (making it the final word on the subject) says: “Fight those who believe not in Allah nor the Last Day, nor hold that forbidden which hath been forbidden by Allah and His Apostle, nor acknowledge the religion of truth, even if they are of the people of the Book, until they pay the jizya with willing submission, and feel themselves subdued.”

John Guandolo, vice president of strategic planning and execution for SEG, delved more into the concept of taqiya, pointing out the infiltration into major sectors of local and federal governments by the umbrella Islamist network, the Muslim Brotherhood.

“Deception is not a tactic for these guys, it’s the whole game,” Guandolo said.

He went on to demonstrate this by showing a photo of the Brotherhood’s Sheikh Kifah Mustapha among the graduates of a recent FBI Citizens’ Academy, which takes its participants inside the FBI’s investigation and community relations processes. He showed a video of Anwar al-Awlaki, an American-born top terrorist recruiter for al-Qaeda now based in Yemen, leading a prayer service on Capitol Hill. Guandolo pointed out that Abdurahman Alamoudi–who in 2004 pled guilty to illegal financial transactions with the Libyan government and to participating in a plot to assassinate Saudi Crown Prince Abdullah–was in charge of selecting Muslim chaplains for the U.S. military. These are just a few of many examples, he said.

“They’re actually inside our decision making group,” Guandolo said, adding that decades of Soviet subversion in the U.S. laid the groundwork for radical Islam’s taqiya campaign.

But far from accusing lawmakers of knowingly collaborating with the enemy, Guandolo made clear that he believes political leaders don’t know the backgrounds of many of the people they meet with, often relying on “moderate” Muslim staffers to make the introductions. This makes counterterrorism efforts on this front virtually nonexistent.

“Not only are we not countering it, we don’t know that it’s going on,” Guandolo said.

When the media report on a “lone wolf” attack, Guandolo said, they attempt to paint each Islamic terrorist as a sort of rebellious one-man breakaway movement. But what do all these lone wolves have in common? They all cite Islamic law as the justification and inspiration of their acts.

When law enforcement or government officials classify jihad as some kind of “internal yoga,” Guandolo said, groups like the Council on American-Islamic Relations (CAIR) sit back, smile, shake their heads and say “still stupid. Still haven’t cracked a book.”

CAIR was founded in 1994 ostensibly to defend American Muslims from what it sees as discrimination. But the organization was born after two of its co-founders, Omar Ahmad and Nihad Awad, attended a meeting in 1993 called by members of the Hamas terror outfit. The FBI investigation of the meeting showed it to be a strategy session on how to undermine the Mideast peace process and support jihadist activity against the West.

Even more troubling, Guandolo said, is the extent to which the Muslim Brotherhood–global Islamist movement and father of Hamas–controls the Muslim community’s access to American politicians. And there need be no guessing as to the Brotherhood’s intentions; any visitor to the organization’s Web site can find, in English, “the principles of the Muslim Brotherhood”:

“1-The introduction of the Islamic Shari’ah as the basis controlling the affairs of state and society.

2-Work to achieve unification among the Islamic countries and states, mainly among the Arab states, and liberating them from foreign imperialism.”

Put simply, they intend to establish Islamic law and re-establish the caliphate. In 2004, the FBI discovered a Brotherhood memorandum that laid out the “strategic goals” of the organization. The most infamous paragraph is the following:

“The process of settlement is a ‘Civilization-Jihadist Process’ with all the word means. The Ikhwan (Brotherhood) must understand that their work in America is a kind of grand Jihad in eliminating and destroying the Western civilization from within and ‘sabotaging’ its miserable house by their hands and the hands of the believers so that it is eliminated and God’s religion is made victorious over all other religions. Without this level of understanding, we are not up to this challenge and have not prepared ourselves for Jihad yet.”

When Western leaders put political correctness ahead of security, Guandolo said, the Brotherhood has succeeded in furthering its “civilization-jihadist” goals “by their hands.” This is difficult for political leaders to accept, because it would acknowledge just how far this type of jihad has advanced. But that understanding, Guandolo said, is crucial to establishing a strategy to counter it:

“There’s a doctrine here that is airtight that the enemy says he’s fighting for, and we have yet to look at it. We know that because of the level of penetration that this amounts to an insurgency.”