The wisdom of intervening in Libya’s internal civil war is for others to judge, but what is obvious is that it is but another incident in a long, long list in which America has intervened on behalf of its European allies, who, in recent years, have neglected their military and stuck us with the bill.

The first such incident in recent memory was Kosovo. In that conflict, Americans were assured that there was genocide of epic proportions – only to find out later, in 2001, that there was no such genocide ongoing. The gratitude that Americans got for helping the Muslims of Kosovo avoid extermination at the hands of the Serbian military can be seen in the planned suicide attack “to kill as many soldiers as possible” by Muslims of Kosovo on Fort Dix, NJ in May 2007. If at first you don’t succeed, your countrymen will try harder. Hence the shooting of American soldiers by a Muslim from Kosovo in March.

No matter. America was ever willing to help its European allies, though, and so we sacrificed blood and treasure to fight a war we had no business fighting. Sound familiar? We’re about to do it again.

The Europeans projected on us, accusing of us fighting a war for oil in Iraq. They are curiously silent about similar such charges, because, it turns out, America’s fighting Europe’s own actual War for Oil.

Just have a look at the figures for yourself, courtesy of the International Energy Agency and note which countries have seen their oil imports rise and which haven’t. 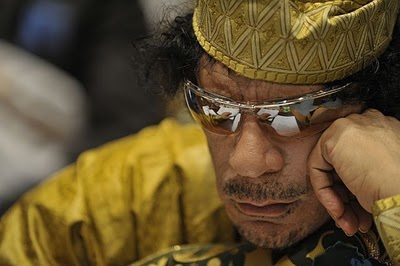 (In case you were wondering, part of the reason Britain saw her imports rise was that whole compassionate release of the Lockerie bomber – a release, which, by the way, the Obama administration fully supported, despite their public protestations to the country.)

Compare that to France’s imports from Libya which have nearly doubled from 2007 (105 mb/d versus 205 mb/d in 2010). Now do you get why French president Nicolas Sarkozy is suddenly sounding hawkish on Libya? He’s not “taking the reins on Libya,” as the Los Angeles Times headline claimed — but being choked by them.

There’s more. For years, there was an alliance between Moammar Qaddafi and the Europeans to keep the black Africans from descending upon Europe’s overly generous welfare state, a welfare state they can only afford, by the way, because we foot the bill on their defenses.

John Derbyshire of Radio Derb noted that that Faustian arrangement went something like this.

Europe to North Africa: “Please, oh pur-lease, don’t let all those desperate dark people come and overwhelm our nice tidy little continent.” North Africa to Europe: “Hey, no prob! We’ll give you a nice deal on this: twenty billion a year, full diplomatic recognition … oh, and send us a regular supply of your nubile young women.”

That arrangement has now come to an end so the Europeans have every hope that some kind of new status quo can be established – and fast.

What does this have to do with America? Absolutely nothing. But don’t expect our government – or our media – to understand that. To defenders of our military adventurism that we have no national security or strategic interest is the very reason that we have to be involved.