This morning’s key headlines from GenerationalDynamics.com.

At a time when a Chinese envoy is in Damascus so provide support for the Bashar al-Assad regime, two ships from Iran’s Navy docked at the Syrian port of Tartus to provide maritime training to Syria’s naval forces. This is only the second time since the 1979 Islamic Revolution that an Iranian fleet has passed through the Suez, the first time being last year in February. The fleet consists of two warships, a destroyer and a supply ship. Press TV (Tehran)

“A good number” of unmanned U.S. military and intelligence drones are operating in the skies over Syria, monitoring the Syrian military’s attacks against opposition forces and innocent civilians. However, U.S. officials say that this this surveillance is not in preparation for U.S. military intervention. Rather, it’s to collect visual evidence and intercepts of Syrian government and military communications in an effort to make the case for an “international response.” According to an analyst on al-Jazeera on Saturday who seemed to know what he was talking about, things are poised to get much worse in Syria, because al-Assad apparently plans now to turn on Idlib the way he’s turned on Homs and Deraa. Since Idlib is near the border with Turkey, there will be tens of thousands of refugees pouring into Turkey. This may force Turkey to react by setting up a buffer zone or corridor on Syrian soil, and it’s possible that the U.S. drones are collecting intelligence in preparation for that action. MSNBC 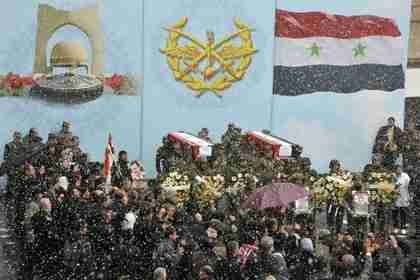 Security forces from the regime of Syria’s president Bashar al-Assad used live fire on people walking in a funeral procession in the upscale Mezzah neighborhood of Damascus on Saturday. The funeral was for the dead who were killed by regime forces during Friday’s anti-Assad protests in Damascus. In the past, Syrian officials could claim that the protesters were scattered in various rural areas around the country, and weren’t a serious threat to the regime. But now there are large protests in Damascus, as well as in the second largest city, Aleppo, indicating that the uprising is has moved from rural to urban regions, close to al-Assad’s doorstep. The National (UAE)

Another vociferous supporter of Syria’s Bashar al-Assad regime is Venezuela’s president Hugo Chávez, who is sending a tanker with diesel fuel worth as much as $50 million. Al-Assad’s military will be able to use the fuel to continue its extermination of his own people. Zaman (Istanbul)

A report shows that nearly 30% of families surveyed in India have been forced to eat less food because food prices were 24% higher in 2011 than in 2010. In addition, in many homes children were forced to skip school to supplement family incomes while there were others who could not even “afford a diet containing the bare essentials of milk, eggs and vegetables.” Besides India, the study showed similar findings in Bangladesh, Nepal, Peru, Nigeria and Pakistan. As the above graph shows, the price of food has been trending upward since 2002. There has been a lot of volatility since 2008, with sharp spikes upward and downward, but the the overall since 2002 there has been an overall exponential growth trend of the world price of food. This trend is expected to continue until reset by world war. India Today and FAO