Saudi Arabia is running out of swordsmen to behead people 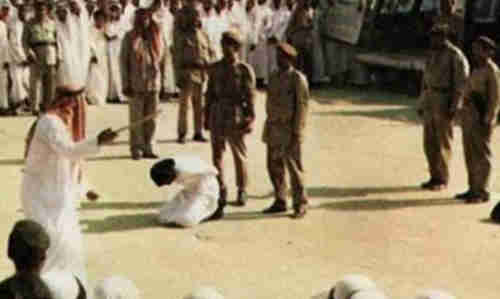 Saudi Arabia is considering the abolishment of beheading for capitalpunishment in favor of firing squads, because there are shortages ofgovernment swordsmen to do the job. Rape, murder, apostasy, armedrobbery and drug trafficking are all punishable by death under Saudilaw. About 70 people were put to death by beheading in 2012. Therehas been worldwide outrage of Saudi Arabia’s beheading program, and itreached a peak last week after the beheading of a girl who, in 2005,at age 17, came to Saudi Arabia as a maid, and plotted and killed aninfant by suffocating him to death one week later. Al-Ahram (Cairo)

Two terrorists disguised as cricket players got out of a car, walkedacross a playground for a school adjacent to a paramilitary camp inthe India-governed side of Kashmir, shot dead a sentry, and firedgrenades indiscriminately, killing 5 soldiers and wounding threecivilians. The two terrorists were killed by Indian soldiers.Kashmir was the epicenter of the massive genocidal war that followedPartition, the partitioning of the Indian subcontinent into India andPakistan in 1947. Pakistan and India each control a portion ofKashmir, with the two sides separated by a border called the “Line ofControl” (LoC). Kashmir has been the site of repeated clashes betweenPakistan and India since 1947, and may well be the epicenter of thenext massive genocidal war between the two countries. India blamedthe Pakistan terrorist group Lashkar-e-Toiba (LeT) for Wednesday’sattack, but Pakistan rejected the charge that any Pakistanis wereinvolved in the attack. Hizbul Mujahideen, an Indian Islamistterrorist group, has claimed responsibility for the attack. Times of India and Pakistan Observer

The generational change in China’s leadership, as 59-year-old XiJinping takes over as president from 70-year-old Hu Jintao onThursday, marks a historic change in attitudes at the top. HuJintao, it seemed to me, fit the profile of a survivor of the lastcrisis war (like our Silent Generation) by seeking to mediatedisputes. Having grown up during Mao’s bloody Communist Revolution,he understands how dangerous it is to provoke another war, and doesn’twant to see anything like that happen again.

Xi Jinping never suffered the horrors of Mao’s war, and doesn’tunderstand the dangers. He’s launched a series of “The China Dream”speeches, in which he calls for China to shed its past as a secondaryplayer, and become the world’s top military and economic power.He’s visiting Chinese military bases and telling the troopsto be ready for war at any time. He’s personally taking chargeof policy in the East and South China Seas, and has vowed thatChina will take every step necessary to gain control of theseregions, including areas that have been owned by other countriesfor centuries.

So now we have a President in Beijing who says that there’s no problemwith preparing rapidly for war against the United States, and we havea President in Washington who whose stated intention on Wednesday isto have the government spend as many trillions of dollars as possible.These two world leaders are racing to see who can be the first tocreate a catastrophe. It’ll be interesting to see who wins, I guess.WSJ and China Daily