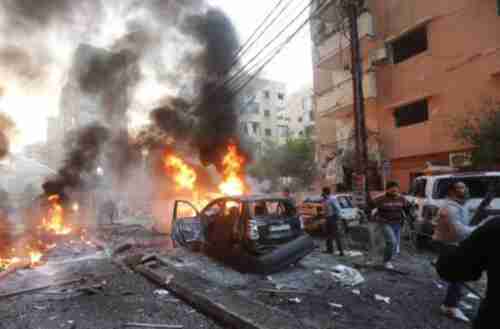 The sectarian war in Syria has been spilling over into Lebanon almostsince it began in 2011, mostly in the form of sectarian gunfights innorthern Lebanon in Tripoli, on the border with Syria. But theviolence in Lebanon has been spreading and worsening since April 30,when Hezbollah chief Sayyed Hassan Nasrallah committed his Shiamilitia to fighting alongside the army of Syria’s Shia/Alawitepresident Bashar al-Assad against the Sunni opposition. And in thelast couple of months, the violence in Lebanon has crossed several redlines, particularly striking at the heart of Beirut, in the mostwell-defended sections of the city. Each side is determined to provethat it can strike at the other side, and that attempts at protectionare futile. AFP

The war in Syria is also spilling over into Iraq, where sectarianviolence has been growing since the withdrawal of American troops inDecember, 2011. During the last week, al-Qaeda linked forces havebeen taking control of parts of the cities of Fallujah and Ramadi inAnbar province, near the border with Syria. Al-Qaeda in Iraq wasdefeated in 2007 by President George Bush’s “surge” strategy (See“Iraqi Sunnis are turning against al-Qaeda in Iraq” from 2007.) Shia Prime Minister Nourial-Maliki has adopted hostile policies towards the Sunni population,alienating them, perhaps getting even for the decades when Sunnileader Saddam Hussein treated the Shia population extremely harshly.

The old Al-Qaeda in Iraq has become the Islamic State of Iraq andSyria (ISIS), also called the Islamic State of Iraq and the Levant(ISIL). During the last few months, ISIS has become a magnet forSunni jihadists around the world. ISIS’s victories in Iraq are a signof the growing strength of ISIS in the region, as the entire Mideastbecomes inflamed along sectarian Shia/Sunni lines. Al-Jazeera and AFP