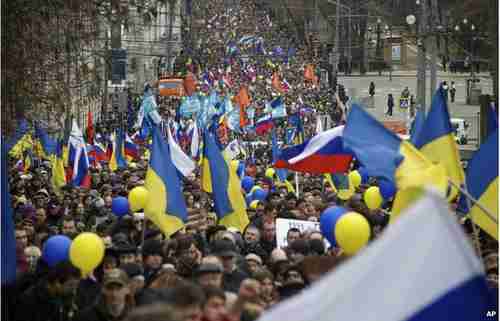 Ukraine supplies almost all of the fresh water, electricity, gas andfood that Crimea consumes, and so this may be only the first ofseveral Russian invasions of the Ukraine mainland to secure Ukrainianfacilities that supply these things.

A Russian official is justifying the invasion to guard againstVladimir Putin and by Syria’s genocidal monster president Basharal-Assad whenever either of them wants to use military force toexterminate an ethnic group. Telegraph (London) and AP

As expected, Russia exercised its veto on Saturday on a resolutionthat declares Sunday’s Russian-sponsored secession referendum inCrimea as having “no validity.” The United States was among 13members that affirmed the resolution. The interesting case was China,which has stood by Russia in vetoing any resolution that even mildlycriticized Syria’s Bashar al-Assad. In this case, China abstained.

As I wrote last week in “10-Mar-14 World View — Ukraine – Russia crisis presents problems for China,” because any secessionist resolution thatChina approved might apply to secessionist provinces in China –Tibet, Xinjiang, and Taiwan. So China was forced to abstain, leavingRussia completed isolated on its invasion of Ukraine.

After the Russian veto, the U.S. ambassador to the U.N., SamanthaPower, said that the veto would not change the aspirations and destinyof the Ukrainian people:

Some 30,000 protesters demonstrated in Moscow on Saturday againstRussia’s president Vladimir Putin, for the biggest anti-Putin protestin two years. The Ukraine invasion is the trigger for the protests,but they also protested against rising corruption, politicalrepression and censorship under Putin.

However, an even bigger pro-Putin demonstration is expected on Sunday.Putin’s increasingly nationalistic agenda is appealing to the public,giving Putin an approval rating at 70%. In a recent poll, two-thirdssaid they believed that not only Crimea but also mostlyRussian-speaking eastern Ukraine were “in essence” Russian lands.

Still, the large protest represents the second embarrassment, alongwith China’s Security Council abstention, for Putin on Saturday.Putin had hoped that Russia would experience continuing good will fromlast month’s Olympics games in Sochi, but whatever good will wasgained has now been dissipated. Reuters

As one of China’s neighbors in the South China Sea, where China isusing its military might to confiscate properties that have belongedto other nations for centuries, China and Malaysia have already had aminor but tense military confrontation. ( “29-Jan-14 World View — China’s military moves to seize Malaysia’s James Shoal” from January.)

So it’s not surprising that China is furious with Malaysia over theinvestigation of the disappearance of flight MH370, which wastraveling from Kuala Lumpur to Beijing carrying mostly Chinesepassengers. According to a Saturday editorial from Xinhua:

At a press conference in Kuala Lumpur, MalaysianPrime Minister Najib Razak revealed a trove of new informationthat virtually made the massive rummage in South China Sea for theBoeing 777 aircraft and the 239 people on board a huge waste ofvaluable time and resources. …

But it is undeniable that the disclosure of such vital informationis painfully belated — more than seven excruciating days afterthe 227 passengers and 12 crew members lost contact with theirbeloved relatives and friends.

And due to the absence — or at least lack — of timelyauthoritative information, massive efforts have been squandered,and numerous rumors have been spawned, repeatedly racking thenerves of the awaiting families.

Given today’s technology, the delay smacks of either derelictionof duty or reluctance to share information in a full and timelymanner. That would be intolerable.

As the leader of the international search and rescue mission,Malaysia bears inescapable responsibility. Other parties thatpossess valuable data and information, including plane makerBoeing, engine manufacturer Rolls-Royce and intelligencesuperpower the United States, should also have done a better job….

With time ticking away and the fate of Flight MH370 still shroudedin mystery, it is vital and imperative that the Malaysian sidework more thoroughly and efficiently and other major informationholders — not least the Unites States — be more open andforthcoming.”

It’s somewhat laughable that China, with one of the most opaquegovernments in the world, is demanding that the United States be “moreopen and forthcoming.” We wish that China would also be more open andforthcoming, especially about its preparations for a preemptivemilitary attack on the United States. Xinhua