For reasons that only Barack Obama can answer, the State Department took far too long to designate the savage Muslim group, Boko Haram, a terrorist organization. When State Department officials finally did designate it a foreign terrorist organization, they did so while never mentioning that the people being terrorized were Christians who are being targeted for their beliefs. The media doesn’t mention it, but the kidnapped schoolgirls who have finally brought this evil group to international attention are Christians.

But the State Department implied that the group had other motivations. “These designations are an important and appropriate step,” the State Department said, “but only one tool in what must be a comprehensive approach by the Nigerian government to counter these groups through a combination of law enforcement, political, and development efforts, as well as military engagement, to help root out violent extremism while also addressing the legitimate concerns of the people of northern Nigeria.”

Boko Haram originated in northern Nigeria, where there is strong support for the imposition of Islamic law – which is also Boko Haram’s goal.

The idea that a devout Muslim group that slaughters in the cause of Islam practically every day and whose very name means “Western education is sinful” has “legitimate concerns” exposes the dangerous motives of the pro-jihadist Obama administration.

Boko Haram sets schools ablaze. Boko Haram targets teachers and doctors, but above all, Christians. They murdered over 2,596 people in the first three months of 2014. What possible legitimate concerns could these savages have? Imposing Islam is not a legitimate concern.

“Legitimate concerns” – was the Obama administration referring to CIA director John Brennan’s notorious statement that “jihad is a legitimate tenet of Islam?”

The mainstream media’s sudden interest in the abducted girls and Boko Haram is amazing. Back in 2012, my organization, the American Freedom Defense Initiative (AFDI), ran a citywide bus campaign in New York, highlighting the savagery of jihadists against Nigerian Christians. One hundred bus ads called attention to the victims. The ad read, “In any war between the civilized man and the savage, support the civilized man. Support the Nigerian Christians. Defeat jihad.” 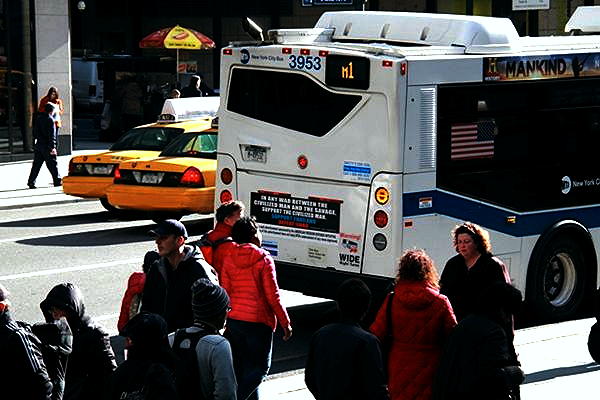 These ads were attacked by media and cultural elites as “anti-Muslim” “hate” ads, condemned by the same two-faced quislings in the mainstream media who are now writing furious editorials demanding that these abducted girls be saved.

This devout Muslim group, whose official name is The Congregation of the People of the Sunnah for Dawah and Jihad, has been waging bloody jihad in Nigeria for years, while the U.S. government, the United Nations and the mainstream media yawned. Here are just a few of the stories that should have touched off an international media firestorm, but didn’t:

That isn’t even a full list of their attacks just this year. And why are they committing all this bloodshed and savagery? Boko Haram leader Abubakar Shekau has said, “The reason why I will kill you is you are infidels, you follow Democracy… Whoever follows Democracy is an infidel.” In a video, members of this group said, “We are working for Allah and must bring Shariah to existence; we are committed to protecting Muslims from being annihilated by infidels. We are going to kill them. We will enter Churches and slaughter Christians… We are calling on all Muslims to come out and fight Jihad.”

Few people cared. I wrote on February 25, “When are good and decent people going to be free to speak about Muslim supremacist savagery? Instead, reporting on these stories of unimaginable horror is considered ‘islamophobia.’ That’s where we are in the modern age of the savage.”

Maybe the attention that the kidnapped girls has brought to this group will finally result in concrete action to stop this bloodlust. How many more people must they slaughter? It is not a good sign that the denial and willful ignorance are continuing: Secretary of State John Kerry on Wednesday blamed Boko Haram on poverty, saying that “much of this challenge comes out of this poverty where young people are grabbed at an early stage, proffered a little bit of money.” In reality, poverty doesn’t cause terrorism. Studies show that jihadis are generally wealthier and better educated than their peers.

Let’s have some uniformity in outrage against all jihad groups, not just against one monstrous incident but the ideology behind the global jihad. Only then can we begin to defeat this scourge.