Tel Aviv, Israel — The United Nations Relief and Works Agency For Palestine Refugees (UNRWA) admitted Wednesday that twenty rockets have been found at one of its schools in Gaza. The UN agency has been severely critical of Israel during the ongoing conflict over its social media platforms.

The Israeli Foreign Ministry has responded to the incident: “Yet again, Gaza terrorists abuse UN facilities to carry out their violent activities. Hamas and other terror groups are determined to put civilians in harm’s way and will respect nothing in their violent frenzy. We expect the UN and the international community to condemn and to act strongly against this brazen violation of international humanitarian law, which endangers children and UN humanitarian activities,” said the Foreign Ministry spokesperson.

UNRWA commented on the situation, noticeably refusing to place blame on any entity:

This is a flagrant violation of the inviolability of its premises under international law. This incident, which is the first of its kind in Gaza, endangered civilians including staff and put at risk UNRWA’s vital mission to assist and protect Palestine refugees in Gaza.

Immediately after the discovery, the Agency informed the relevant parties and successfully took all necessary measures for the removal of the objects in order to preserve the safety and security of the school. UNRWA has launched a comprehensive investigation into the circumstances surrounding the innocent.

UNRWA has a documented history of using their facilities to promote anti-Israel and anti-Jewish propaganda; it also has in the past been accused of aiding and abetting radical jihadists in Gaza. 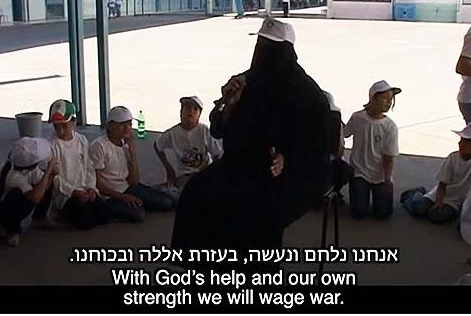 Palestinian Children at an UNRWA camp

UNRWA is the UN’s largest agency subdivision, employing approximately 30,000 people, most of whom are Palestinians.