A baby was said to be among the fifteen killed when rocket fire hit a UN-school in the northern Gaza Strip city of Beit Hanoun. What remains unclear is whether the UNRWA school was hit by an IDF shell or Hamas rockets.

According to IDF spokesperson Peter Lerner, the UNRWA facility had been ignoring demands to evacuate the shelter for the past three days. Additionally, Israel had provided a four hour humanitarian window between 10AM – 2PM local time specifically so UNRWA could evacuate the premises.

IDF Captain Eytan Buchman said of the incident at the UNRWA facility that the military is “confirming that there was serious combat in the area. We can also confirm that terror rockets from the area were fired and landed in the neighborhood of the facility this afternoon.” 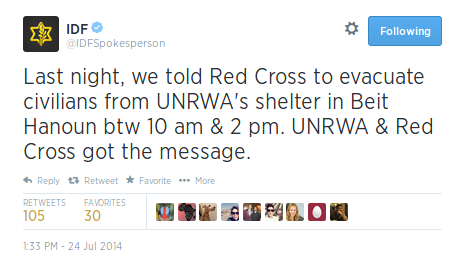 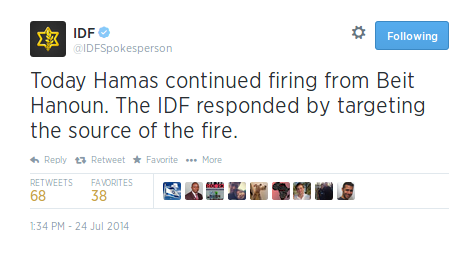 UNRWA has noticeably placed blame on Israel for the hit on their school.

UNRWA, however, has found two rocket caches stored at their children’s schools over the past week. During that incident, they noticeably refused to place blame on any organization or entity for the gross violation of international law, although it was obvious that Hamas-friendly jihadists had used their facility for weapons storage. UNRWA then gave the rockets to “local authorities”, who many speculate were militants from the Hamas terror group.

Journalists have documented Hamas to be using mosques, hospitals, schools, and heavily populated areas as cover for their terror operations against Israel. A report by the Washington Post recounted, “During the lull, a group of men at a mosque in northern Gaza said they had returned to clean up the green glass from windows shattered in the previous day’s bombardment. But they could be seen moving small rockets into the mosque.” Additionally, a Wall Street Journal correspondent showcased how Hamas had been using a hospital as a staging ground for its operations.