On Saturday, a massive pro-Palestine and anti-Israel protest took place in Washington D.C. in front of the White House. The crowd, which numbered around 10,000 according to a DC police officer, shouted chants of “free, free Palestine,” “end the genocide,” and had a number of speakers appear, including left-wing professor Cornell West.

A group of pro-Israel protestors showed up — and were encircled by police with barricades. The crowd shouted at the group and blew blowhorns in their direction. The pro-Israeli group had to be escorted out of the crowd in police vans.

One pro-Israel protestor showed up on the other side of the crowd, alone, with an Israel flag in one hand and an an American flag in the other.

The pro-Palestine protestors grew belligerent — shouting slogans at him, giving him the middle finger. One tried to light his Israeli flag on fire.

But Manny Vega, an undeterred retired U.S. Marine and Iraq War veteran, spoke to Breitbart News about the incident.

“What brought me out here is this sort of anti-Israel atmosphere that this administration is holding over the United States,” Vega told Breitbart News. “I want to show the Israeli people there are American people in our nation that support the state of Israel… And that is why am standing here with an American flag on my right hand, and Israeli flag on my left hand, in a show of solidarity with the Israeli people.”

Vega argued with one pro-Palestine protestor, who said that the State of Israel had no right to exist and would not shake Vega’s hand.

“Israelis love life; they can coexist with other nations and they have since 1948. Israel has extended a hand to shake, but they shake it and go back to fight,” Vega reportedly told the protestor.

When asked if he was concerned about the protestors turning violent, Vega said:

“Hey, I’m not going to be pushed out of here… If I was in Palestine, my throat my throat would be slit, but I’m in front of the White House. This is America, and I have every right to be here with the American flag, and the Israeli flag as a counter protest to the ‘Free Gaza, Anti-Occupation’ protest here. And pro-Hamas.”

Breitbart News asked Vega if he had any concerns about immersing himself into a hostile crowd.

“I have no fear, Vega said. “I’m not going to get stabbed, or lit on fire, but they tried to light my flag on fire.”

The waves of pro-Palestine demonstrators continued to protest throughout the city, shutting down 15th street. 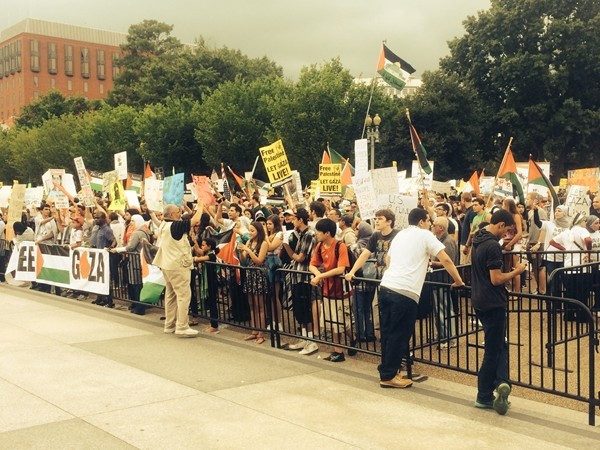 Pro-Palestine protestors gather in front of the White House. 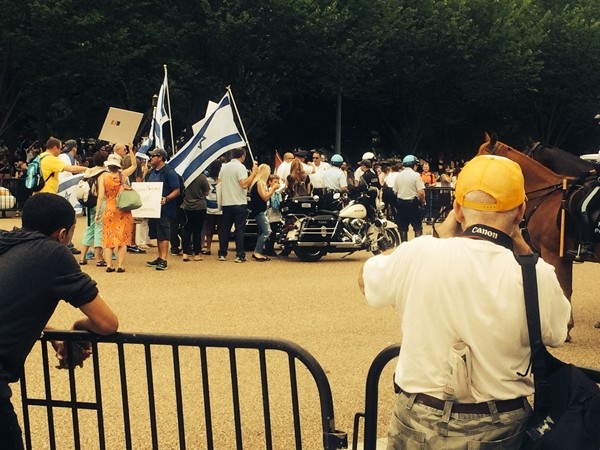 Pro-Isreal counter demonstrators surrounded and barricaded in by police. 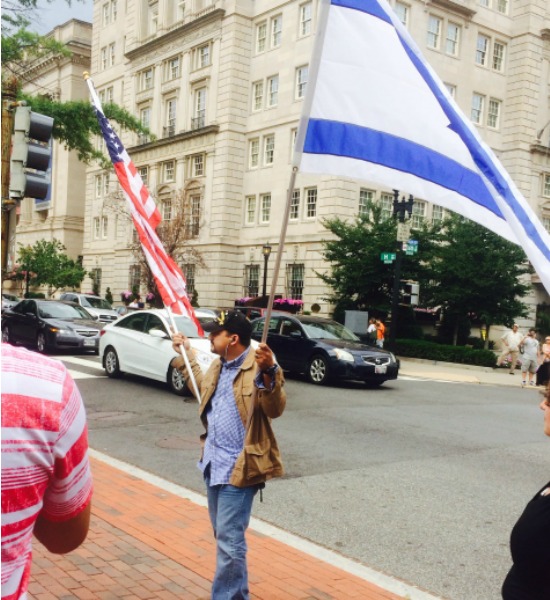