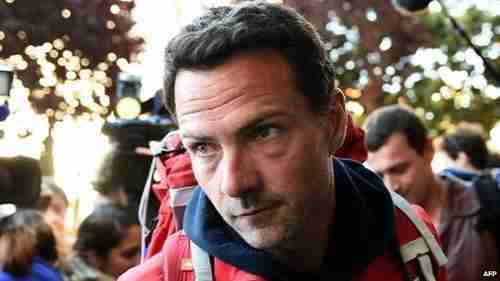 The “rogue trader” Jérôme Kerviel was released from French prison onMonday, after serving part of a three-year sentence from his 2010conviction on charges of breach of trust, forgery and entering falsedata. He’ll serve out the rest of his sentence under partial housearrest. Kerviel worked at Sociéte Générale’s as a trader. He placedfraudulent trades for months and made huge sums of money for the bank.Then his luck ran out, and his fraudulent trades failed, and he costthe bank $7.2 billion. Kerviel acted only on behalf of SocGen, andnever tried to make any money himself.

What’s so outrageous about this situation is that Kerviel is prettymuch the only person who’s ever been prosecuted for causing thefinancial crisis. As I’ve been writing for years, the evidence isunambiguous that individual “financial engineers” at Citibank, JPMorgan and other banks purposely created tens of trillions of dollarsof synthetic subprime mortgage backed that and sold them, knowing thatthey were fraudulent. Millions of people have lost their homes, orgone bankrupt, or had their cars repossessed because of the financialcrisis, and no one is prosecuted except Kerviel.

An example of the fraud that was committed was exposed in 2010 by theSenate’s Financial Crisis Inquiry Commission, as I described in“Financial Crisis Inquiry hearings provide ‘smoking gun’ evidence of widespread criminal fraud”. According to the testimony at the hearing, whatCitibank did was as follows in simple terms: The financial engineerstook a collection of subprime-backed B rated securities, applied avalue of AAA-rated securities. This is mathematically impossible, andas the Senate hearing showed, this was “smoking gun” proof of fraud.

These financial engineers were so-called because they were Gen-Xerswho had gotten Masters degrees in financial engineering in the 1990s.They knew exactly what they were doing when they created and soldthese fraudulent securities. Their Boomer CEO bosses could notpossibly have understood the math that was used to create thesefraudulent securities, but they must have known that the process oftransforming B-rated securities to AAA-rated securities wasimpossible, and had to be illegal.

The model for handling this situation occurred in the late 1980s, whenthe Savings and Loan scandal occurred. The Bush 41 administrationprosecuted thousands of people, sending many to jail.

But Attorney General Eric Holder has not prosecuted a singleindividual. Holder is always whining that no one respects him, and hewhines because he was treated unfairly when he was held in Contempt ofCongress for failing to produce documents. And yet, this jerk has notprosecuted a single individual for the financial crisis since he tookoffice in 2008. Why? Either it’s because he’s totally incompetent,or it’s because these bankers have contributed millions of dollars toObama administration campaigns or organizations endorsed by the Obamaadministration, and not prosecuting is payoff.

But at least the French sent Kerviel, who never made a penny forhimself, to jail. As I always like to say whenever I write aboutKerviel, it’s good to know that we’re all safe today, because theperson who caused the financial crisis has been identified, and is nolonger at large.

Or perhaps we’re not so safe. According to Friday’s Wall Street Journal, the S&P 500 Price/Earnings index (stockvaluations) on Friday (September 5) morning was 18.97 — almost 19 –which is astronomically high by historical standards. This means thatthe stock market is still in an enormous bubble, and the financialcrisis is going to get much worse. Deutsche Welle and AFP

In recent days we’ve been discussing the realignment of the Mideastfollowing the Gaza war and the rise of the Islamic State / of Iraqand Syria (IS or ISIS). These crises, along with the conflict inUkraine, intersect in Russia’s southern provinces in the NorthCaucasus. The population of Chechnya, Dagestan, North Ossetia and theother Caucasus provinces are largely Muslim, and have strong jihadistpresences that are kept under title control by Russia’s army.

The ISIS crisis and the Ukraine crisis intersect in the NorthCaucasus, because ISIS is posing a greater threat to the region, whileRussia is drawing soldiers out of the region to fight in east Ukraine.For years, the best combat-ready Russian forces were concentrated inthe North Caucasus to fight first Chechnya’s pro-independence movementand later the insurgency that spread across the entire region. AsRussia is increasingly drawn into the conflict with Ukraine, Moscow isforced to relocate its best prepared military units from the NorthCaucasus to Ukraine. Some observers regard this as a potential

At the same time, ISIS is posing a direct threat the Caucasus.Thousands of young Muslim men have gone to Syria to join ISIS andbecome jihadists, including many from the Caucasus. Citizens ofRussia do not require visas to visit Turkey, and there are dailyflights from North Caucasus locations to Istanbul. From there,would-be jihadists have no trouble traveling to the porous border withSyria and crossing over.

“Vladimir Putin, these are the Russian planes that yousent to Bashar. Allah willing, we will take them back to your ownturf, and liberate Chechnya and the Caucasus, Allah willing. TheIslamic State is here to stay. It is spreading and has become acaliphate. Your throne is being threatened by us. Allah will grantus success. You can see the evidence for that in the Levant. Thereare consecutive conquests here. We are coming, Allahwilling. Allah Akbar.”

Ramzan Kadyrov, the Putin-appointed governor of the province ofChechnya, immediately released a statement with a counter-threat onInstagram:

“Taking all responsibility, I declare that those whohave voiced a threat against Russia or who have mentioned the nameof our president Vladimir Putin will be destroyed right where theymade their statement. We will not wait for them to get behind thesteering wheel of a plane. They will go where his fellowterrorists are rotting.”

In the immediate future, the primary danger for Russian rule in theNorth Caucasus comes from widespread discontent for economic reasons.In the approach to the Sochi Olympics games earlier this year, Russiahad been pouring billions of extra dollars into the North Caucasus tobuild infrastructure, and to reduce public discontent. But now thatsource of funds has dried up, and the people in the North Caucasus arebearing the brunt of the European sanctions that have been imposedbecause of Russia’s actions in Ukraine. Jamestown and Ria Novosti and Memri andJamestown

WHO: Ebola virus is spreading ‘exponentially’ in Liberia

Whenever an Ebola treatment center opens in Liberia, all the beds aretaken immediately. Patients fill taxis going from place to place,hoping to find medical care. The World Health Organization (WHO) saysthat more than 3,600 people have been infected with Ebola, and 2,000have died, but as many as 20,000 will be infected. Health careworkers have been hit especially hard — 79 of them have died.number of new cases is increasing exponentially,” according to WHO.

Well, if that’s really true then a lot more than 20,000 will beinfected. Liberia has a population of 4.4 million people, and at thecurrent rate of exponential transmission, 20,000 infections will bereached in just a few more weeks, with a lot more to come. NBC News