On Wednesday night, CNN International Correspondent Jim Clancy entered full meltdown mode on Twitter after critics fired back at his assertion that magazine Charlie Hebdo’s Prophet Muhammad cartoons did not criticize the prophet. Clancy went on a conspiratorial and borderline anti-Semitic tirade, accusing those who disagreed with him as being propagandists for Israel.

When Oren Kessler of the Foundation for the Defense of Democracies called out Clancy on his shoddy analysis, the CNN reporter responded, “Hasbara?”–a word affiliated with public diplomacy but defined by Israel’s critics as Jewish and Israeli propaganda. 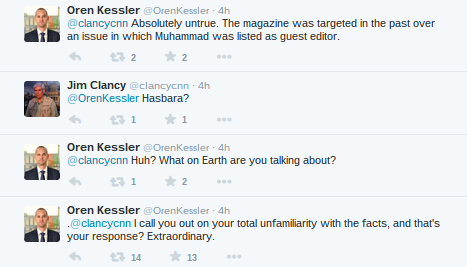 Pro-Israel blogger Elder Of Ziyon then posted several of Charlie Hebdo‘s prior cartoons, displaying to Clancy that the magazine did indeed mock the prophet, not those who had insulted the religion of Islam. Even after acknowledging that he had seen the evidence (which disproved his initial remark), Clancy would not be deterred from expressing his conspiratorial views.

He then went on an ad-hominem and conspiracy-laden tirade, falsely accusing “Pro-Israel” voices of trying to “convince us that cartoonists were really anti Muslim.” In another tweet, he added, “These accounts are part of a campaign to do PR for Israel.” In a third tweet, he again accused several Twitter accounts of being “part of” an Israeli “PR campaign that is anti-Muslim.”

In another ad-hominem attack against a criticism by Twitter user @HumanRights2K, Clancy wrote, “Thanks for the glimpse into your dreams. Everyone who stands for Human Rights is anti-Semitic. Great moniker, that.”

Clancy then revealed a notion he believes many hold. “The notion that every Muslim is a terrorist opponent of truth, justice and the American way needs to be tested. Methinks,” he wrote.

“It’s my ‘Friday nite.’ I am not in the mood to argue with the Twittersphere! Love me or leave me,” the CNN reporter wrote before continuing to accuse more of his detractors of being disguised Israeli propagandists.