The manhunt continues into Thursday for the two jihadist gunmen suspected of slaughtering twelve individuals at the Charlie Hebdo offices in Paris. French officials have attempted to zero-in on their exact location throughout the day.

At 4:00 P.M. local time, a Twitter user showed an image of heavily-armed French officers in the town of Corcy, where the militants were last seen. They are complemented by helicopters and special operations military forces, according to reports. France’s The Local reports that roads into central Paris “were locked down on Thursday as heavily armed police patrolled the entrances and exits of the city.” 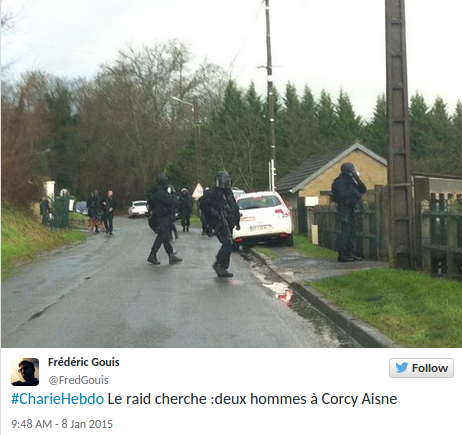 Breitbart London reported that the two men robbed a gas station at some point in the day. They reportedly stole food and gasoline before taking off. A manager of the gas station said he “recognized the two men suspected of having participated in the attack against Charlie Hebdo.”

Earlier in the day, a female police officer in southern Paris was shot dead after a man wearing a bulletproof vest opened fire on her. Officials are not aware of any indications that the attack was somehow connected to the ongoing manhunt outside of Paris. However, Police confirmed to AFP that they consider the second shooting as a terrorist act.

According to The Guardian, an AFP report has also cited a French researcher who claims there may be links between the terrorists and the Islamic State:

“French-Tunisian jihadist Boubaker el-Hakim who assassinated two Tunisian politicians in 2013 is a member of IS. He was previously part of the “Butte-Chaumont network” in Paris – alongside Cherif Kouachi – that helped send fighters to join al-Qaida in Iraq in the mid-2000s.

Hakim “represents the link between the Kouachi brothers and (IS),” said researcher Jean-Pierre Filiu, a leading expert on radical Islam at Paris’s Sciences Po university.

“It is impossible that an operation on the scale of the one that led to the massacre at Charlie Hebdo was not sponsored by Daesh,” he claimed, using an alternative name for IS.