The pizza makers of Neapolitan Pizzeria Don Ernesto decided the Pope deserved a specially personalized pizza, whether he had ordered it or not. The ingenious baker jumped over the makeshift barrier lining the route of the papal entourage and ran up to the Popemobile, handing the pizza to Pope Francis, while his comrades got the whole scene on video.

The pizza baker was Enzo Cacialli, the son of Ernesto, who had served pizza to President Bill Clinton during a visit to the G7 in 1994.

Naples is the pizza capital of Italy and is known for its thick crusts and fresh buffalo mozzarella. The pizza that Cacialli delivered to Francis this weekend had “Il Papa” written across it in dough and was decorated with yellow tomatoes rather than red ones, a choice meant to reflect the papal colors of white and gold. 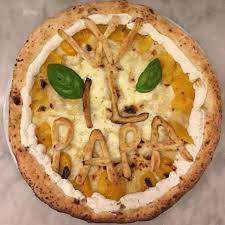 “I adorned it with the Vatican colors,” Cacialli said, “ with small yellow tomatoes, buffalo mozzarella, and buffalo ricotta. My hands were still full of flour.”

“One of the most beautiful days of my life. I won’t forget it,” he said.

Cacialli was already a big fan of Pope Francis, but he’s a bigger one now. “He manages to surprise us with his energy and make us want to do better. Pope Francis is a simple person and gets common people to feel involved and to want to do something for others,” he said.