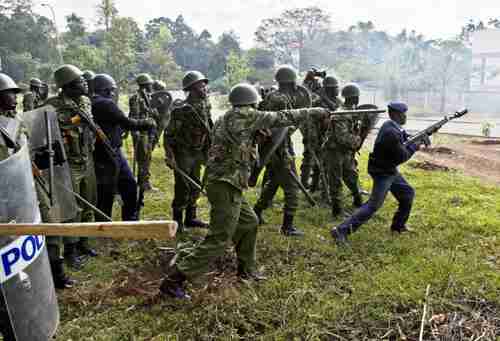 The Somali terrorist group al-Shabaab, which has been out of the news lately because Islamic State (IS or ISIS or ISIL or Daesh) has been grabbing all the headlines, finally made its own headlines on Thursday by killing over 147 people, mostly Christian students, at Garissa University College in Kenya. The students were massacred in their dormitories. Christians were singled out and shot dead. 79 were injured, and 587 were led to safety. Al-Shabaab has retained its loyalty to al-Qaeda, and has not pledged itself to ISIS, as other terror groups have.

Al-Shabaab has targeted Christians in the past. In December, al-Shabaab terrorists killed 36 mainly Christian miners working in a quarry in northern Kenya, near the border with Somalia. The 60 or so workers were asked to recite the Shahada, an Islamic creed declaring oneness with God. Those who couldn’t were shot and killed.

This follows a similar incident that occurred on November 22, when Al-Shabaab terrorists forced a bus carrying 60 passengers to stop. They asked the passengers to recite Koranic verses, and those who were unable to do so were lined up and then killed. 28 people were killed, 19 men and 9 women.

The new attack was also reminiscent of a 2013 al-Shabaab attack in 2013 at the Westgate shopping mall in Nairobi. That attack lasted for three days, and involved al-Shabaab recruits from a Somali community in Minneapolis, Minnesota. The attack brought Kenya’s president Uhuru Kenyatta under a great deal of criticism for doing nothing to stop terrorism.

So on Thursday, Kenyatta announced that he would defy a court order that prevented the recruitment to Kenya’s police service. In October 2014, the High Court blocked further police recruitment because of corruption in the selection process. Kenyatta will defy the court order, and is ordering 10,000 new recruits to report to the Kiganjo police training college. Daily Mail (London) and Capital FM (Kenya)

On Sunday, I saw Bill O’Reilly’s “Killing Jesus,” which presents the “historical Jesus,” the life of Jesus as confirmed by contemporary historical sources.

From the point of view of Generational Dynamics, one thing that comes through strongly in watching this movie is how much Jesus was a 1960s-style activist. Almost every word about love and peace, and every action such as demonstrating against the older generation of Jews, sounded and looked like people from the 1960s. I was also reminded of the 1960s Broadway musical “Jesus Christ Superstar,” which also portrays Jesus as a 1960s-style activist.

This is a compliment to Jesus, not a criticism. Jesus accomplished his goals through peaceful activism, as contrasted to Mohammed, who led an army.

One more point: Jesus’s ministry occurred during a generational Awakening era, like America in the 1960s. Mohammed’s time occurred during a generational crisis war between Mecca and Medina, like World War II. This difference is reflected in the two holy books. For example, many men are killed during a war, leaving behind many unattached women whose presence can destabilize a society. This fact alone explains why the Koran permits polygamy, while the Bible does not.

The movie “Killing Jesus” will be repeated on the Fox News Network at 8pm and 11pm this evening (Friday) and again on Sunday. This is appropriate, as this weekend is Easter for Western Christians. As far as I know, the movie will not be repeated next weekend, for Orthodox Christian Easter. Fox News