More than 70,000 people are expected to march through London on Saturday to protest against the Conservative government, but a radical anarchist cell has other plans. It wants to hijack proceedings and cause massive riots that could engulf the capital.

Speaking at a private event for left-wing ring leaders in East London, a number of the country’s highest profile anarchists met to share secret plans to attack London last week, but were infiltrated and caught on hidden camera by the Mail on Sunday newspaper. The group discussed triggering riots that would rival the enormous outbreak of civil disobedience that took place in 2011 after the death of an armed black man in Tottenham.

Group members believe the organised ‘End Austerity Now’ march planned for Saturday is not radical enough and were taped planning to pervert and disrupt proceedings, including inciting violence and even storming the stage when socialist Labour MP Jeremy Corbyn and comedian turned social justice warrior Russel Brand address the crowds.

The agitators recorded are by no means inexperienced when it comes to stirring up trouble. ‘London Black Revolutionaries’ founder Arnie Hill, who is believed to be behind the violent confrontations with police during post-general election unrest in central London, was present at the meeting. Police officers were injured after anarchists threw poles at them, and a war memorial to women two served 1939-45 was defaced with anti-Conservative graffiti. 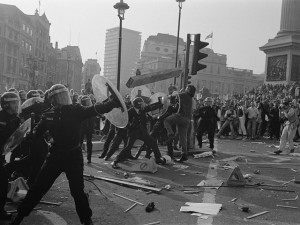 Hill is also thought to have been among the ringleaders of the gang who stormed the roof of the Conservative party central office at Millbank during a protest in 2010. During the occupation of the tower roof, students and anarchists dropped signs and shards of broken glass onto police officers below, and one even dropped a fire extinguisher 120 meters down.

One man recorded, who was identified as being involved with trade unions, said the ambition was to go well beyond mere protests. Instead they aspired to ultimately make the country ungovernable, precipitating a collapse of the Conservative government.

Those speaking at the meeting not only likened the violence they wanted to start to that in Tottenham in 2011, but went further, remarking that Saturday should be like “the poll tax riots with knobs on”.

One anarchist group put out the following statement regarding the weekend: “We want the London Mob to rise again. Once we’ve taken the road, to stand and fight the cops. Don’t wait for them to hit us, but strike first. Even if just a few people are actively attacking, it can help them a lot if the rest of the mob holds together and supports them.

“Make some plans. Research events, targets, places, strategies, tactics, means. Set out committed to act, to take initiative, not wait for others to act for us. Prepare tools, resources, propaganda, call-outs, whatever we need”.