A crowd of well over 1,000 gathered outside the Federal Building in West Los Angeles to demand that Congress vote “no” on the nuclear deal with Iran–and to override President Barack Obama’s anticipated veto. The majority of participants were from the local Jewish community, but there was also a significant Christian presence, as well as participation from Muslims opposed to the Iranian regime.

“I don’t mind the military option. I’m not gonna lie to you,” said Reza Farahan, one of the stars of the hit Bravo reality TV series Shas of Sunset, in his remarks to the crowd. Indeed, there was almost as much opposition expressed towards the Iranian regime as towards the lopsided deal it struck with world powers earlier this month. Los Angeles has a large Persian immigrant community, composed of people of many different backgrounds, most of whom left Iran in the wake of the Islamic Revolution in 1979, leaving careers and relatives behind.

Most other speakers focused on arguing that the Iran deal makes war more likely, and that a stronger deal would provide better guarantees of peace. The rally was coordinated with other, similar demonstrations nationwide, and coincided with the Jewish holiday of Tisha B’Av, a day of fasting and mourning the destruction of the ancient Jewish Temples in Jerusalem, among other grim tragedies in Jewish history.

Support was strong from passers-by, with the enthusiastic honking of cars on Wilshire Blvd. often drowning out speakers at the podium. 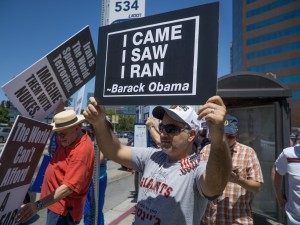 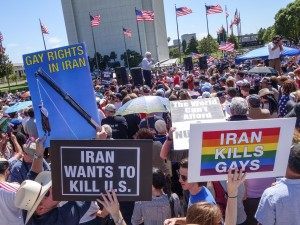 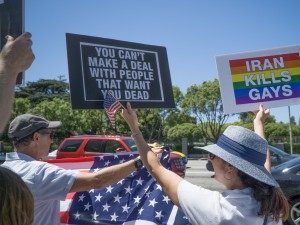