The European Union has been told to abandon its “messianic” project of exporting democracy by Russia. A prominent diplomat has said the EU should instead seek to solve its problems in partnership with Russia, not at its expense. 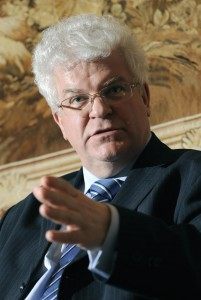 Speaking at the Alpbach Forum, the Permanent Representative of the Russian Federation to the European Union, Vladimir Chizhov (pictured right) blamed a combination of the Treaty of Lisbon and enlargement of the EU for contributing to what EurActiv.com reports as “the current paralysis of relations between the EU and its largest neighbour.”

Russia’s diplomatic representative was speaking on a panel discussing ‘The EU and Russia: Rivals, Opponents, Partners?’ for which the following summary was offered by organisers:

“The Ukrainian crisis has shown that a peaceful Europe can only be built on a mutually beneficial cooperation between the EU and Russia, whether in the areas of energy, commerce, or relations with other regional actors. How can EU-Russia relations be developed into a win-win situation for both parties?”

According to Chizhov, Russia has witnessed “with understandable concern” the establishment of “an exclusive ideological underpinning of the European Union.”

Although not actually naming anyone, he referenced EU high officials at the May 2013 summit of the Eastern Partnership who spoke of “winning Ukraine” in a “geopolitical battle of Europe.” In fact, EurActiv reports the statement came from Lithuania’s Minister of Foreign Affairs, Linas Linkevicius, when his country was holding the rotating EU presidency in the second half of 2013.

Chizhov said this was “clearly a wrong approach” adding “Ukraine should have never been viewed as a geopolitical playground.” Instead, what he described as an “economically fragile and ethnically diverse country” needed a national identity “sufficiently ample to embrace all ethnic and linguistic groups inhabiting the country.”

In order for such an identity to blossom, Chizhov said “time, stability and good relations with both the EU and Russia are of essence” but that this is something difficult to achieve within the EU. Since 2004’s rapid expansion and the subsequent Lisbon reforms he said the flexibility of the EU’s positions in the international arena have been narrowed such that “the price for ‘speaking with one voice’ has been the lowest common denominator of the resulting message.”

Specifically regarding the Treaty of Lisbon, Chizov said, “The inward-looking peace project has acquired a new somewhat messianic dimension – the EU now ‘seeks to advance in the wider world… principles which have inspired its own creation.” He then questioned whether exporting democracy is “consistent with the objective of maintaining peace inside and beyond the European continent” suggesting the EU faces “a hard choice between the two.”

Chizhov’s message from Russia was not, however, relentlessly negative. He did offer a way to build EU-Russia relations as “a genuine partnership of equals.”

This included removing sanctions, which he said were shown to be costly and are therefore “hardly what the EU needs in the current volatile economic environment.” He also called for a pragmatism to be prized over ideology before concluding by speaking of the areas where he thought Russia and the EU should be actively cooperating. He ended:

“In the Russian view, which, I understand, may not be universally shared by this audience, the disastrous turn of events in the region of the so-called ‘Arab spring’ as well as in Ukraine has a lot to do with the attempt to inject the notion of supremacy of Western values into highly complex regional environments.

“Certainly, the EU alone can hardly be blamed for regional instability. Nevertheless, the European Neighbourhood Policy, in my view, was not made any more attractive by the heavy-handed manner in which the EU sought to ‘civilise’ the region and impose its own norms and standards there.”

Listing terrorism, illegal migration, drug and human trafficking, he urged that Russia and the EU should reopen channels of communication that had been largely closed as a result of the Ukraine crisis, adding: “while Russia and the EU severely limited their cooperation, the terrorists did not.”