Is there nothing green ideologues won’t do to try to breathe pseudo-scientific life into their bankrupt climate change thesis?

Not by the looks of this desperate newspaper story, which attempts – as so many have before – to make hay out of the ragingly fashionable crisis in Syria by linking it to man-made global warming.

“Syria was destabilised by 1.5 million migrants from rural communities fleeing a three-year drought that was made more intense and persistent by human-driven climate change, which is steadily making the whole eastern Mediterranean and Middle East region even more arid.”

Seager is careful to note that this drought affected several countries besides Syria.

“Syria is not the only country affected by this drying. Lebanon, Jordan, Israel, Iraq and Iran are too. However the various social, religious and ethnic wars play out, in the coming years and decades the region will feel the stress of declining water resources.”

And well might he be cautious because the oft-cited paper (by Kelley et al) he co-published earlier this year at Proceedings of the National Academy of Sciences simply doesn’t support the thesis that “climate change” was in any way responsible for the Syrian civil war.

There are, as Andrew Montford at Bishop Hill notes, at least two reasons why it doesn’t.

The first is that the paper wasn’t about Syria on its own but about a much bigger area – the greater Fertile Crescent, which also covers most of Iraq, half of Iran and the majority of Turkey. If you look at Panel B below, it becomes immediately clear that the major drying trend has been nowhere near Syria, but rather on the Turkey/Iraq border and in Iran. 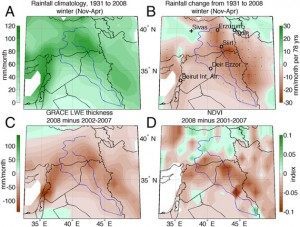 And the second (Panels C and D) is that the “significant” recent local drying it claims to have observed at 25 weather stations – only one of them in Syria – uses a significance level of just 0.1. Which, statistically speaking, is about as close to negligible as the tortured definition of “significant” has ever been.

Yes, it remains true that there was a drought in parts of Syria in the run up to the civil war. But just as “weather” is not “climate” – as the warmists so often like to remind us when the weather doesn’t support their claims – so a drought is, by nature, an event on too short a timescale to be roped into any theory about climate change, let alone man-made climate change.

Needless to say, this hasn’t stopped the usual suspects trying to pretend otherwise.

Here’s Mother Jones last year in a piece subtitled “How climate change helped spark a bloody civil war.” It concerns a comic strip – produced by the lavishly funded, Hollywood-star-studded Years Of Living Dangerously project – which explicitly links the drought to the outbreak of fighting against Assad’s regime.

“If current rates of greenhouse gas emissions continue, more extreme droughts will return and water shortages will worsen. And Syria will remain as a warning of the devastation of that can occure when tenuous political situations combine with the stresses of climate change.”

Here’s the Washington Post in 2013 with a piece tenuously headlined “Drought helped cause Syria’s war. Will climate change bring more like it?”

Its tenuous not least because in the article, the quoted “experts” – founders of the Center for Climate and Security, a body founded expressly to demonstate that there IS a link between climate change and regional conflict – says this:

We can’t say climate change caused the civil war. But we can say that there were some very harsh climatic conditions that led to instability.

There is plenty more where this came from.

But below, in the body of this article, comes a quote from Colin Kelley (co-author of the study above), explicitly contradicting the headline.

“We’re not arguing that the drought, or even human-induced climate change, caused the uprising.”

So it goes on. The New York Times; The Atlantic; National Geographic and, most recently, the formerly respected publication known as TIME have lent their weight to this junk thesis for which there is no credible scientific evidence.

As too, of course, has President Obama.

But then, as any liberal, greenie or Social Justice Warrior could tell you, when the facts don’t suit the narrative, change the facts.