The Pentagon has revealed that on September 15, two Chinese “Flounder” JH-7 fighter-bombers intercepted an American RC-135 surveillance plane over the Yellow Sea, in international airspace.

The Chinese jets came within 500 feet of the American plane, a distance described as “unsafe” by the U.S. Pacific Command, although they did not classify the event as a “near collision.”

“While unsafe air encounters are normally considered serious by the Pentagon, military officials said the incident didn’t alarm them since it appeared to be more of an exception than a trend,” reports the Wall Street Journal.

In fact, such behavior is so unusual that the previous Chinese intercept described by the WSJ was said to be the work of a “rogue pilot,” who harassed a number of American planes, including one incident that involved air show barrel roll theatrics. Safe “intercepts” that keep the aircraft separated by respectful distances are common events.

So why this sudden, unsafe encounter, right before China’s president Xi Jinping is due to visit the United States? Was it the work of a couple of hot-headed young “rogue pilots” looking to show off their flight skills?

The Hill reports that the crew of the RC-135 perceived the maneuvers of the Chinese jets as alarming, with the American pilot reporting that one of the Chinese planes “passed in front of his nose in an unsafe fashion.” 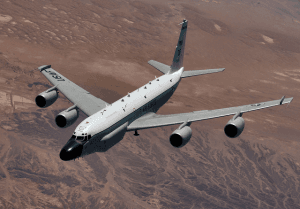 When one of these zooms less than 500 feet in front of your nose: 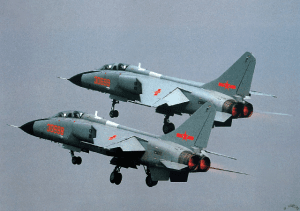 “Yet another dangerous Chinese intercept of a U.S. aircraft last week shows that China feels emboldened to continue its pattern of aggressive behavior in the Asia-Pacific region,” said Senate Armed Services Committee chairman John McCain (R-AZ), as quoted by The Hill. “That this flight came amid negotiations of rules for air-to-air encounters and just one week ahead of President Xi’s arrival in the United States raises further questions about China’s intentions and the Obama Administration’s response thus far.”