A report released this month on “The Situation of Human Rights in the Islamic Republic of Iran” reveals that Iranians are worse off under “moderate” President Hassan Rouhani than his more conservative predecessor Mahmoud Ahmadinejad and that, based on their current trajectory, they are expected to exceed well over 1,000 executions by year’s end.

“The human rights situation in the country remains dire,” Dr. Ahmed Shaheed, the UN’s special rapporteur on Iran, said during a briefing at the United Nations last week.

Iran executes more individuals per capita than any other country in the world. In his 26-page report, Shaheed notes that between January 1 and September 15 of this year, Iran executed at least 694 people by hanging, which included at least 10 women and one juvenile. In 2014, Iran clocked in at a shocking 753 executions.

Shaheed’s analysis also found that “more than 480 persons were flogged during the first 15 days of Ramadan for not fasting,” but that the Iranian regime has falsely maintained that only three individuals were subject to this punishment for their non-observance of the fast. Additionally, two people who were convicted of theft had their limbs amputated mere weeks prior to the conclusion of the Iran nuclear deal (the Joint Comprehensive Plan of Action or JCPOA) in July.

A man identified as “Hamid S.” reportedly had his left eye and right ear surgically removed in January of this year after being found guilty of attacking another man with acid in 2005, which caused the victim to lose the same body parts. Another man was also forcibly blinded in March of this year in a process known as qisas, or “retribution-in-kind,” for throwing acid on another man in 2009. 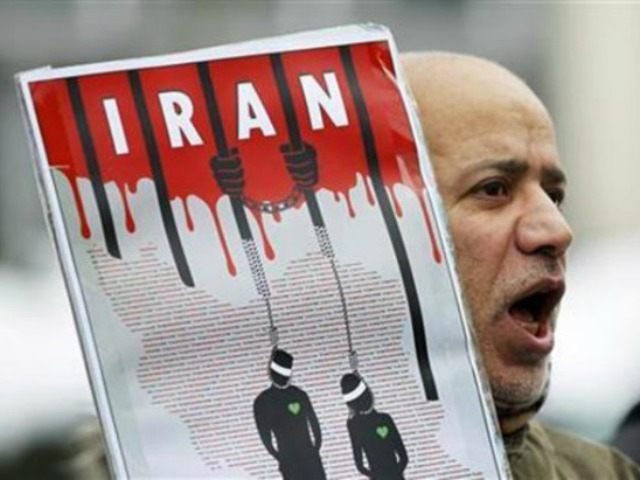 An Iranian exile shouts slogans to protest against executions in Iran during a demonstration in front of the Iranian embassy in Brussels, December 29, 2010. (Francois Lenoir/Reuters)

The egregious human rights abuses do not stop there. Adhmadinejad had infamously said gays do not exist in Iran several years ago. Shaheed’s recent UN report indicated that Rouhani had rejected the UN’s proposals to improve the situation of LGBTs in the Islamic Republic of Iran. Homosexuality is punishable by death in Iran, and the Ayatollah Khamenei has declared a fatwa that essentially forces gay and lesbian individuals into gender reassignment surgery, and a tremendous amount of pressure comes from families of these individuals who are concerned about their image in society.

Despite perceived social strides forward in the Iranian regime, particularly by way of reformists who seek to implement change internally, the hardliners still maintain control.

Omri Ceren, managing director of press and strategy at the Israel Project, told the Jerusalem Post on Sunday that “[e]very day brings new evidence that, whatever moderates there are in the Iranian political system, they’re not the ones in control… At some point the Obama administration will have to come to grips with who they’re dealing with, and work with Congress to push back strongly.”

While the Iranian regime officially recognizes Zoroastrianism, Judaism, and Christianity as minority religions, the report maintains that members of these faiths continue to face severe restrictions in their ability to practice. Adherents of the Baha’i faith remain the most severely persecuted minority religious group in Iran.

Women are also barred from attending sporting events such as volleyball matches, a concern the JPost describes as a “gender apartheid” system. The UN report notes that “Iran ranked 135 of the 142 countries assessed by the World Economic Forum for women’s political empowerment in 2014.”

According to i24News, Iran has consistently barred Shaheed from visiting the country and “while Iranian officials have met with him, they have strongly disputed his criticisms and have frequently denounced his reporting as politically motivated and lacking credibility.”