The Indian Museum in Kolkata has inaugurated an exhibition celebrating the worship of Hindu gods in Japan, a centuries-old tradition fueled by religious syncretism as Japanese worshippers have blended Hinduism into Buddhism and Shintoism.

Photographer Benoy K. Behl, whose career has been largely dedicated to Indian cultural influences abroad, celebrated the opening of his exhibition, “Indian Deities Worshipped in Japan,” which will run from January 11 to 21. As the description of the event notes, “A score of Hindu deities are very actively worshiped in Japan. There are innumerable representations of Lakshmi, Saraswati, Indra, Brahma, Ganesha, Garuda and other deities.”

The Times of India puts the number of Hindu gods worshipped in Japan at around 20, and notes that many of those still worshipped in Japan are not in India, like Vayu and Varuna. Certain Sanskit texts have also been reportedly better preserved in Japan than in India and, Behl says, Japan’s lack of colonial history has allowed much of what was lost in India during British rule to remain preserved.

“In many ways, this philosophic understanding is most well preserved in Japan. Japan has not had the breakdown of cultural norms which India suffered when a colonial education system was created. Therefore, most Indians learnt about our own culture from the Western point of view,” Behl writes.

In previous work on the subject, Behl has noted that the most popular Hindu gods are also among the most popular in modern Indian worship, such as Saraswati and Ganesha. He quotes Yasukuni Enoki, former Ambassador of Japan in India, as noting that the one thing lost is the gods’ names. “Since these Hindu deities were introduced into Japan through China, with Chinese names, Japanese people are unaware of their origins,” he notes.

Saraswati, Hindu goddess of wisdom and artistic expression, is worshipped as Benzaiten in Japanese temples. The Japanese embassy in Nepal notes that her Japanese equivalent is better known as “a beautiful goddess of fortune, which was originally a basic attribute of goddess Laksmi. So, the Nepalese saying that Laksmi (wealth) and Sarasvati (learning) rarely come together does not apply to the Japanese context.”

Benzaiten is a particularly popular image in Japanese kitchens and described as one of the “Seven Lucky Deities” to be placed in a home for blessings. She still retains some of Saraswati’s attributes, “known as the patroness of writers, composers, musicians and painters,” the Hindustan Times notes.

Ganesha, the popular Hindu god son of Parvati, is also worshipped in Japan as Kangiten. He retains his physical features, such as his elephant head, in much of Japan’s Hindu iconography. “Ganesha is worshipped as god of love by many young boys and girls for achieving success in their courtship,” the Times adds. 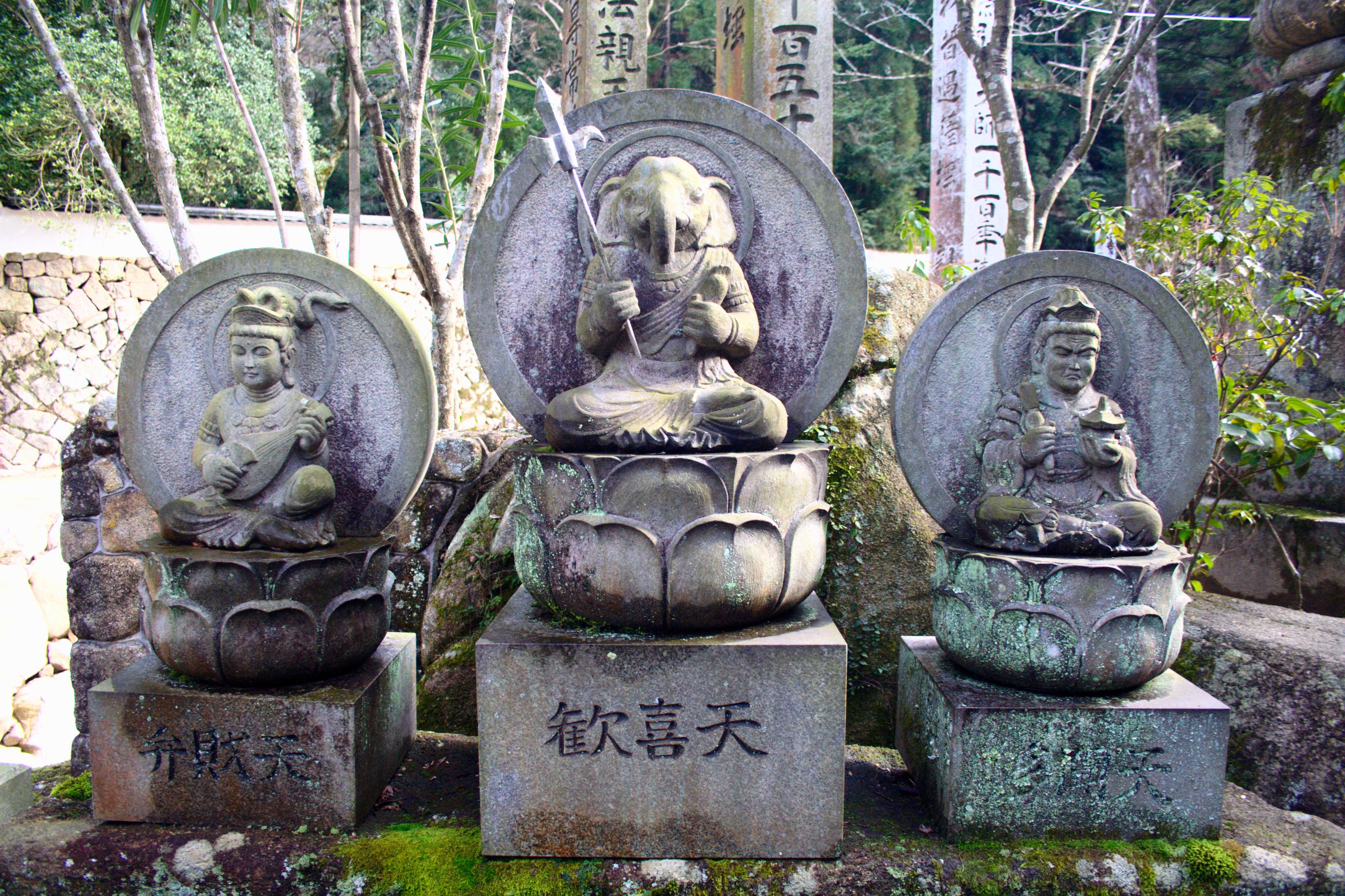 While almost 80 percent of Japan’s population practices Shintoism and Japan’s official Hindu population is negligible, the island nation has become fertile ground for syncretic religions, so much so that the CIA World Factbook notes that most who practice Shinto also subscribe to parts of Buddhism. In some cases, Japanese people have merged more than two religions in their worship. For example, organizations like the Vedanta Society of Japan openly worship Hindu deities while stating in their mission statement that the religion “accepts all the religions of the world and reveres the great prophets, teachers, and sons of God, because it recognizes the same divine inspiration in all.”

Religious syncretism is the practice of fusing unrelated religious beliefs into a hybrid faith that uses the names, spiritual concepts, and philosophies of multiple religions in concert. In the West, this social phenomenon is most visible in the Caribbean. In Cuba, Haiti, Puerto Rico, and much of the Caribbean, it is not uncommon for Catholicism to be practiced simultaneously with parts of Nigerian Yoruba paganism, creating the hybrid religion santería. As Japan has done in renaming its Hindu gods, so too have much of the Yoruba gods been rechristened (literally) with the names of Catholic saints.

With past projects, Behl has noted that he attempts to find Indian cultural influences abroad so as to bring greater appreciation for them within India. Following the release of a documentary last year titled Yoga: An Ancient Vision of Life, Behl encouraged the Indian government to emphasize Indian culture in primary school education. “Actually, it is we Indians who have lost sight of our own heritage and it is the world that is recognising these things (yoga). It is fortunate that the Indian government has recognised the importance of yoga and this will take it a long way,” Behl told the Indo-Asian News Service in an interview, following Prime Minister Narendra Modi’s establishment of a National Yoga Day. The national holiday sparked an outrage in Muslim areas of India, where radicals decreed it haram.