Mass protests force Moldova to choose between Europe and Russia 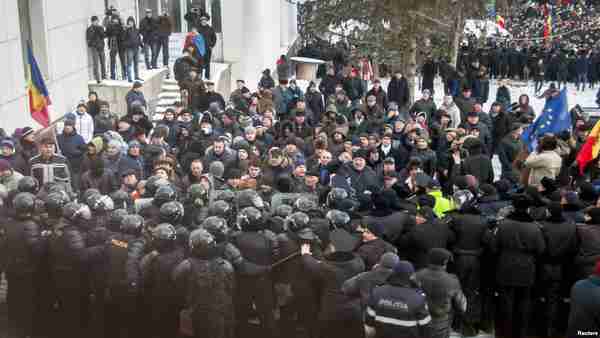 Months of anti-government protests in Chisinau, the capital city of Moldova, reached a head last week on Wednesday, when tens of thousands of stormed the parliament building, and police began using tear gas against the protesters, resulting in dozens of injuries. This mass riot was triggered by parliament’s approval Pavel Filip to be prime minister. The protesters chanted “We Are the People” and “We Want our Country Back” and “Down with the mafia” in both Romanian and Russian, and demanded that the president, prime minister, and parliament all resign, and new elections be called.

Protesters are demanding the investigation of the “theft of the century” – the disappearance of an incredible $1.5 billion, 15% of the country’s GDP, from three national banks ahead of the parliamentary election of 2014. The money was discovered to be missing a year ago, in January 2015. The prime minister Vlad Filad was arrested on corruption charges, and the parliament appointed a successor, Valeriu Strelet. In October, Strelet was dismissed in a no-confidence vote, and Moldova has had no government until Wednesday of last week, when the parliament selected a new prime minister, Pavel Filip.

The prime minister selected last week, Pavel Filip, is still nominally on the pro-Europe side, Filip is thought by many to be under the control of billionaire Vladimir Plahotniuc. As a result, both pro-Europe and pro-Russia protesters temporarily put aside their differences and turned against Filip after he was selected last week.

If there are new elections in the near future, it is expected that the pro-Russia side will win in the parliament, which will then select a pro-Russia prime minister. However, Filip, and Plahotniuc behind him, are resisting that outcome.

Filip himself is making the usual claim of politicians in power by saying that his stepping down could harm the country:

We could find ourselves in a deep economic and social crisis. It’s possible that Moldova wouldn’t be able to pay salaries and pensions for four months.

Adrian Candu, the speaker of parliament, says that there is no legal way to call elections now, and adds:

The current government and parliamentary majority really has to show results in days and weeks. We are counting on the first 100 days of the government to show actions and results. The time for nice messages is over.

However, both pro-Europe and pro-Russia groups accuse Filip and Plahotniuc of holding on to power in order to hide their corruption. Many observers do not believe that the new government will have even 100 days before widespread riots begin, perhaps modeled after the Maiden riots in Kiev, the capital city of Ukraine, in 2013-2014, leading to a major European and Russian crisis. BBC and Irish Times and Jamestown

Moldova is a small country squeezed between Ukraine and Romania. A strip of land on Moldova’s border with Ukraine is the province of Transnistria. Polls in Transnistria indicate that people there would like to secede from Moldova and join the Russian Federation, in the same way that happened to Ukraine’s Crimea peninsula. In fact, when Russia was in the process of invading Ukraine in 2014, leading to the annexation of Crimea, it was widely believed that Russia’s invasion would continue on to the port of Odessa and then on to link up with the secessionist Transnistria province of Moldova.

That never happened, as the Russians became bogged down in East Ukraine, and the Russian economy was beset by Western sanctions and then by crashing oil prices. And now with Russia’s military adventure into Syria, Russia is stretched too thin to revive a large military incursion into western Ukraine.

Now there is a new opportunity for Russia. If there are new elections in Moldova, and if, as expected, the pro-Russia factions win, then Russia will have a political change of government that will give it influence of Moldova without the cost of a military invasion.

If pro-Russia forces come to power in Moldova, it would be a big public relations coup. Furthermore, such a victory would help settle the Transnistria issue, by unifying the secessionist province with the Moldovan government so that they’re all pro-Russia.

However, such a victory would be a mixed blessing for Russia, as it would trigger other problems, according to Russian journalist and political analyst Gevorg Mirzayan. In these days of sanctions and counter-sanctions, both Ukraine and Romania would act harshly to pro-Russian forces in Moldova.

[Ukraine’s] reaction to pro-Russian forces in Chisinau would not be difficult to guess – a sharp hardening of relations and an economic blockade of Moldova from the east would be almost inevitable.

As for Romania, here too there are several possible negative scenarios. It’s doubtful that the EU will simply close its eyes on Moldova’s demonstrative return to the Russian orbit, and using a deterioration of the socio-economic situation, they would attempt to convince Moldovans that they have made the wrong choice.

As a result, Moscow, which already has its hands full, will have to analyze all the options for supporting a pro-Russian government in Chisinau.

Mirzayan points out that if the pro-Europe factions continue to discredit themselves, especially following the corruption scandals, then the pro-Russia opposition will become stronger in the long run. Global Risk Insights (2015-Nov-10) and Sputnik News (Moscow) and Global Research