The Christian aid group Voice of the Martyrs (VOM) has published a new “Prayer Map” highlighting countries where Christians face violent persecution at the hands of Islamic extremists around the globe.

Though the primary purpose of the map is to encourage people to pray for persecuted Christians, it also seeks to educate citizens on the state of Christian persecution throughout the world, especially perpetrated by radical Islamists, as well as active engagement to assist persecuted brethren in need. 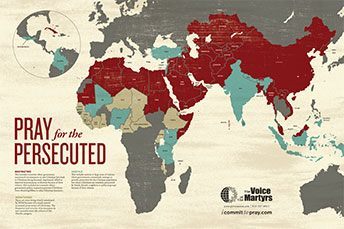 One side of the Map (pictured right) identifies countries where Christians are beaten, tortured, imprisoned and even killed because of their faith. The reverse side highlights nations where Christians face violent persecution by Islamic extremists, showing the dominant Islamist groups in each region

The resource identifies the location of nine Islamic extremist groups that are actively attacking Christians, including ISIS, Al-Qaida, the Taliban, Boko Haram and Al-Shabaab, helping people get a sense of where the jihadists operate worldwide.

Restricted nations are those where Christian literature is banned or government-sanctioned conditions result in Christians being harassed, imprisoned, killed or deprived of possessions or liberties.

Hostile areas are those where governments attempt to provide protection for the Christian population, but Christians are nonetheless victims of violence.

Formerly oppressed countries indicate nations where Christians were persecuted but now have freedom to worship and practice their faith.

The Voice of the Martyrs was founded in 1967 by Pastor Richard Wurmbrand, who had been imprisoned 14 years in Communist Romania for his Christian beliefs. The group is now a non-profit, inter-denominational Christian association dedicated to assisting persecuted Christians worldwide.