Dozens of Vietnamese citizens congregated in their capital, Hanoi, to commemorate the anniversary of a battle against China in the South China Sea and demand that Beijing withdraw its presence in the contested Spratly and Paracel Islands.

Vietnam is a communist country, like China, and rarely allows such protests. That the group was allowed to peacefully assemble and voice its political opinions is an indication that the Vietnamese government is growing increasingly impatient with China’s colonization of disputed territory in the region.

Reuters reports that the crowd of protesters totaled about 150 people, who made clear that they were not only there to remember the fallen in the obscure 1988 Spratly Islands battle, but to challenge China’s growing presence in Vietnamese waters. The crowd chanted, “Down with invasive China,” brandished anti-China signs, and wore banners with anti-China slogans on them. One protester told Reuters the 1988 event, which occurred in Johnson Reef, was “the first step in China’s plan to militarize the South China Sea.” Sixty-four Vietnamese soldiers died in that event. 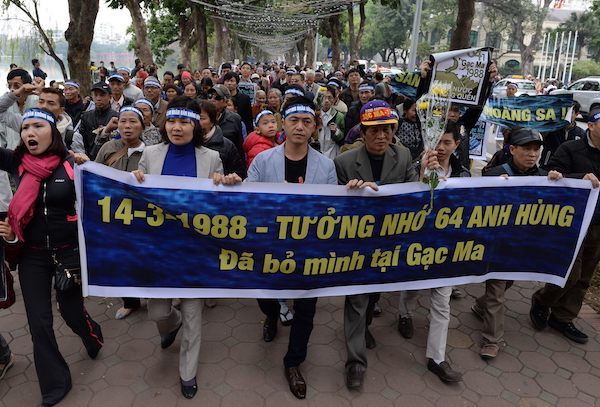 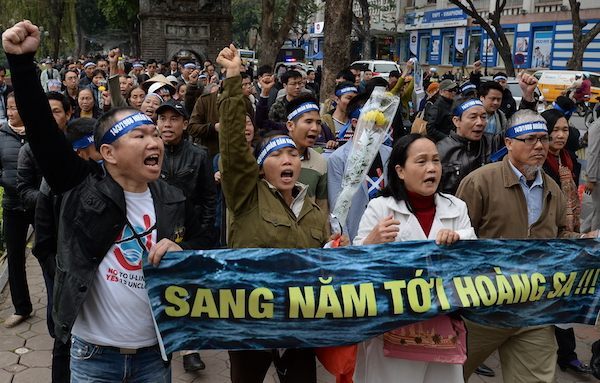 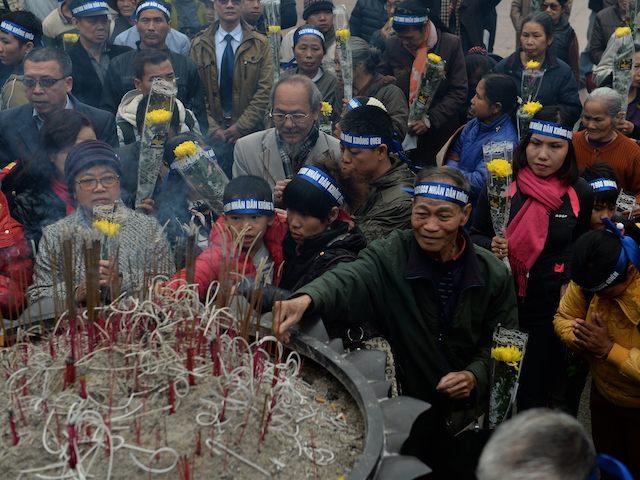 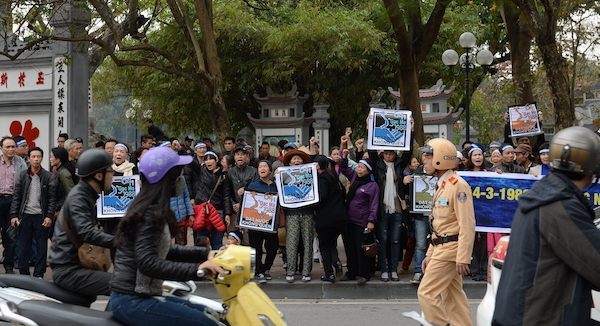 China has since built an artificial island on Johnson Reef and the beginnings of what satellite images show may be an advanced radar facility.

Vietnamese authorities allowed the protest, which also included a wreath-laying ceremony for the fallen soldiers, to last 90 minutes. Such incidents are rare, especially when protesters express sentiments protesting the communist government. Nonetheless, protesters told media they were dismayed at how their soldiers were “long forgotten.”

“I think the government should organize official ceremonies to remember those soldiers who were killed defending Truong Sa and Hoang Sa islands,” one protester, identified as “an 84-year-old retired civil servant,” told Deutsche Welle, using the Vietnamese names for the Spratly and Paracel Islands, respectively. The government does not hold any event to commemorate the incident officially.

The Vietnamese government has done little to challenge China on its claims in the region, but China has noticed the little it has done. In a scathing column published last week, China’s state-run Global Times accused Vietnam of “opportunism” and engaging in “selfish calculations” for attempting to lay claims on Vietnamese territory in the South China Sea. It also described as “petty” a proposal by Vietnam’s Ministry of Education to teach students about conflicts over the Spratly and Paracel Islands, such as the one protesters commemorated on Monday.

China has also been significantly more aggressive in taking territory from Vietnam in the region than from any of the other parties to the dispute: the Philippines, Malaysia, Brunei, and Taiwan. Since 2011, Vietnamese ships have reported multiple incidents of Chinese vessels attacking them, in some cases sinking the ships. All have been civilian ships. In 2011, China allegedly sent a series of ships to attack a Vietnamese research ship in Vietnamese territory, an incident the government called “premeditated.”

Three years later, a Chinese oil rig sank a Vietnamese civilian fishing boat navigating Vietnamese waters. China responded to protests about the incident by warning Vietnam to stay out of its own waters or face more “maritime accidents.”

In 2015, a Chinese ship once again attacked a private Vietnamese fishing boat, this one sailing near the Paracel Islands. The fishermen, who survived the account on lifeboats, testified to watching the Chinese ship deliberately ram into them until their boat sank. The Vietnamese government protested this action, and others like it that year, as “aggressive and brutal.”

Vietnam began the year by deploying Russian-bought submarines to the South China Sea, a sign that the government takes these attacks seriously. As it is a communist country, Vietnam must rely on allies like China for help, while the Philippines has fostered ties with Japan and the United States to strengthen its military presence in the region. The Philippines has also filed a case at the Permanent Court of Arbitration at The Hague to determine the true maritime borders of China, a case that the Chinese government has vowed to disregard no matter the outcome.

An attempt to improve ties between Vietnam and China at the beginning of this month triggered the angry Global Times piece. During their meeting, however, Chinese President Xi Jinping and Vietnamese envoy Nguyen Phu Trong appeared cordial and issued statements of unity to the press. Both agreed on a “comprehensive strategic cooperative partnership,” though the specific meaning of this term was never explained.