The U.S. Naval War College has defended the ardent denunciation of Republican Presidential candidate Donald Trump by its national security professor Dr. Tom Nichols, a self-identified “Never Trump Republican,” arguing that he has the right to do so.

However, as an employee of the U.S. Department of Defense (DoD), he is covered by the Hatch Act, which prohibits government workers from participating in partisan politics.

The U.S. Naval War College is operated by the U.S. taxpayer-funded Department of Defense.

The Hatch Act does apply to Mr. Nichols, but as a less restricted civilian employee, many of the limitations to career civilian and military members do not apply to him.

As we provided before, the opinions you mentioned voiced by Mr. Nichols were in his personal capacity as a citizen, on his own time and were not made using government equipment or while on-duty in a Federal building.

The commander noted that the U.S. military college “endorses the right of our faculty to Academic Freedom.”

Nevertheless, the school also acknowledged that, when voicing his opinions, Nichols is required to “issue explicit disclaimers” that he is not speaking on behalf of the U.S. Government, DoD, the Department of the Navy or the Naval War College, something he failed to do so in a scathing article written for The New York Times Magazine, titled Never-Trump Confidential. 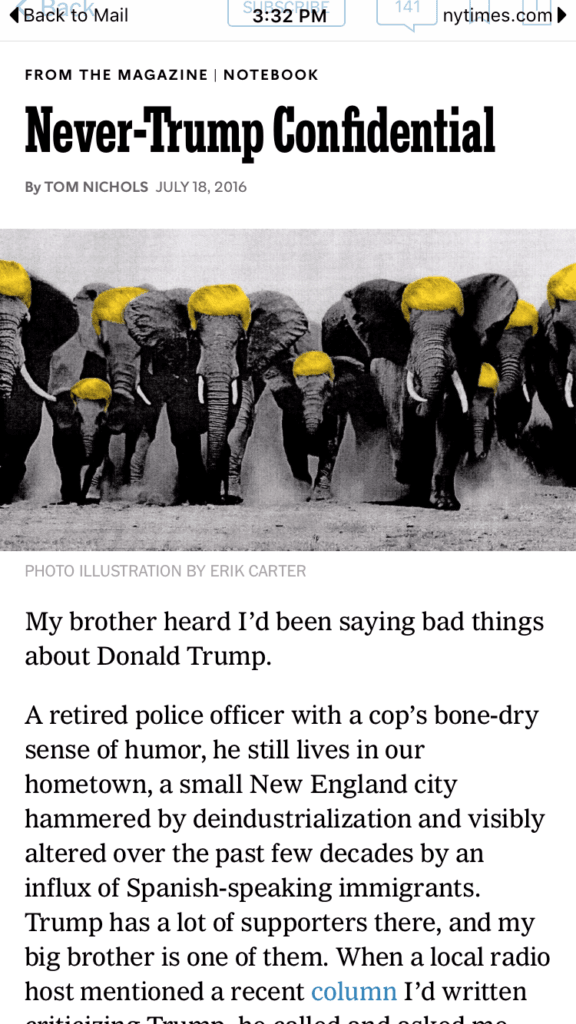 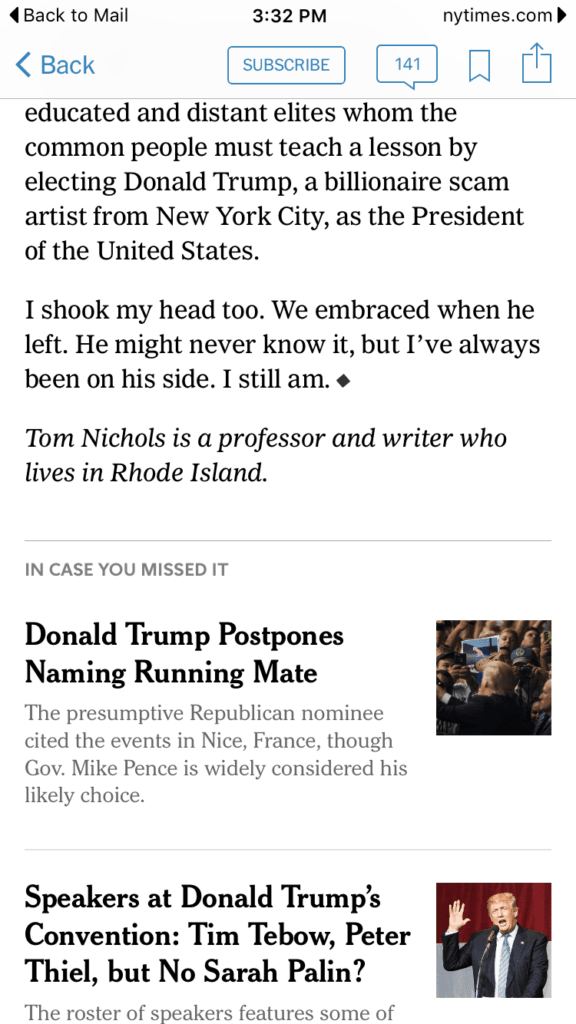 Yet, the U.S. Naval War College has decided not to discipline Nichols in any way.

Without the required note that the expressed opinions are his own, he wrote:

Trump’s victory, if unchallenged from the right, would force conservatives to replace their own principles with his rancid stew of racism and sexism, along with his slew of various crackpot theories on politics and economics. If he wins, conservatism could be dead for a generation, if not longer.

In that piece he is not identified with the Naval War College, only as a professor. Our faculty are instructed to provide media with the appropriate disclaimers when they agree to the interviews.

Earlier, when asked if it was appropriate for Nichols to publicly condemn Trump via social media and news outlets as a professor at the college, Mertz clearly indicated that such articles would require a disclaimer even when he did not explicitly identify himself as being linked to the U.S. Naval War College.

The opinions you mentioned voiced by Mr. Nichols were in his personal capacity as a citizen, on his own time and were not made using DoD resources and he does have the appropriate disclaimers on his social media accounts that the views were his own.

That said, the Naval War College, where there is a rich diversity of views and opinions, endorses the right of our faculty to Academic Freedom. Our faculty, when they speak or write as citizens should be free from any institutional censorship or discipline. We encourage our faculty members to write, make presentations and give interviews in any forum. But when expressing their opinions as private citizens and not on Naval War College time, they must issue explicit disclaimers that they do not speak for the U.S. Government, the Department of Defense (DoD), the Department of the Navy or the Naval War College.

Nichols has not held back any punches when condemning the Republican presidential nominee.

“To use the precise political science terminology, that will go down as one of the most deeply fucked up speeches in US history.”

To use the precise political science terminology, that will go down as one of the most deeply fucked up speeches in US history. #RNCinCLE

He has suggested that Republicans should vote for the Democratic presidential nominee Hillary Clinton. Nichols has written at least 11 articles berating Trump, ranging from “Trump’s Foreign Policy Speech Was Gobbledygook” to “I’ll Take Hillary Clinton Over Donald Trump.”

The U.S. Naval War College argues that he wrote all of them as a “private citizen” and not on the school’s time.

As noted by the Independent Journal, Nichols, a senior contributor at The Federalist and five-time “Jeopardy!” winner, has ranted about his #NeverTrump position on Twitter.

I am 55 and lived through LBJ, Nixon’s resignation, Carter, two Clinton terms and two Obama terms. I can survive four years of Hillary. /1

What I do not think the country or the conservative movement can survive is someone who makes George Wallace look like Churchill. /2

So, you can keep going on about SCOTUS and Emailgate and Bill, and it’s all true. I detest Hillary too. But all of that can be fought. /3

Clinton falls on the most awful side of normal. Trump is an ignorant, disturbed rich man playing with the Constitution. /4

And if Trump gets his way, he’ll prove that being rich enough, crazy enough, and offensive enough can snuff out a democratic contest. /5

But I won’t. I will give Clinton those SCOTUS picks, suck it up on the emails, and forget the 1990s. Because I have to. Because of Trump. /7

Also, a President’s first job, the one only he can do, is to be Commander-in-Chief. Trump is too mentally unstable to be allowed there. /8

Everything else — *everything*, including your gun fears, your SCOTUS fears, everything — is secondary to this one issue. /9

You all think it’s hilarious a gay British kid is running around calling a POTUS nominee “Daddy.” Now think about that for a moment. /10

If elected, “Daddy” will not build a wall or kick out brown people. But he will control arms that can destroy the planet in 30 minutes. /11

He’s proven repeatedly he’s an ignorant, racist demagogue. But to feel better about your own crappy lives, you’ll hand him 4000 nukes. /12

And while you all whine about SCOTUS, you’re supporting a man whose chief adviser was a Ukrainian dictator’s PR guy. You idiots. /13

And in the meantime, I’ll try like hell either to change yours, or to shame you for your irresponsibility. /15

Trump is an existential menace to our system of government. So if #NeverTrump means accepting Hillary’s win, so be it. /16x