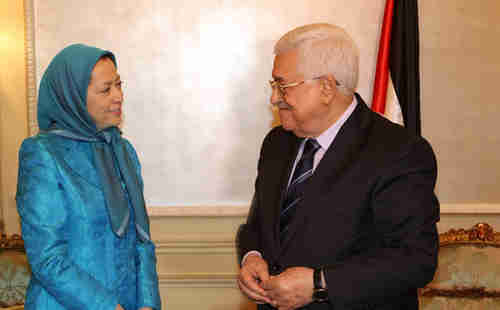 On Saturday, Palestinian Authority president Mahmoud Abbas met in Paris with Maryam Rajavi, leader of the National Council of Resistance to Iran (NCRI).

President Mahmoud Abbas, at the meeting, reiterated the need to combat fundamentalism and terrorism in the region and informed Mrs. Rajavi of the latest developments in the Middle East, in particular regarding Palestine and France’s initiative.

Mrs. Rajavi expressed gratitude for the solidarity of the Palestinian resistance and its leader with the Iranian people and Resistance. She congratulated the Palestinian government on its victories and expressed hope that the goal of the Palestinian people would be achieved. She reiterated that the Iranian regime is the main instigator of sectarian discord, fundamentalism and terrorism in the entire region, in particular in Iraq, Syria, Lebanon, Yemen, and Palestine, but she added that today the mullahs’ regime is at its weakest and most fragile and vulnerable state. …

Supporting terrorists instead of fighting them, not only does not lead to the liberation of Quds [Jerusalem] and weakening the Zionist regime, but also makes the Palestinian nation regret.

Another Iranian official said that Abbas was collaborating with the CIA, which is common fare these days in countries that massacre their own people. According to an advisor to Iran’s foreign ministry:

That man [Abbas] is known to us and documents from the US Embassy in Tehran revealed that he has been a collaborator with the Central Intelligence Agency for a long time and his actions in the past decades have proved that.

Mkhaimar Abusada, a university professor in the Gaza Strip, says that this is all about money:

The Palestinian Authority has made a decision to align itself with the so-called moderate Sunni Arab governments and in the meantime distance itself from Iran and the Shiite camp in the region, because it does not want to lose political and financial support of [the former]. That’s why the PA and President Mahmoud Abbas met with the Iranian opposition leader.

Abusada is correct. This really is all about the money.

As I’ve written a number of times in the past, the top leadership in Iran, led by Supreme Leader Ayatollah Seyed Ali Khamenei, are almost completely delusional in many ways.

First, they can’t seem to grasp that the younger post-Revolution generations are pro-Western. This was apparent in the early 2000s when young college students were holding massive pro-Western demonstration. Iran’s security police bashed, tortured and killed many college students for those protests, but they didn’t change opinions. Today, that generation is now 30-40 years old, in positions of power, ready to take over when the old geezer mullahs like Khamenei are gone.

That whole arrangement has been falling apart anyway. When Syria’s president Bashar al-Assad in 2011 started conducting extermination campaigns on Sunni civilians, including Palestinians living in refugee camps in Syria, the previous close relationship between Hamas and al-Assad was dissolved. And since Iran is supporting al-Assad, there was a big strain on the relationship between Palestinians and Iran.

This game has been going on for five years now, with Iranians paying off the Palestinians like a man might give money and presents to a mistress who treats him with contempt, but she still takes the money.

But this meeting between Rajavi and Abbas may have been a step too far, and may even cause a permanent split between the PA and Iran. This has to come sooner or later, because there is going to be a war between Saudi Arabia and Iran, and when the Sunni Palestinians are forced to choose between the two, the Palestinians will be on the side of Saudi Arabia.

It seems that every few days I get a fresh opportunity to point this out: Years ago I wrote, based on a Generational Dynamics analysis, that in the coming Clash of Civilizations world war, China, Pakistan, and the Sunni Muslim countries will be on one side, and India, Iran, the United States and the West will be on the other side. This meeting between Rajavi and Abbas, and the furious reaction from Iran, is yet another event that moves the world along the predicted trend line. Iran News Update (anti-Iran) and Mehr News (Tehran) and Jerusalem Post

Much of Iran’s fury at Maryam Rajavi is that she and her husband Massoud are long-time leaders of the terrorist organization Mujahedin-e Khalq Organization (MEK or MKO).

MKO was formed in the 1960s in opposition to the government of the Shah of Iran, who was America’s ally. MEK was extremely violent, with an ideology that mixed Islamism and Marxism. It conducted numerous terrorist murders of both Iranian government officials and American officials and military in Iran.

MEK supported Iran’s Great Islamic Revolution in 1979, helping to replace the Shah with the government of Ayatollah Rouhollah Khomeini. However, MEK leaders quickly discovered that the Khomeini was actually worse than the Shah’s government. In 1981, MEK launched a bombing campaign that killed Iran’s president and prime minister. Then, its leadership fled to Europe.

The MEK sided with Iraq in the Iran/Iraq war of the 1980s, and helped Saddam Hussein defeat the Kurds as well as the Iranians. Saddam set up an enclave of Iranian MEK supporters in refugee camps in Iraq.

Iran has frequently attacked the MEK refugee camps in Iraq with missiles, and still consider the MEK, and its leaders Massoud and Maryam Rajavi, to be terrorists. Global Security and Tehran Times

If you pay attention to the Pollyannaish mainstream financial media, then you constantly get the picture that the economy is wonderful, and investments will only keep growing. For example, even when the financial crisis occurred in 2007-2010 – and millions of people lost their jobs, went bankrupt and lost their homes – the message was always the same that all losses were in the past.

What’s surprising these days is that the mainstream financial media are increasingly airing opinions that something is seriously wrong, and that there is a possible financial crisis in the offing. That has been particularly true since the end of 2015, when global sovereign bond yields started dropping like a stone.

Translation: Every country funds its treasury in several ways, and one way is to borrow money from investors by issuing “sovereign bonds.” In “normal” times, investors can typically earn 2-10% interest (yield) per year on these bonds, depending on the country and the length of time before the bond will be redeemed. These sovereign bonds are considered to be the gold standard of risk-free investments, since it is believed and expected that every country will honor its obligations and redeem the bonds when they expire, paying their face value, plus the money earned as interest. However, with the recent arrival of negative yields, the country will pay the investor LESS money than the invested in the first place. So, for example, you pay $1,000 for one of these bonds that expires in two years, and two years later the country redeems it for just $990, and you’ve paid $10 in negative yield.

The chart above shows that sovereign bond yields have been crashing since November of last year. This is becoming increasingly alarming to many investors.

Sovereign bond yields at record lows aren’t worth the risk and are therefore not top of my shopping list right now; it’s too risky. Low yields mean bonds are especially vulnerable because a small increase can bring a large decline in price.

This was supported by a release from Fitch Ratings:

This year’s dramatic fall in yields on bonds issued by investment grade sovereigns has again raised the risk that a sudden interest rate rise could impose large market losses on fixed-income investors around the world, Fitch Ratings says. A hypothetical rapid reversion of rates to 2011 levels for $37.7 trillion worth of investment-grade sovereign bonds could drive market losses of as much as $3.8 trillion, according to our analysis.

Most people look at the stock market, and think that everything is rosy, but there’s a lot going on that is not reflected in the stock market. In 2007, it was the collapse of the real estate bubble and, more importantly, the disastrous collapse of collateralized debt obligations (CDOs) backed by subprime mortgages. The disaster had already occurred before the stock market started falling.

Bloomberg columnist Lisa Abramowicz on TV on Wednesday commented on the warnings from Bill Gross and Fitch (my transcription):

There’s a high level of concern about how sustainable all of this is – when profits are declining, when you have growth slowing, when you have stimulus efforts that are not working and that are running out of steam — how long can this last? But at the same time, it’s very hard to see what could reverse it. The only thing that people possibly can point to is inflation, or if some country decides not to pay back their debt, or just forgive it, or come up with some kind of engineering that creates a technical problem.

As I’ve been writing for years, inflation or hyperinflation is not going to happen because the velocity of money keeps plummeting. ( “11-Mar-16 World View — In desperation move, European Central Bank further lowers negative interest rates”)

According to Abramowitz’s contacts, the only thing that can stop the current plunge in bond yields is for some country to decide not to pay back their debt — essentially to declare sovereign bankruptcy. In other words, there’s a major financial crisis coming no matter what. Bloomberg and Fitch Ratings