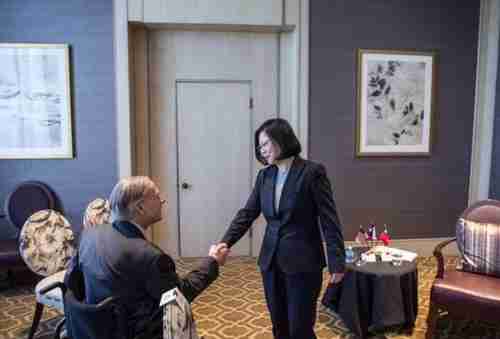 Ignoring demands that the U.S. forbid Taiwan’s president Tsai Ing-wen from making “transit stops” in Houston and San Francisco en route to and from meetings with Central American leaders, Tsai met with both U.S. Senator Ted Cruz and Texas Governor Greg Abbott during a stopover in Houston.

China’s foreign ministry spokesman made this statement about the visit:

I have taken note of relevant reports. I want to reiterate that we are firmly opposed to the Taiwan leader’s contact with any US officials in any form and engagement in actions that disrupt and undermine China-US relations during the so-called transit. We once again urge relevant people from the US to abide by the one-China policy and the principles of the three Joint Communiqués, and cautiously handle Taiwan-related issues so as not to harm the overall interests of China-US relations and peace and stability across the Taiwan Straits.

As I’ve said before, it really amazes me that the US is supposed to bow to demands from China not to speak to or meet with people that China tells us not to speak to or meet with, and yet we’re supposed to accept without question China’s right to build military bases in the South China Sea, in clear violation of international law as decided by the United Nations Permanent Court of Arbitration (PCA) in the Hague in July of last year, while annexing other countries’ territories as Hitler did just prior to World War II.

Prior to the meeting, China’s Consul General Li Qiangmin of Houston sent a letter to Cruz:

For U.S. leaders in administration and legislature, not to make any contact with Taiwan leaders nor send any implication of support of ‘Taiwan Independence’ are in the interests of China, the U.S. and the international community. So, dear Senator, I sincerely hope that you will neither meet, nor have any contact with Tsai during her upcoming visit to Houston, and continue to play a significant role in promoting mutual understanding and friendship between the two peoples of China and the U.S.

After the meeting, Cruz issued a statement saying the US doesn’t dictate to China whom its leaders can meet with, and China should not dictate to the US:

Shortly before our meeting, the Houston congressional delegation received a curious letter from the Chinese consulate asking members of Congress not to meet with President Tsai, and to uphold the ‘One-China policy’.

The People’s Republic of China needs to understand that in America we make decisions about meeting with visitors for ourselves. This is not about the PRC. This is about the U.S. relationship with Taiwan, an ally we are legally bound to defend. The Chinese do not give us veto power over those with whom they meet. We will continue to meet with anyone, including the Taiwanese, as we see fit.

The US-Taiwan relationship is not on the negotiating table. It is bound in statute and founded on common interests. I look forward to working with President Tsai to strengthen our partnership.

Governor Abbott said, “It was an honor to meet with President Tsai and discuss how our two economies can expand upon our already prosperous trade partnership.” Houston Press and China’s Foreign Ministry

The “One-China Policy” states that there is one China, not two, but leaves ambiguous exactly what that means. Beijing interprets it to mean that Taiwan is province of China, to be completely governed one day by Beijing. Taiwan interprets it to mean that they are the official government of all of China. By not speaking these interpretations out loud, everyone is supposed to get along by saying “there is only one China.”

China’s politicians have made it clear that they will use military force against Taiwan and the United States if there is any threat that Taiwan will declare independence. In 2005, Beijing passed an “anti-secession law” requiring China to take military action even if Taiwan’s leadership simply makes plans or gives speeches about independence. President Tsai has refused to confirm the “1992 consensus” which is the vehicle that reaffirms the One-China policy.

Under these circumstances, it’s not surprising that China is becoming increasingly belligerent towards Taiwan. Arguably, Taiwan has already met the conditions set forth in the anti-secession law.

The reaction from China’s Foreign Ministry, quoted above, states China policy, but is fairly non-belligerent. However, an editorial in the state run Global Times promises revenge if Donald Trump abandons the one-China policy after taking office:

The US passed bills that allow serving officers to visit Taiwan, while Chinese fighter jets patrolled around Taiwan and China’s aircraft carrier passed the island. It is widely expected that the mainland will impose further military pressure. Tsai needs to face the consequences for every provocative step she takes.

Trump is yet to be inaugurated, and there is no need for Beijing to sacrifice bilateral ties for the sake of Taiwan. But in case he tears up the one-China policy after taking office, the mainland is fully prepared. Beijing would rather break ties with the US if necessary. We would like to see whether US voters will support their president to ruin Sino-US relations and destabilize the entire Asia-Pacific region.

Beijing does not need to feel grateful to Trump for not meeting Tsai. The one-China policy is the basic principle reiterated in the three Sino-US joint Communiqués. It is also the foundation of the profound bilateral relationship. Sticking to this principle is not a capricious request by China upon US presidents, but an obligation of US presidents to maintain China-US relations and respect the existing order of the Asia-Pacific. If Trump reneges on the one-China policy after taking office, the Chinese people will demand the government to take revenge. There is no room for bargaining.

This article threatens to break relations with the US if Trump does not reaffirm the one-China policy, and hints at unspecified military action against Taiwan.

But completely apart from anything the US administration does, it is the attitude of the Taiwanese people that is most important. Time is not on China’s side, and Chinese officials know it, as the Taiwan’s population become more pro-independence every year. The Chinese people are highly nationalistic with regard to Taiwan, and it won’t be too much longer before Chinese officials decide that time has run out. Global Times (Beijing) and Xinhua