Over 100 migrants drown in Mediterranean after their dinghy sinks 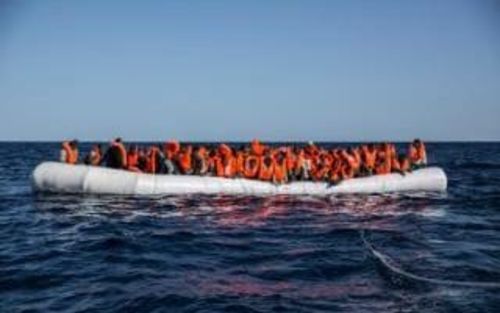 Migrants in a dinghy rescued on Thursday of last week (AP)

Italy’s Coast Guard was able to rescue only four people after a rubber dinghy with 110 migrants sank in rough waters in the Mediterranean Sea about 30 miles off the coast of Libya.

These situations are brought about by people smugglers. They charge desperate migrants thousands of dollars each. Typically, the people smugglers put hundreds of migrants into a single large rubber dinghy, and give the migrants enough fuel to leave Libyan waters and a cell phone to use to call the Italian coast guard.

It is expected (or feared) that, like last year, hundreds of thousands of migrants will attempt to cross from Libya to Italy this year. According to Malta Prime Minister Joseph Muscat:

Come next spring, the number of people crossing over the Mediterranean will reach record levels. The choice is trying to do something now, or meeting urgently in April, May … and try to do a deal then.

It is also expected that there will be thousands of migrants departing from Egypt, with the same objective. Libya Herald and Reuters and Telegraph (London) and AP

With Libya in chaos, migrant deal with Italy collapses

Italy reopened its embassy in Libya’s capital city Tripoli last week, the first Western country to do so since 2015. Italy had hoped that doing so would lead to an agreement with the government of Libya to slow the flow of migrants trying to cross the Mediterranean Sea to Italy.

None of these three governments recognizes either of the others, and so there is no hope of getting any agreement.

An Italian military vessel loaded with soldiers and ammunition has entered Libyan territorial waters. It is a clear violation of the UN charter and a form of repeated aggression.

One other government could be mentioned — the so-called National Salvation Government, led by Khalifa Ghwell, who claimed several days ago that his forces had seized several ministries in Tripoli, and that the Government of National Accord (GNA) had been defeated. His claims could not be confirmed. VOA and Libya Herald and North Africa Post and Libya Herald