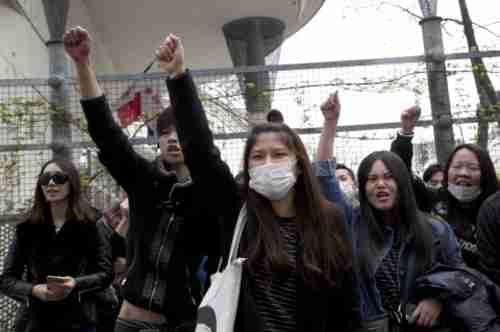 A 56-year-old Chinese man, Shaoyo Liu, was shot to death by police during a raid on his apartment on Sunday.

Two policemen from the “anti-crime brigade” (BAC) came to the apartment in response to reports of a “family dispute.” According to the police, Liu ran to one of the policemen carrying a pair of scissors and stabbed one of them in the chest. He was saved only because he was wearing a bulletproof vest. At that point, the other policeman shot him, leading to his death minutes later.

Liu was the father of five children. His family disputes the police version of the story and says that Liu came to the door carrying scissors because he had been using them to prepare fish for dinner, but did not stab anyone. According to one of Liu’s daughters in tears:

About eight o’clock, my little sister heard knocking at the door. She looked at the hole in the door and saw two men and an armed woman. My father came to the door with the scissors he had to take care of the fish he was cooking. The blows at the door became stronger and stronger. I shouted ‘Calm down,’ make less noise, but nothing made it. They smashed the door, the shot was gone and my father found himself on the ground.

On Monday evening 200 members of the Asian community gathered in front of the police station to protest the killing. The protest began peacefully, but then individuals broke the window of a police car and threw an incendiary device inside, creating a fire that burned the vehicle out. 35 people were arrested.

On Tuesday evening, hundreds of protesters returned to the police station to demonstrate, chanting “police assassin,” “police murderer” or “injustice, injustice.” The crowd turned violent, and the police fired teargas to disperse them.

According to one protester, “There are two versions, that of the police which speaks of self-defense and that of the family which says that it is a crime. What is happening, there is no reason to believe the police.”

French-Chinese xenophobia appears to be growing in Paris

The incident has sparked a diplomatic row with Beijing. On Tuesday, the Chinese Foreign Ministry summoned a French diplomat and urged the French authorities to investigate the killing thoroughly and to ensure the safety of Chinese nationals on French soil.

In 2008, in the lead-up to the Olympics games held in China, the Olympic torch was being carried through Europe by Jin Jing, a pretty 27-year-old girl from Shanghai confined to a wheelchair, part of China’s national wheelchair fencing team. As I wrote in 2008, anti-Chinese xenophobia was extremely high, as there were intense protests in London and Paris against allowing Jin Jing to carry the torch in Europe. British politician Lord Sebastian Coe, himself a former Olympic athlete, condemned the army of Chinese “thugs” accompanying Jin Jing, referring to the security personnel protecting her. An article in the German magazine Der Spiegel referred to the Chinese with the headline, “There’s no way people like that should be allowed on our streets.” In Paris, on April 7, a Tibetan separatist attacked Jin Jing as she was carrying the torch down a Paris street.

There are about 392,700 Chinese in England and Wales, and about 600,000 in France, which has the largest Chinese population in Europe. Chinese people in Europe claim that racism against Chinese is widespread and that complaints to the police about physical and verbal abuse are ignored. According to a poll, there is a general belief in the Chinese community that reporting crime is futile, and half the people say that they do not trust the police.

This past weekend was the celebration of the 60th anniversary of the Treaty of Rome that formed the basis for the European Union. In 1957, the traumatized leaders of the day had suffered through two world wars in Europe and were determined to form a new unified Europe that would guarantee that no such war would occur again. Few people are missing the irony that Britain was missing for the weekend’s celebration of the Treaty of Rome, since Britain, one of the original signers, is leaving the EU because of the Brexit vote.

Nationalism and xenophobia are extremely dangerous, but as the survivors of the previous generational crisis war die off, the younger generations have no fear of nationalism and xenophobia, and they begin to increase again, eventually leading to a new generational crisis war. I have documented numerous examples in country after country of the rise of xenophobia and nationalism in the current generational Crisis era — the rise of xenophobia and nationalism. This has happened in China vs Japan, China vs Vietnam, India vs Pakistan, Europe vis-à-vis the Muslims and the Roma, and America vis-à-vis the Muslims and the Mexicans. These attitudes cannot be stopped. They come from masses of people, not from the leaders, whose job becomes to deal with these populist attitudes in a way that does the least amount of damage.

Still, the anti-Chinese riots are part of a global trend that cannot be stopped, and it will take another world war for people to learn how dangerous nationalism and xenophobia can be. Daily Mail (London – 8-Apr-2008) and BBC (1-Jun-2015) and Global Times (Beijing) and Washington Post