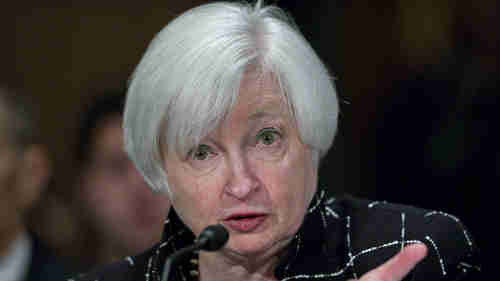 Janet Yellen, the Chairman of the Federal Reserve Board, the successor to Ben Bernanke and Alan Greenspan, held a press conference on Tuesday of last week, during which she said that she believes that there will be no new financial crisis “in our lifetimes”:

Would I say there will never, ever be another financial crisis?

You know probably that would be going too far but I do think we’re much safer and I hope that it will not be in our lifetimes and I don’t believe it will be.

Yellen said that the reason she believes that there will not be a financial crisis “in our lifetimes” is because the Fed is much more clever and vigilant now about detecting risks, having learned lessons from the last financial crisis:

After the financial crisis, those who see the damage in that type of thinking have played a major role in ensuring that we have a more appropriate system of supervision and regulation, hopefully for a good long time.

This is such a bizarre, naïve statement, that it is hard to know what to make of it. Yellen is expressing precisely the attitude that is always been prevalent prior to every financial crisis in world history. Politicians say “This time it’s different,” and “We’ve learned our lessons,” and “It can’t happen this time.” And it does not happen this time until it does.

Actually, the lessons from the last financial crisis have not been learned at all. The Fed and central banks around the world have been “printing” hundreds of trillions of dollars, and governments around the world have been borrowing that money and going into new debt at an exponentially increasing rate. We have recently been reporting that it is too late for Illinois and Puerto Rico, which have gone into so much debt there is literally no hope of every paying it off.

This is true all around the world. According to a new report by the Institute of International Finance, global debt has reached $217 trillion in the first quarter of this year, and that’s 327% of gross domestic product for the whole world.

China, in particular, poses an enormous risk. China’s total debt surpassed 304% of GDP as of May 2017, according to the IIF.

Janet Yellen apparently believes that all this is no problem, that if a problem does arise, then the Fed or some other central bank can just print another trillion dollars in free money and use it to patch up the problem. So we have nothing to worry about.

Reuters and CNBC and CNBC

I started paying attention to the Fed in 2002, after seeing a huge graph of the Dow Jones Industrial Average (DJIA) from 1920 to the present in the Boston Globe. I took one look at the graph and could see that it was perfectly obvious that we were in a stock market bubble. Later, of course, I did the calculations and verified it.

There are many reasons why I believe that mainstream economists are airheads, and one of them is the belief that you cannot detect a bubble until after it occurs. In the case of the DJIA, it is rather simple. If you analyze historical values of the DJIA, you find that in the 90-year period from 1904 to 1994 it grew at an average of 4.5% per year, including inflation. So since the DJIA started growing much more rapidly than 4.5% per year, starting in 1995, then you know that it is in a growing bubble. Today, the DJIA is at 258% of its long-term trend value, as determined by the 4.5% growth rate, so we can be sure that the DJIA is in an enormous bubble. In fact, it was at 255% of the trend value when the crash began in 1929, and fell to only 24% of the trend value by 1932, after several years of crashing.

Another thing that mainstream economists are incapable of grasping is the concept of “Reversion of the Mean.” This means that the average (or mean) of a value must be the same in the future as it was in the past.

This is easiest to explain with the S&P 500 Price Earnings ratio (p/e ratio). The historic average value of the p/e ratio is 14, but since the 1990s, it has been well above the average, and today it’s around 24.

Now, airhead economists use the erroneous phrase “Reversion TO the Mean,” and they say you should be prepared for the p/e ratio to revert to its mean value of 14. This would be a significant stock market correction, but it is only a small part of the story.

If the p/e ratio only reverts to 14, then that means for the last 20 years, the average (or mean) value was well above 14. That doesn’t satisfy the requirement that the average before 1995 was 14, and so after 1995 it also has to be 14. That’s why we say “Reversion OF the Mean,” which says that the average value must return to 14, which means that the p/e ratio would have to fall to around 5 for 20 years, just as it was well above 14 for the last 20 years. This portends major stock market crash.

The members of the Federal Reserve are some of the major economists of our time, each with huge staffs to do research. And yet, Janet Yellen says that the Fed has everything under control, and there won’t be a financial crisis “in our lifetimes.” It’s just absolutely bizarre.

The bizarre statement by current Fed Chairman Janet Yellen is inciting feelings of nostalgia in me to remember the days of her predecessors. Since I started writing Generational Dynamics analyses in 2003, there have been two prior Fed chairmen, Alan Greenspan and Ben Bernanke. Let’s start with Greenspan.

Another reason why I consider mainstream economists, or at least mainstream economics journalists and analysts, to be airheads is because of how they covered the Alan Greenspan years at the Fed. Throughout the early 2000s, they would make a “Greenspeak” or “Fed speak” joke that when Greenspan gave a speech or statement he could not be understood because he used convoluted language. So the so-called economics experts would say that they simply could not understand what Greenspan was saying. That whole excuse was totally ridiculous. I did not understand what he was saying all the time either, but then I would go to the Federal Reserve website and read the transcript of his speech. After reading it three or four times, even the convoluted language made sense. So I formed the opinion that any economics journalist or economist who said that he could not understand Greenspan because of convoluted language was an airhead – and there were a lot of people like that.

So I was carefully following Greenspan during 2003, 2004, and 2005 to see what he thought of the growing stock market and housing bubbles. All my articles are on my website, but to summarize: Early in 2004, he said there were no bubbles. In August 2004, he said that there was a housing bubble, but that it was a good thing, because homeowners could mortgage their homes, borrowing money on their homes, and have extra money to spend. In November 2004, he had a front-page interview with the Wall Street Journal admitting that he had known since 1996 that there was a stock market bubble, but decided to ignore it, and deal with it when it began to grow. Early in 2005, he completely reversed himself, and repudiated his earlier reasoning, saying that the bubble was growing. By the end of 2005, and his tenure as Fed president, Greenspan was saying that high asset prices were becoming very dangerous, and that ” history has not dealt kindly with the aftermath of protracted periods of low risk premiums.”

My website was pretty much the only place in the world where you could read this description of Greenspan’s change of mind, as it was going on. You would think it would be big news when Greenspan repudiated his own reasoning early in 2005, but there was not a word in the mainstream media, apparently because the airheads at the Wall Street Journal and CNBC were too dumb to understand his “convoluted language.”

The other amazing thing is that Greenspan himself is apparently too embarrassed to admit that he predicted the housing bubble. He clearly discussed it in his speeches in 2005-5, but never referred to those speeches later. Apparently, he was afraid that if he admitted that he knew what was going on, then he would be blamed for it.

To me, Greenspan’s story is one of the most amazing of the 2000s decade.

Alan Greenspan was born in 1926, and lived through the Great Depression, so when he became alarmed in 2005, it must have been because he recognized all the signs of impending disaster from his childhood.

Ben S. Bernanke was born in 1953 and grew up during the 1950s, when America had already defeated the Great Depression and defeated the Nazis, and no goal was out of reach. He was in college in the 1970s when high inflation was the major problem, so naturally, inflation was his greatest concern as Fed Chairman.

As I described in my 2005 article, “Ben S. Bernanke: The man without agony”, Bernanke was a complete contrast to Greenspan. Bernanke did not believe in bubbles. He believed that the 1930s Great Depression was CAUSED by the Fed – which could have poured some money into the economy and prevented the Great Depression completely.

Ben Bernanke’s story is not yet completely over. In 2008, during the financial crisis, his policy was to “print” as much money as he thought necessary, and pour it into the banking system. He did that, and central banks around the world followed him and did the same.

That is why global debt has reached $217 trillion in the first quarter of this year, and that is 327% of gross domestic product for the whole world. The current Fed chairman Janet Yellen says that the Fed has this all figured out. If some segment of the world economy starts crashing, threatening a chain reaction that will cause a catastrophic global financial crisis, Yellen and the other central bankers will just print money and stop the chain reaction. So we have nothing to worry about.