India reinforces its military in preparation for war 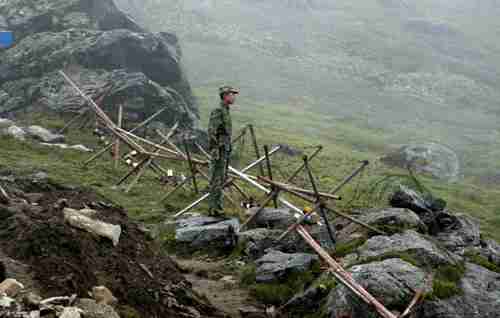 Chinese soldier stands guard on the Chinese side of the border crossing between India and China. (AFP)

India’s military have raised the alert level in the region surrounding the Doklam Plateau, along the Line of Actual Control (LAC) the forms the border between India and China.

For almost two months, China and India have each had 300 soldiers just 100 meters apart on the plateau, 3,000 meters above sea level. India is not increasing its troop strength on the plateau itself, but is bringing troops into bases nearby, and is raising the alert level in preparation for war.

The border dispute involving China, India, and Bhutan over the Doklam Plateau continues to be unresolved and, in fact, appears to be escalating. As we have been reporting, a standoff between India’s army and China’s army on Doklam plateau in the tiny country of Bhutan. China is attempting to annex the region, and on June 16 sent Chinese troops and construction workers to begin road construction. Bhutan troops tried to prevent the Chinese troop incursion, but they were overrun. India sent in its own troops, saying that it did so when Bhutan invoked a treaty with India and asked for help, resulting in a standoff.

No bullets have been fired yet but, as we recently reported, China appears to have set an August 19 deadline for India to withdraw its troops from the Doklam Plateau.

Even if August 19 passes with no military action, there’s another hard deadline: The Communist People’s Congress in Beijing in November. If the standoff has not been resolved in time for that meeting, it could be a major humiliation for China’s president Xi Jinping.

In addition to setting deadlines, China has been using every possible form of psychological warfare on India to try to force them to withdraw their soldiers, and allow the Chinese military to invade and annex Doklam Plateau. Some of the techniques used by China include the following:

India has moved its army to a state of “no war, no peace,” which is an alert state where soldiers take up positions that are earmarked for them in the event of a war. Reuters and Indian Express and India Times and Financial Express and International Business Times (India)

Bhutan makes it clear to China that its ally is India

From the beginning of this crisis, China’s media have insisted that Bhutan and China have no dispute, implying that the two countries agree that the Doklam Plateau belongs to China, not Bhutan.

Furthermore, China’s media have insisted that Bhutan did not want India’s intervention and that Indian troops had entered the region in order to gain control of Bhutan.

Bhutan has, in fact, tried to avoid inflaming the situation, and has said little, hoping that India and China find a peaceful resolution.

However, on Thursday, the government of Bhutan issued a statement made its position very clear:

Our position on the border issue of Doklam is very clear. Please refer to our statement which has been published on the web site of Bhutan’s Foreign Ministry on June 29, 2017.

The referenced June 29 statement is as follows:

In view of the many queries raised recently in the media regarding the Bhutan – China boundary in the Doklam area the Ministry of Foreign Affairs would like to convey the following:

On 16th June 2017, the Chinese Army started constructing a motorable road from Dokola in the Doklam area towards the Bhutan Army camp at Zompelri. Boundary talks are ongoing between Bhutan and China and we have written agreements of 1988 and 1998 stating that the two sides agree to maintain peace and tranquility in their border areas pending a final settlement on the boundary question, and to maintain status quo on the boundary as before March 1959. The agreements also state that the two sides will refrain from taking unilateral action, or use of force, to change the status quo of the boundary.

Bhutan has conveyed to the Chinese side, both on the ground and through the diplomatic channel, that the construction of the road inside Bhutanese territory is a direct violation of the agreements and affects the process of demarcating the boundary between our two countries. Bhutan hopes that the status quo in the Doklam area will be maintained as before 16 June 2017.

Once again, we have a situation where China’s claims are simply lies. As usual, we have to point out that China has lied repeatedly and continuously about its claims and criminal activities in the South China Sea, and so there is no reason to believe any claims they make about Bhutan’s territory on the Doklam Plateau.

As we have said before, China is a highly militarized international criminal state, but at some point, they will go one step too far, and bring an enormous catastrophe on themselves and the world. India Times (8-Aug) and Kashmir Monitor and Bhutan Foreign Ministry

SCMP: China and India on brink of war that could spread to the Indian Ocean

Among Chinese media publications, we often quote China Daily and Global Times. Both are strictly controlled by the Chinese Communist Party, though Global Times is far more nationalistic.

The Hong-Kong based South China Morning Post (SCMP) is a bit more independent than the other two. That is not to say that they would directly confront and contradict Beijing policy – if they did, Beijing would probably have the editors abducted, thrown into a pit and tortured. But they are able to print analyses that are a bit more balanced than the pure propaganda of the other two.

According to an SCMP analysis, both China and India are preparing for an armed conflict in the event that negotiations fail.

The PLA [People’s Liberation Army] will not seek to fight a ground war with Indian troops early on. Instead it will deploy aircraft and strategic missiles to paralyse Indian mountain divisions stationed in the Himalayas on the border with China. [Indian troops will probably hold out for] no more than a week.

Chinese military sources believe that any conflict will be controlled, and not spill over into other disputed areas, of which there are currently three along the 2,000 km border.

However, an Indian defense expert, says that a conflict will not be limited, and could extend into the Indian Ocean.

China is vulnerable in the maritime area, because China is heavily reliant on imported fuel and, according to figures published by state media, more than 80 per cent of its oil imports travel via the Indian Ocean or Strait of Malacca.

Any Chinese military adventurism will get a fitting reply from the Indian military.

Certainly, it will be detrimental for both, but if Beijing escalates [the conflict], it will not be limited. Perhaps, it may extend to the maritime domain as well.

If China engages in a military offensive against India, New Delhi will take all necessary measures … [and will] respond to Chinese actions in its own way. Why only a border war? It could escalate to a full-scale India-China war.