WASHINGTON, DC – During a congressional briefing on Capitol Hill on Thursday titled “Iran Regime’s Threats and Rights Violations: Policy Options,” Republican and Democrat congressmen and congresswomen gathered to express their commitment to supporting the people of Iran in their quest to achieve a free Iran.

Rep. Ileana Ros-Lehtinen (R-FL), who sits on the House Foreign Affairs Committee, said President Trump’s decision to “hopefully” decertify the Iran nuclear deal would present the United States with an opportunity to “press the European Union to hold Iran accountable for its illicit activity and to make them comply with the international norms” and “to tell our EU partners sanction Iran. Designate Iranian entities as the terrorist groups that they are”: 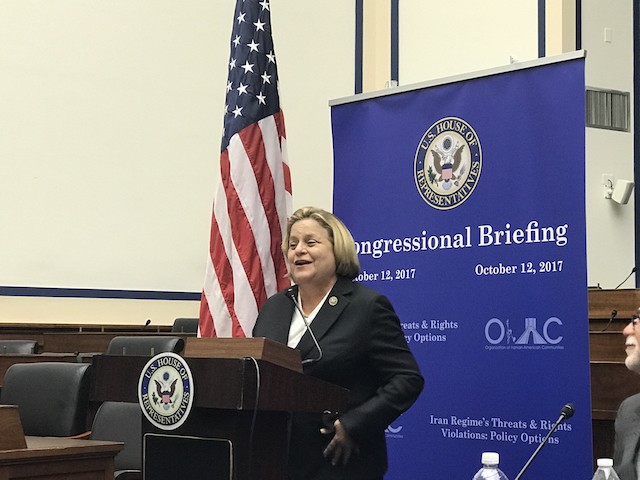 On Friday, President Donald Trump refused to certify the Iran nuclear deal to Congress. However, the United States is still technically in the deal. It remains to be seen if Iran exits the deal first.

“If it was not for NCRI, Iran would have already had a nuclear bomb,” Rafizadeh said, referring to the group’s revelation in 2002 that the Iranian regime was covertly developing a nuclear program. He added, “The international community should push for inspection of the Iranian regime’s military sites.”

Those “off-limits” sites are where the Iranian regime has allegedly been cheating.

Rep. Tom Garrett (R-VA), an academic by training, said he takes “to heart the inclination that those who do not know history are doomed to repeat it.” He added that the same “policy of appeasement” administered by the previous administration was similar to the “policy of appeasement that was popular in the 1930s that led to the rise of a German nation.” Garrett added, “If you know history, you know that they violated that treaty tenfold over and, ultimately, the result was calamity on a scale not experienced before that time.”

Dr. Ramesh Sepehraad said at one point, “We did have an armed opposition in Iran, but due to U.S. policy, unfortunately, that has changed.” She touched briefly upon instances throughout Iran’s history where the Iranian people pushed back against the regime. “It started with the first mass demonstration against Khomeini’s call for mandatory hijab, Islamic cover,” she said. “It happened on March 8, 1979, [when] there were more veiled women than non-veiled who participated in that demonstration to protest Khomeini’s call for compulsory veiling.”

Although there are increasing calls for the mandatory hijab to be made optional in Iran, the leader of NCRI, Ms. Maryam Rajavi, and the majority of women in the highly-organized opposition group, choose to wear a hijab.

Rep. Brad Sherman (D-CA) said of NCRI, “Much of the world has forgotten, but I will never forget that it was in August of 2002 that this organization brought to the attention of the world the fact that the Islamic Republic was enriching uranium in the Tans and was hell-bent on acquiring a nuclear weapon.” He added, “You also brought to the attention the heavy water plant in Iraq”: 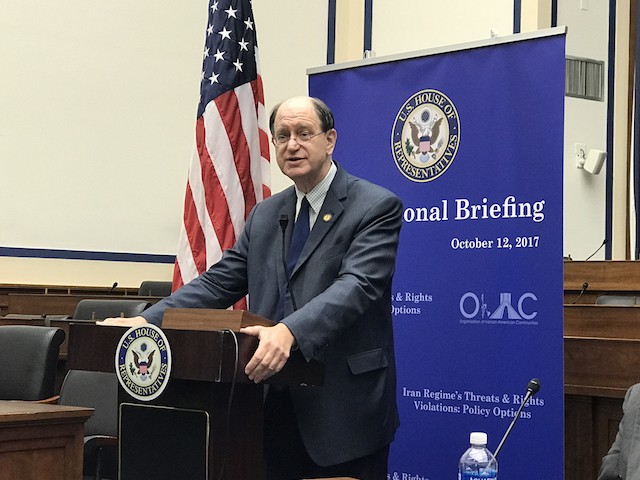 He continued, “When the Iran deal first came up, I broke with my party. I was the first member of Congress from either party to walk down to the floor and call for the U.S. to reject the Iran deal,” which he referred to as including “the good, the bad and the ugly,” as he has in the past.

Sherman said the real picture of the Iranian regime is that of 3-year-old Alan Kurdi, the Syrian boy whose body washed up on the shore of Mediterranean Sea, as symbolic of Iran’s mischief in Syria, the ensuing Syrian refugee crisis, and its support for Bashar al-Assad. However, many unanswered questions still remain about Kurdi’s untimely passing.

“The world will not be safe until the Islamic Republic is replaced with a new, democratic government,” Sherman said. 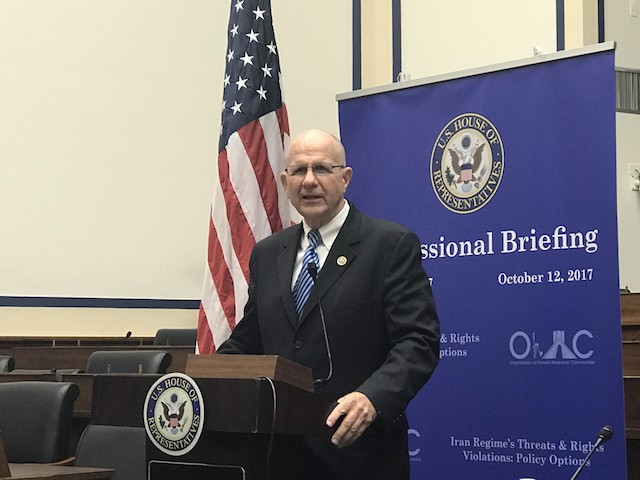 Poe said “Regime change in Iran should be our goal,” adding, “It should be our foreign policy. The fact that we had a chance in 2009 to come to their aid and we did not do that, we made a tragic mistake. And because we did not help, more Iranians have died.”

In closing, Rafizadeh suggested that “the soft power of the Iranian opposition is the thing that the Iranian regime fears the most. They fear this soft power more than the hard power of the United States.” He noted that “Iran is the top sponsor of terrorism in the region” and “the survival of this regime is based on anti-Americanism. … Being nice to this regime doesn’t work.”