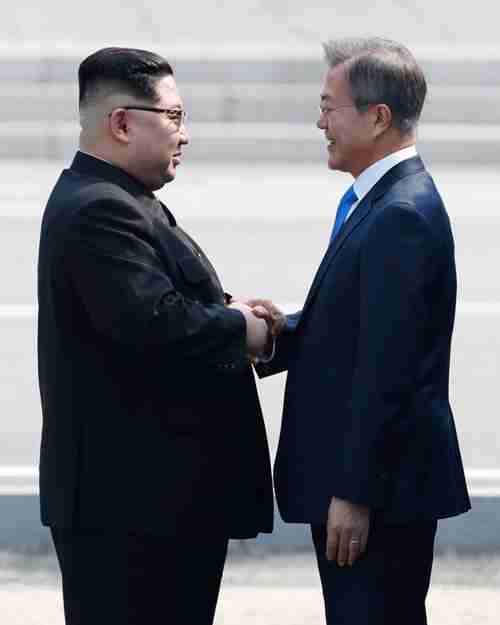 It was magical. South Korea’s president Moon Jae-in shook hands with North Korea’s child dictator Kim Jong-un, smiling sweetly at each other. As if they were euphoric lovers, they held hands and walked back and forth, crossing back and forth across the line dividing South and North Korea, in order to prove to the world that all was peace and light.

It is hard to guess what might be accomplished by this summit meeting, since the real summit will be held in a few weeks between Donald Trump and Kim Jong-un. Korea Times

When North Korea performed its most recent nuclear weapon test on September 3 of last year at the Punggye-ri nuclear test site, seismologists outside North Korea detected an “earthquake” that followed the test itself. Concerns were expressed that the earthquake was actually a partial collapse of Mount Mantap, where the Punggye-ri site is located, and that nuclear radiation had been released. Unconfirmed reports later said that tunnel collapses had killed hundreds of North Korean workers.

As we reported last year, Chinese geologists on September 20 were warning North Korean nuclear scientists that further nuclear tests at Mount Mantap risked a nuclear catastrophe, if the mountain collapsed in an explosion, releasing large amounts of radiation that could contaminate large regions of North Korea and northeast China for decades to come.

Now, two groups of Chinese researchers – one from the University of Science and Technology of China (USTC) in Hefei, and the second from the Jilin Earthquake Agency with the China Earthquake Administration in Changchun – have both reached similar conclusions: That Mount Mantap did in fact collapse after North Korea’s last nuclear weapons test on September 3 of last year.

“Seismology illuminates physical processes occurring during underground explosions, not all yet fully understood. The thus far strongest North Korean test of 3 September 2017 was followed by a moderate seismic event (mL 4.1) after 8.5 min.

North Korea detonated its strongest underground nuclear test in September 2017. It attracted the public interest worldwide not only due to its significant magnitude (6.3 mb) but also because it was followed 8.5 min later by a weaker event. Was the delayed shock a secondary explosion, an earthquake provoked by the shot, or something else? We answer these questions…. According to our model, the explosion created a cavity and a damaged “chimney” of rocks above it. The aftershock was neither a secondary explosion nor a triggered tectonic earthquake. It occurred due to a process comparable to a “mirror image” of the explosion, that is, a rock collapse, or compaction, for the first time documented in North Korea’s test site.

The USTC study is awaiting publication, but a summary says, “The occurrence of the collapse should deem the underground infrastructure beneath mountain Mantap not be used for any future nuclear tests.”

A Beijing-based analyst points out that another nuclear test at the site would destabilize not only Mount Mantap but also Changbai Mountain, the site of an active volcano at the China-Korea border. South China Morning Post and AFP and Geophysical Research Letters

Now the laughable news emerges that the nuclear test site is being shut down because another test would risk a nuclear catastrophe, according to Chinese scientists. As I wrote at the time, the North Korean concession was no concession at all, and in fact was the West’s worst nightmare, since Kim would keep his existing stock of nuclear weapons, would continue developing nuclear technology without open testing, and would undoubtedly sell the nuclear technology to other countries, including Iran.

Now it turns out that the North’s whole farcical announcement was a negotiating ploy to make use of the threat of further testing to lock in concessions before the West found out.

The collapse of Mantap Mountain represents a collapse of a major part of North Korea’s negotiating position. With the approach of the forthcoming meeting between Kim Jong-un and Donald Trump, Trump has said repeatedly that he was demanding denuclearization – that the North destroy all its nuclear weapons. Kim had the threat of reopening the nuclear test site and performing more tests. But now that threat is gone, and even though the North can do further nuclear development, they can never be sure that their developments will work unless they test them.

However, in another way, the collapse of Mount Mantap strengthens North Korea’s negotiating position. They can claim that if their nuclear test site is unusable, then the West should remove all sanctions, since they are no longer needed. BBC

The politics of the collapse of Mount Mantap

We live in a world where whether you believe 2+2 equals 4 or 5 depends on politics. So it is with the question of whether the Punggye-ri test site at Mount Mantap is still usable.

So let’s look at China’s motives. China would like to use the North Korea threat as leverage to force all US military forces out of South Korea. Also, China has for years been developing numerous nuclear missile systems with no other purpose than to destroy American cities, aircraft carriers, and military bases. China is preparing for a pre-emptive attack on the United States, and they would be delighted to have North Korean nuclear missiles pointed at the U.S., if only to be a distraction when the war begins.

But on the other hand, Chinese media makes it clear that, whether the Punggye-ri is theoretically still usable or not, China does not want any further nuclear tests there. The risk is too great, and a serious mishap could be a nuclear disaster that lasts for decades.

Those mixed motives would explain the suggestion that the USTC conclusions are being watered down to avoid reaching a final conclusion that the site is unusable. This ambiguity preserves the North’s negotiating position.

The website 38North, which is run by North Korean defectors in South Korea, is insisting that only a portion of the Punggye-ri test site has been damaged, and they conclude:

In short, there is no basis to conclude that the Punggye-ri nuclear test site is no longer viable for future nuclear testing. There remain two portal areas located in more pristine competent rock that can be used for future tests if Pyongyang were to give the order. Whether that will stay an option will depend on reaching verifiable agreements that build on Pyongyang’s pledge to shut down the facility.

There is no real evidence provided for this conclusion, and the motives of North Korean defectors are most likely to be that they do not want the North to get away with anything. In particular, they would want the sanctions to continue as long as possible. Washington Post and Global Times (China) and 38 North