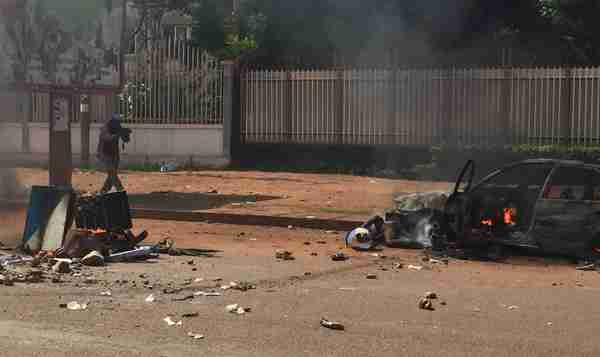 Aftermath of violence clashes in Bangui, CAR, on May 1 (Defense Post)

Sectarian Muslim versus Christian violence in the Central African Republic (CAR) has continued with armed groups and marauding gangs, both Muslim and Christian, almost nonstop across the country, since the violence began in 2013. The capital city Bangui has been relatively spared from violence in the last year, but this has changed in the last month, with sectarian attacks killing dozens of people, including attacks on a Catholic Church and a mosque.

The violence mostly took place in the PK5 district of Bangui. Bangui is a mostly Catholic city, but PK5 is a mostly Muslim enclave within Bangui. I wrote about PK5 in November 2015, when Pope Francis visited Bangui, and particularly paid a visit to the PK5 mosque.

The exact sequence of events isn’t completely clear, but it appears that the violence began early in April when MINUSCA, the UN peacekeeper mission for CAR, joined local CAR security forces to launch a joint security operation in PK5 to dismantle militia bases that were hiding out in PK5.

MINUSCA is the United Nations Multidimensional Integrated Stabilization Mission in the Central African Republic (CAR), launched in April 2014 as a peacekeeping mission. Unfortunately, there has been little peace for MINUSCA to keep. CAR is a huge country, and pretty much the entire country is in flames, so MINUSCA has mostly restricted itself to Bangui.

On April 10, the joint security operation turned into a bloody massacre, as the security forces battled several armed groups in PK5, known as the “self-defense forces,” a name that reflects lack of respect in the Muslim community for either MINUSCA or CAR’s current government. A total of 21 people were killed in a four-hour gun battle between the security forces and the self-defense forces, including a peacekeeper from Rwanda. 11 peacekeepers were wounded. AFP (9-Apr)

On April 11, hundreds of angry demonstrators from PK5 held a peaceful march in Bangui, and in a dramatic gesture, carried the corpses of 17 of the 21 who had been killed, and laid the corpses in front of the MINUSCA mission headquarters. According to one demonstrator:

“We, ourselves, no longer understand anything. Does their mission consist of shooting at civilians?”

We regret the fact that the bodies were being manipulated, while they should be buried like every person who dies.”

So-called Muslim “self-defense groups” have been springing up in PK5, claiming to protect the Muslim civilians.

The self-defense group ‘The Force’ gets revenge

One of the PK5 self-defense groups, “The Force,” got revenge on May 1 when gunmen attacked a service at a Catholic Church in Bangui. Some 2000 people had gathered for the service, when armed men threw grenades and fired on the church. The attack lasted for hours, killing a priest and at least 15 people from the church, and injuring hundreds more.

After attacking the church, the perpetrators moved into neighboring districts, looting shops and homes and attacking civilians. An Evangelical church member was killed outside his home.

“We extend our condolences to the parishioners of Our Lady Fatima Church, to the family of Albert Toungoumale Baba and to all those who have been bereaved.

The attack on a place of worship not only violates the right to freedom of religion or belief, but also threatens the social fabric of the community that religious leaders of all faiths have worked to maintain throughout the recent conflict.”

“Central African authorities and MINUSCA must send an immediate and clear message to all armed groups and their allies in CAR: No attack against civilians will be tolerated and all those suspected of committing war crimes and other serious human rights violations and abuses will be brought to justice.”

Despite Amnesty International’s laughable rhetoric, “No attack against civilians will be tolerated,” CAR is in a generational crisis civil war, and there’s no end in sight.

Although the CAR war appears to be entirely sectarian, that isn’t entirely true. The Muslims are mostly herders, while the Christians are mostly farmers, and this is the same kind of conflict between herders and farmers that I’ve described in Central African Republic, Rwanda, Burundi, Kenya, Sudan, South Sudan, Nigeria, and even America in the 1800s. As population grows, the farmers accuse the herders of letting the cattle eat their crops, while the herders accuse the farmers of planting on land that’s meant for grazing. If the farmers put up fences, then the herders knock them down. In CAR, there have been situations where Muslim and Christian farmers were united in fighting Muslim herders.

As I’ve explained in the past, CAR’s last generational crisis war was the 1928-1931 Kongo-Wara Rebellion (“War of the Hoe Handle”), which was a very long time ago, putting CAR today deep into a generational Crisis era, where a new crisis war is increasingly likely. ( “2-Oct-15 World View — Violence resurges in Central African Republic crisis war”)