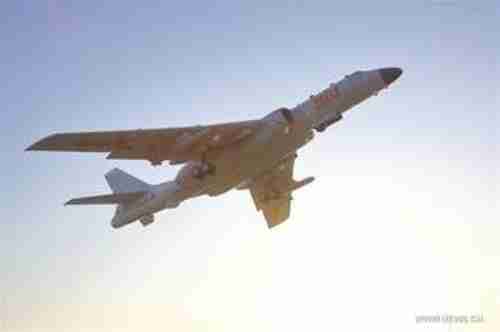 While 99 percent of the world was hypnotized by Markle Sparkle, China made a major escalation in its illegal militarization of the South China Sea and said it was preparing for war.

China announced on Friday that it has begun landing bombers on the artificial islands it created in the South China Sea, in preparation for the Battle of the South China Sea. The announcement appeared on China’s Ministry of Defense website:

A division of the Air Force’s aviation division has recently organized multi-model multi-bombers such as the -6K to carry out training on islands and reefs to take off and land in the southern seas, tempering the ability to “reach all regions, conduct full-time air strikes, and strike in all directions.”

The aviation division equipped with the H-6K and other multi-type bombers, keeping in mind the strategic requirements of “ideological and political should be strong, have good skills to fight and must be strong in fighting style”, are fully committed to advancing training in the new era and are preparing for the West Pacific and the Battle of the South China Sea.

This is another major escalation in China’s preparation for war. The bombers are landing on the artificial islands that China constructed in violation of international law, as the United Nations Permanent Court of Arbitration in the Hague ruled that all of China’s activities in the South China Sea are illegal.

China has repeatedly lied and hidden its true intentions. Originally, the artificial islands were going to be for tourists and scientists, which was a lie. Then the military installations would be purely defensive, which was another lie. And now they are part of a massive militarization in anticipation, when preparation has been completed, to launch a full-scale war on America and its allies. Chinese military facilities in the South China Sea include air bases, radar and communications systems, naval facilities, and defensive weaponry, including landing strips able to accommodate military planes.

Friday’s announcement referred to the artificial island off Woody Island, in the Paracel Islands. It is believed that this island is a blueprint for deployments to the Spratly Islands farther south, at its outposts at Subi, Mischief, and Fiery Cross Reefs. In all cases, these reefs can accommodate bombers, as well as large transport, patrol, and refueling aircraft. China Daily and China Ministry of Defense (Trans) and Asia Maritime Transparency Initiative (CSIS/AMTI) and Popular Science

On June 16 of last year, China sent troops and construction workers to begin road construction in Bhutan’s Doklam Plateau, with the apparent intention of annexing the region. At Bhutan’s request, India sent in troops to prevent the annexation. Tensions escalated for weeks, and then, suddenly and unexpectedly on August 28, the crisis ended when China backed off.

In the meantime, satellite images show that China has increased its military buildup in Bhutan’s Doklam Plateau. China has positioned thousands of troops and built two helicopter platforms, and dozens of houses and stores.

Donglong (Doklam) belongs to China because we have historical conventions. China’s activities there (Doklam) are within our sovereign rights. There is no such thing as changing status quo.

Furthermore, it emerged that Chinese troops have made new roads and other construction to gain access to another region of Bhutan. So few people doubt that China has not given up, but is moving forward with a large military buildup to use for an invasion at a time of its choosing.

As we reported last week, China says that the reason that it is performing aggressive military exercises around Taiwan is with the intention of threatening Taiwan. Once again, China is preparing for an invasion of Taiwan at a time of its choosing. Similar aggressive moves are occurring around Japan’s Senkaku Islands in the East China Sea.

China has repeatedly hidden its intentions and will continue to do so until it is prepared to launch its attack. China is following exactly the same path that the Nazis followed. Xi Jinping’s “Socialism with Chinese Characteristics” is the same as Hitler’s National Socialism. Like the Nazis, the Chinese leadership believe that they are a Master Race that will conquer the world. New Delhi TV and The Print (India) and South China Morning Post (Hong Kong) and The Diplomat