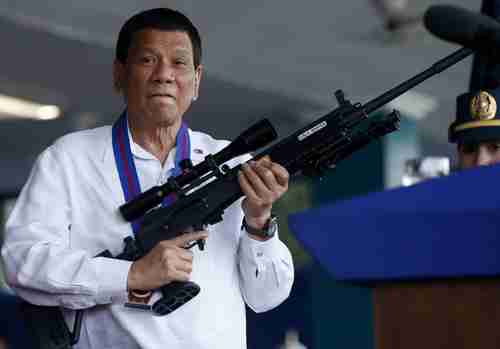 Ever since taking office, Philippines President Rodrigo Duterte has sided with China, refusing to take a position opposing China’s illegal activities in the South China Sea. This is particularly ironic for the president of the Philippines, since it was the Philippines that brought the lawsuit in the United Nations Permanent Court of Arbitration in the Hague, which ruled that all of China’s activities in the South China Sea are illegal and in violation of international law.

As recently as two weeks ago, Duterte was defending his refusal to challenge China’s activities in the South China Sea. Duterte said that the court ruling came before he took office, but he had no choice but to support China anyway:

It did not come during my term. But then again, if I were the President at that time, what could I have done? I can send my Marines there. I can send every policeman there. But what will happen? They will all be massacred.

So Duterte’s Foreign Affairs Secretary Alan Peter Cayetano on Tuesday announced that Duterte is setting some “red lines” which, if crossed by China, would lead to war:

What is our red line? Our red line is that they cannot build on Scarborough [Shoal].

Another red line is: Nobody can get natural resources there on their own.

That’s what the president said. If anyone gets the natural resources in the West Philippine Sea-South China Sea, he will go to war. He said: ‘Bahala na.’ He will go to war. So those were our red lines.

According to the internet, “Bahala Na!” is a Tagalog expression that perfectly encapsulates the typical Filipino attitude towards life. The oft-used phrase Bahala Na can be translated into English as: Come what may. What happens will happen. Scholars tend to label it as a form of fatalism. Inquirer (Philippines, 21-May) and Philippines Star and Tagalog Language

Two U.S. Navy warships conducted a freedom of navigation operation (FONOP) on Sunday in the South China Sea, near islands occupied by China in the Paracel Islands. This is the location where, as we reported several days ago, China is building barracks capable of housing thousands of soldiers.

According to China’s foreign ministry:

The US Warships’ unauthorized entry into China’s territorial waters off the [Paracel] Islands again has violated the Chinese law and relevant international law, severely undermined China’s sovereignty and put in jeopardy the peace, security and sound order in relevant waters. China expresses strong dissatisfaction and firm opposition to the relevant act of the US, and strongly urges it to immediately stop such provocation that infringes upon China’s sovereignty and threatens China’s security. China will continue to take every necessary measure to safeguard its sovereignty and security.

The “relevant international law” is the Tribunal ruling that all of China’s activities in the South China Sea are illegal, which means that Chinese officials are international criminals.

Relations between the U.S. and China in the South China Sea are becoming increasingly hostile. China is building hundreds of buildings on its illegal islands, as we recently reported, allowing thousands of troops to be stationed there.

The U.S. responded by withdrawing an invitation for China to take part in the 2018 Rim of the Pacific Drill, because China’s activities in the South China Sea “raise tensions and destabilize the region.” This was followed by Sunday’s FONOP, which was different from previous FONOPs because it used two warships instead of just one.

China’s foreign ministry threat was followed by reports that the U.S. Navy considers that the actions of Chinese warships on Sunday was “safe but unprofessional,” because the Chinese ships maneuvered erratically.

In the last two days, there have been additional reports about China’s militarization of its illegal islands.

China announced that it has set up an “intelligent microgrid” that will supply electricity to weapons systems on all of China’s artificial islands. According to Chinese media:

The service life of weaponry can be extended by reducing their reliance on self-contained chargers, Song told the Global Times on Monday.

Stable electricity was also critical at armories and arms depots for handling the high temperatures, humidity and salinity of the islands, Song noted.

According to another report in Chinese media, China is aggressively developing its next generation of nuclear weapons:

China is aggressively developing its next generation of nuclear weapons, conducting an average of five tests a month to simulate nuclear blasts, according to a major Chinese weapons research institute.

Its number of simulated tests has in recent years outpaced that of the United States, which conducts them less than once a month on average.

Over the past three years, Chinese nuclear scientists have performed more such tests than their American counterparts have in 15 years.

In tunnels deep under mountains in Mianyang, southwestern Sichuan province, where China’s main nuclear design facilities are based, loud blasts from these experiments can be heard more than once a week.

In comparison, between 2003 and 2017, the US fired a total of 150 simulated shots at its Joint Actinide Shock Physics Experimental Research (Jasper) facility at the Nevada National Security Site.

These new military developments seem to be coming more and more quickly, as if China is rushing to meet a target date to launch a war. I have seen one estimate that the target date is 2020, but it could just as easily be 2019 or 2021. Foreign Ministry of China and AP and Global Times (Beijing) and South China Morning Post (Hong Kong) and Sputnik News (Moscow)